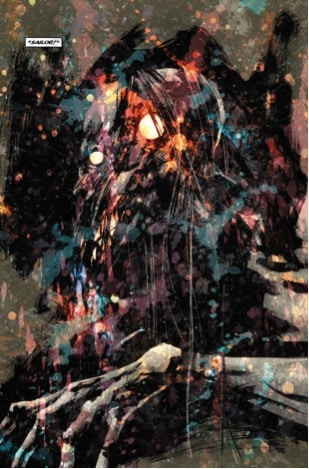 Wytches is ominous, atmospheric and outright disturbing. Scott Snyder is no stranger to tackling the downright, in your face, realm of horror. His work on multiple titles that fully embrace the horror genre or just feature elements from it are stellar. Severed from Image featured an array of images that were sure to crawl into your dreams/nightmares at night thanks to Scott Tuft and Attila Futaki’s illustrations, American Vampire continues to impress at presenting an alternative and fresh take on vampires due in thanks as well to Rafael Alburquerque’s stunning art, and Batman even ventures into the realm of the unsettling and horrific. Wytches takes what has worked so well on Snyder’s other projects by taking a beaten down genre and presenting a unique, twisted and ultimately fresh vision with an excellent show of talent from everyone on board.

Snyder may be the captain of the Wytches ship, but Jock’s images, alongside Matt Hollingsworth’s colours, are the two confident navigators. Not to belittle Snyder’s scripts in any way, as he has excellently presented a personal story about family and fatherhood within the characters, but the artwork really sets the tone. Wytches may be one of the few titles out there in which every time I read an issue, my mind and heart simultaneously clash in excitement and fear of what is about to greet my eyes upon flipping to the next page. Jock’s visceral spreads of the shadowed forest with the glowing eyes of the warped wytches alongside Hollingsworth’s literal splashing of colour made Wytches one of the most visually unique comics of 2015. 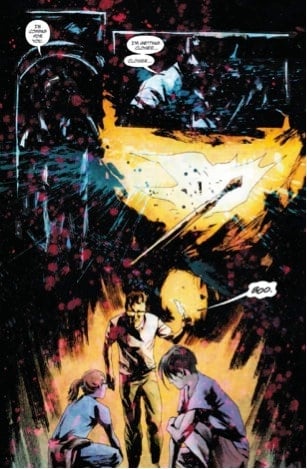 he environments within Wytches not only grasp Sailor and her mysterious connection to the wytches, they call and beckon to the reader; at least, that is how I felt while reading alongside Sailor and the Rook family, month by month. Perhaps that is why I put Wytches at the bottom of my reading pile; not to say I couldn’t wait to read it, but more so allowing a buildup to the eventual late night reading of the issue before I went to bed. Jock’s art evokes a true sense of terror with illustrations that stretch the imagination into areas unknown to our basic reality. Hollingsworth’s colours emerge scattered over these images at times, utilizing a kaleidoscope of reds, greens, blues, yellows, etc., to really play with the emotions of the reader. With Snyder’s rising tension, Jock and Hollingsworth deliver the terrifying punch.

The first arc could stand alone as a mini-series, but the emotional and unexpected fallout from the last issue only begs to wonder the direction that the creative team of Wytches has planned. Only a poster with 2016 on it has been released to suggest the next arc is on its way, solidifying Wytches Vol.2 as one of my most anticipated comics of the year. “Pledged is still pledged.”