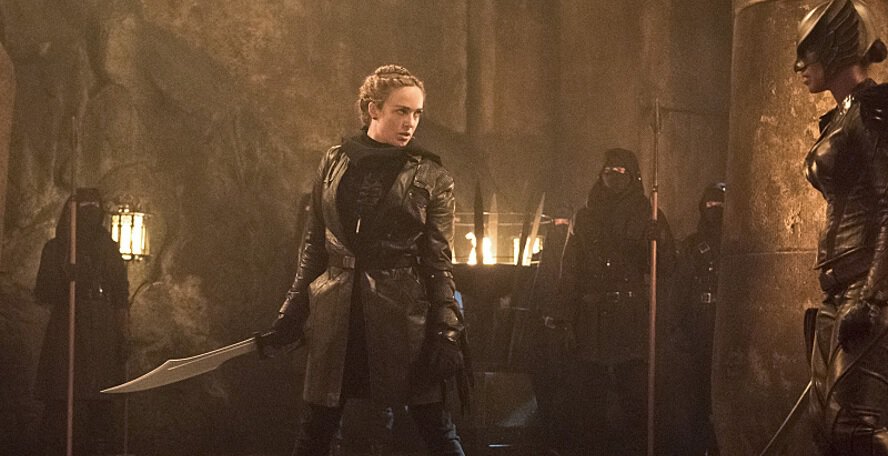 After a two-week hiatus, DC’s Legends of Tomorrow returns with an episode in which a surprising amount happens, yet not a great deal changes. A major plot twist is introduced, however – the identity of Chronos –  which will have ripple effects in episodes to come.

When we last saw the team, Kendra, Ray, and Sara had been stranded in 1958 when the rest of the team inadvertently flew away while under attack from Chronos the Time Pirate* (*not an official monikor. Sounds better than bounty hunter). Chronos kidnaps Snart and escapes, leaving the ship temporarily stuck in the temporal zone. On Earth, Sara, being of a logical and also extremely pessimistic bent, concludes after 10 minutes of waiting that they’re never going to be rescued, because the team should have been able to time-jump right back to this moment. After some time, Kendra and Ray give in, and…fast-forward two years, because that’s how long these three are stuck there. Kendra and Ray, against absolutely all odds, are living together in a stable, serious relationship, while Sara has disappeared to follow her own path.

Rip, Doctor Stein, and Jax return in the Waverider in 1960 and pick up Kendra and Ray, the former of whom is extremely excited to return to a the world of superheroes and wearing jeans, while the latter is openly disappointed to leave the couple’s happy domesticity. They then set out to “rescue” Sara, whom they discover has joined (or re-joined, since in her timeline she’s already been a part of it) the League of Assassins. In one of the show’s more patronizing moments, Rip announces that Sara, who clearly has survived on her own just fine for the past two years, must be in trouble and definitely needs help. The team jets off to Nanda Parbat, the headquarters/secret lair of the League, and perform a ham-handed and incredibly talkative attempt to break into the home of the deadliest assassins on earth. It’s a miracle each and every last one of them wasn’t slain on the spot. 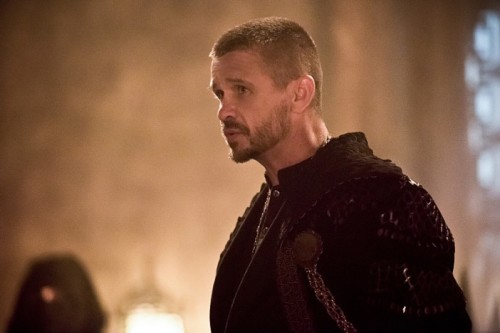 Legends of Tomorrow doesn’t embrace its own cheesiness, so it’s not cheeky, over-the-top fun as it could have been, yet it’s also not consistently well-written enough to be taken seriously. This episode, as with most others, skirts awkwardly between the two without ever quite settling on one: much of the team’s reunion, dialogue, and attempts to break into Nanda Parbat are so overtly cheesy that you expect a jangly, 80’s-esque riff to hit the soundtrack at any moment to signal the intended comedy – but it never does. Meanwhile, the final one-fourth of the episode, with the team in conflict with Ra’s al Ghul and then Chronos,  is much more convincing with its stakes and action, but quickly follows this with a heavy-handed sequence of the team one by one agreeing in sentimental fashion to attempt to save Mick Rory.

Which brings us to the episode’s central twist, and a definite highlight of the series so far – the revealing of Mick Rory as the team’s highly-trained, indomitable pursuer and opponent, the bounty hunter Chronos, who works for the Time Masters. This is an unexpected twist, deftly delivered in that it wasn’t even hinted at until very recently, and finally delivers – however briefly remains to be seen – something the show has been lacking – a complex and threatening villain. Randall Savage has always been a little too cartoonish to really hold up that mantle, but the ruthlessly efficient and driven Chronos, hidden behind his faceless mask, is a much more convincing villain, particularly with the  mantle of the emotional weight of the team’s attachment to him. How far the show will take this remains to be seen, since at the end of the episode, Mick has been captured by the crew and locked up in the Waverider’s brig to be “rehabilitated.”

The episode introduces two important time-travel concepts, though both are referenced almost entirely without explanation. Firstly, the Vanishing Point – Mick says that it’s a place where time runs differently, and he was taken there by the Time Masters and trained over several lifetimes (dying and regenerating) into the deadly hunter he is today. Secondly, there’s the concept of “time drift”, explained off-the-cuff by Rip as what happens when someone spends too long in a foreign timeline and loses track of their real identity. Both are a fascinating, and necessary-seeming, part of the show’s mythology, yet given no explication whatsoever, contributing to the many instances of the show’s shoddy, poorly constructed portrayal of space, time, and how space and time affect humans. Sara has undergone a near-complete, if reversible, identity change and memory loss, and Ray’s bizarre contentment in 1960 is also attributed to “time drift” – is it a magical effect? Scientific? What are the rules? How can it lead to individual memory loss? So many questions, and not a one of them answered.

A fun episode that covers a lot of territory: reuniting the team, developing Kendra and Ray’s relationship, rescuing Sara from the League of Assassins, and revealing Chronos’ identity while forcing a confrontation between him and Snart. There is a slight sense of rest however when the episode ends, as it always does, with the team all back on the ship, headed into time to find Savage. The limitation of a superhero show is always the unspoken understanding that certain characters won’t be killed – but ideally Legends can at least maintain this fast pace in the next episode.

“I used to think the most beautiful thing on Earth was fire. Now I know – it’s vengeance.”