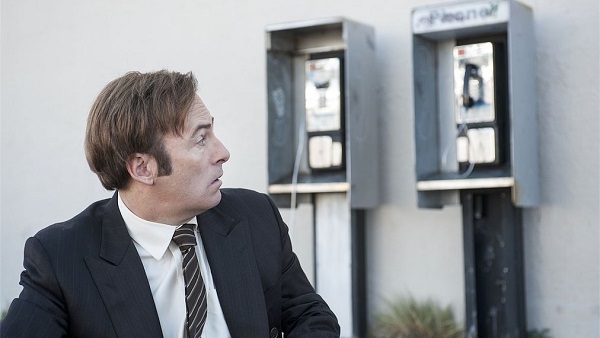 Better Call Saul‘s latest makes for a stressful hour, right from the get-go.

The episode opens with another time-jump, as we’re given our first glimpse of this “Slippin’ Jimmy” we’ve been hearing so much about. Saul/Jimmy appears in prisoner garb as he implores his older brother to pull him out of his mess. A couple of nuanced referential moments occur, one in a shot that is a direct reiteration of the scene in the pilot where Saul empties his pockets to visit a distressed and mentally ill Chuck. The other callback occurs when Chuck simply stands up and calls for the guard in the middle of Saul’s manipulative diatribe, showing, quite clearly, that he can see through his brother’s shtick. 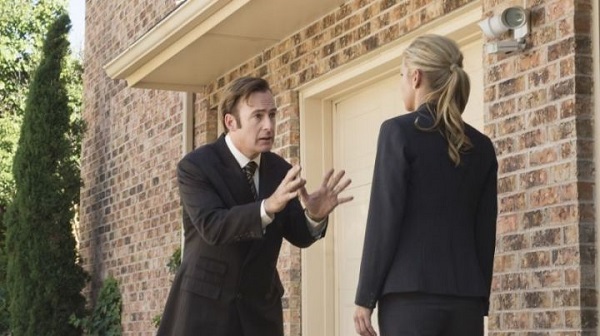 That Saul’s routine remains so consistent makes for some of the episode’s most subversive comedic moments, especially as it continues even when its subjects aren’t around to see it. Note the careful hand gestures and friendly mannerisms that occur even when Saul is only talking to, say, a bathroom stall or a street-side payphone. Scenes like this suggest that Saul can’t go half way and that when he turns it on, it’s all the way on, every time.

Saul’s struggle remains incredibly effective as it unwinds under a new set of circumstances. The irony that trying to do “the right thing” causes him so much trouble should not be lost on anyone who carefully watched Breaking Bad. In fact, there is another deliberate shot-for-shot wink in BB‘s general direction in a scene where Saul’s car is approached by a couple of dangerous looking men, just as he gets off of the phone. This scene is used for even more subversive effect when the men chasing him turn out to be cops, rather than felons. 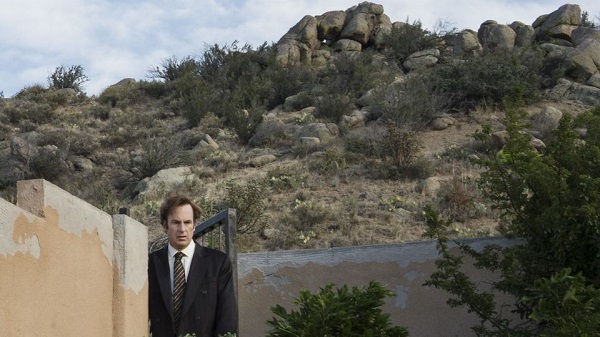 Speaking of cops, former police officer Mike Ehrmantraut finally gets something to do aside from provide dry comic relief, as his counsel eventually leads Saul to the conclusion of the episode, in which he finds “Team Kettleman” camped out in the desert a few kilometers behind their house. Now that we’ve seen Saul and Mike’s first amiable exchange, it will be much simpler to ease into the casual rapport that these characters will eventually share, likely sooner rather than later, as Jonathan Banks is currently the second-billed cast member on Better Call Saul.

“Nacho” also gives Saul’s sprite-like blonde competitor, Kim Wexler (a character you might have barely caught in the montage that ended last week’s episode) her first real screen time. Kim and Saul seem to have a somewhat friendly, if complicated, relationship and the hard-nosed demeanor that she uses to deal with him suggests that we can add her to the list of people who won’t fall for the standard line of BS he generally wields so effectively.

All in all, “Nacho” is a carefully balanced hour, one that expertly melds the comedic chops of Odenkirk and company with the sweat-dripping, suspense-fueled dramatic elements that sold every episode of Breaking Bad like that old baby-blue on the street corners of Albuquerque.