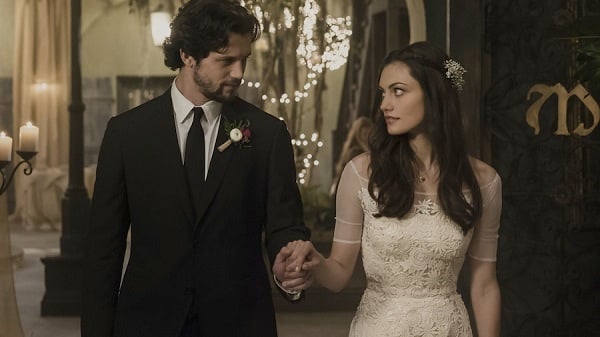 The Originals, Season 2, Episode 14, “I Love You, Goodbye”
Written by Michael Narducci and Carina Adly MacKenzie
Directed by Matt Hastings
Airs Mondays at 8pm (ET) on The CW

On this week’s The Originals, Hayley and Jackson tie the knot, Elijah hinders Klaus from murdering Jackson, Hope returns home, and Kol succumbs to Finn’s curse.

“I Love You, Goodbye” would be a relatively flawless episode–emotional and beautiful and well-done–if it weren’t for one fatal flaw: The Originals‘s insistence that death doesn’t mean one is permanently dead and gone. Seriously, the episode is borderline fantastic, and it expertly welds the happy moments with the tragic, until Rebekah insists, as Kol dies, that she will do anything to bring him back. And, looking at the show’s history (even in the episode itself, where someone is literally brought back from the dead), there’s almost no doubt that she will succeed.

This begs the question: what, exactly, is the point of Kol’s apparent death? The scene is emotional, for sure, and Daniel Sharman is absolutely incredible as he nails all of Kol’s regret and despair and desperation about dying, but, by the end, the whole thing feels like a cheap ploy to wrench some emotion out of the audience. Quite honestly, Kol’s death feels very hollow and unnecessary. If death is just an obstacle to be overcome, then how can it possibly mean anything? Also, if Kol is brought back (and, despite how great of a character he’s turned out to be, here’s hoping he’s not, for the sake of the story), then the show loses all of its potential to explore what mortality means to a group of immortals. Despite all of the death that happens around the Mikaelsons–and there’s been plenty–who has ever really died, and stayed dead, in a way that’s deeply affected them? This would be a far more intriguing and enriching path to explore.

Of course, the highlight of the episode is Hayley and Jackson’s werewolf nuptials. Several genuinely charming, and sad, moments arise pre-wedding, particularly in regards to Hayley and Rebekah and Hayley and Elijah. The former works because Hayley has never quite been called a Mikaelson, despite her permanent ties to the family, and it’s a nice touch for Rebekah to remind her that she’ll always be a member of the family. The latter works, naturally, because Hayley and Elijah have a very tension-filled but deeply affecting relationship. Their pre-wedding scene together is lovely in a very quiet and touching way, especially given how Elijah’s been struggling so much lately. He’s spent his whole life denying himself what he wants for the sake of his family (especially Klaus), and Hayley’s no exception. When Hayley mentions how open Jackson is about his feelings, as opposed to Elijah, who keeps them buried, she’s outlining his whole recently-developed dilemma. Elijah’s so concerned with appearance and peace and his family that he keeps his own desires hidden. No wonder he’s on the verge of snapping.

Back to the wedding, the vows themselves are very sweet–especially the bit about being one another’s family, because family is the number one theme of this show–and the shots afterwards, of everyone’s gold werewolf eyes, are a nice touch. Another plus to the wedding is how it re-examines Josh and Aiden’s subtle but charming relationship; the pair haven’t gotten much screentime together thus far, but The Originals is handling their delicate interspecies relationship very well. Also, Hope is finally introduced to everyone! There’s no way that will end badly…

Character-wise, “I Love You, Goodbye” succeeds at examining various relationships across the show’s cast and by delivering several very heady and emotional moments; however, the death issue will undoubtedly continue to be a problem going forward–just because the Mikaelson’s are blessed with immortality (though Finn and Kol were mortal) doesn’t mean they should be invincible, or the stakes against them will never be very high.