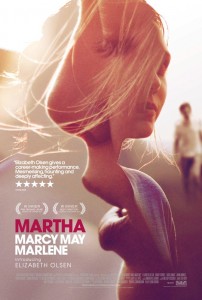 Even from its title the film Martha Marcy May Marlene suggests a fracture of psyche, a yearning for identity that provokes a young woman’s hypnosis and subsequent evasion of a sinister cult in the American hinterlands. The debut feature of Sean Durkin the film has already attracted favourable comparisons to Malick’s Badlands, another celebrated first feature, with its fairy tale patina aligned with more corporal horrors it was one of the smash raves at January’s Sundance festival where it immediately picked up a global distribution deal with Fox Searchlight after a series of rapturous screenings. Whether or not this is the herald of a major new American talent only time will tell, but on the strength of this astonishing debut I know where I’m placing my bet, as it is certainly one of the most assuredly original films of the year.

Martha (a revelatory Elizabeth Olsen, of the kiddie friendly Olson twins no less) is a fragile young women who mysteriously flees a remote farmhouse deep in the Catskill Mountains. After calling a

nameless relative at a local truck stop she is approached by a young man, another inhabitant of the farm, who smoothly and perniciously warns her of the consequences of abandoning her kin. Safety is temporarily assured when Lucy (Sarah Paulson), her soon to be established older sister takes her into her summer home whilst gently quering her whereabouts of the past two years, as wider hints of their shared history and difficult past relationship is progressively revealed. Lucy has recently married Ted (Hugh Dancy), a wealthy young architect whom has little time for Martha’s critques of his alleged consumerist values and it soon becomes apparent through her socially transgressive behavior – bathing nude in the local lake, interrupting their lovemaking sessions without any sense of privacy, a paranoid certainty of being observed  – that she has not simply fled from a failed romance, and darker forces have been exploiting her frail emotional security. As her behavior becomes more and more erratic Lucy and Ted are forced to consider professional incarceration and an attempt of re-programming her anima, if her surrogate cult sisters and brothers don’t find her first….

The devil is often in the detail, and  it is the ambiguities and opaque conditioning of Martha Marcy May Marlene that make it so bewitching, as you are never quite sure of the subjective truth of Marcy’s viewpoint, of her recollections or potentially programmed opinions, so the film levitates in a woozy dimension caught between this world and the next. That dreamy, slightly bewildered aura is achieved through an astonishing performance from Elisabeth Olsen whom in one stroke has obliterated her child star persona, she has that slightly fractured, imperceptibly damaged and hesitantly dangerous aura of a younger Maggie Gyllenhaal, and in the films frequent close-up reaction shots her soul bearing eyes become entranced by affection or terrified into paralysis by the communes activities, it’s spellbinding film-making through imagery that recalls the frescos of Dreyer’s The Passion of Joan of Arc. These communions and much of the film is captured with short, flat lenses that flatten the foreground and recede the background planes into focus stripped blurs, an apt visual metaphor for the world of Marcy internalizing her life at the expense of the exterior world and her previous life. It’s exhilirating to witness such an original, unusual and unreliable central character, and telling her story through the literary equivalent of the unreliable narrator keep viewers on their toes, maybe Olsen has managed to transmit some of her personal experiences of growing up in as a bubble wrapped superstar moving from adolescence into a confused and dazed adulthood?

Fragmented time structures and jumbled narratives are nothing new, even before the technique was abused ad nauseam by a wake of filmmakers’ aping Tarantino’s narrative pilfering for his influential Pulp Fiction (1994), but the mark of a true artist is how these fractures and saltations incrementally reveal key information and detail, through a technique that in itself reflects the characters emotional and psychological core. In Marcia¼ the beautifully executed match-cut flashbacks are fluently weaved into the film, which slowly paint a portrait of deteriorating anxiety. The wider questions of why Martha would embrace this dark, surrogate family are left unasked and the film is all the more powerful for it, as both sisters hesitantly attempt to reconnect and Lucy patiently unearths the details of her sisters ordeal some truly affecting and gripping scenes evolve between the two actresses, both of whom are on nigh perfect form. John Hawkes acquits himself admirably as Patrick, the coolly malevolent cult leader, although the degeneration into a Manson or Koresh like demagogue is expected his journey is throughly convincing, with an execution of quiet menace and psychological brutality. American independent films over the past few decades often seize upon overly quirky characters or deliberately obtuse narratives (hey, let’s make a film about having sex with mom? Heck, my families crazy ‘cause my granddad is a sex mad pensioner who keeps saying ‘fuck’) but Martha Marcy preaches a sermon of quiet perfection, and you simply must commune with one of the most vibrant films of the year, with it’s brave and divisive finale you’ll be chanting hallelujah.