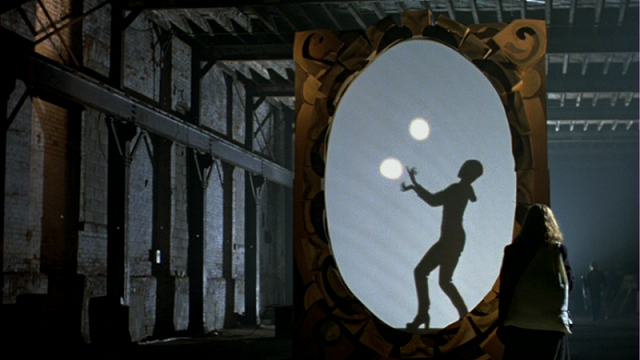 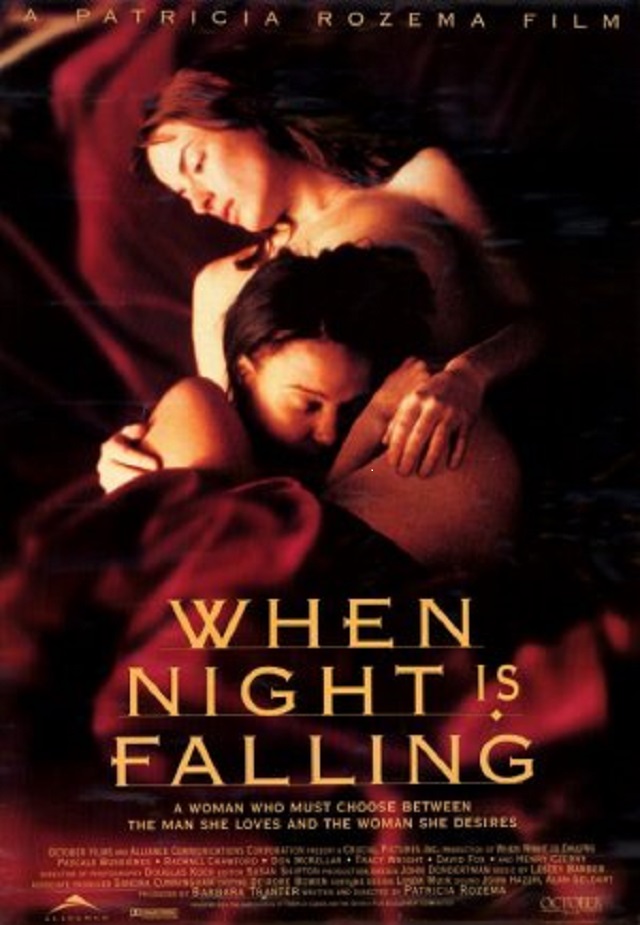 When Night Is Falling
Written and Directed by Patricia Rozema
Canada, 1995

There is an oft-repeated story about filmmaker Patricia Rozema’s introduction to the cinema. Raised in a family of Dutch Calvinists in Kingston, Ontario, she was not allowed to attend her first film until the age of 16, when a date took her to see The Exorcist. In interviews, Rozema confided that she was haunted by the movie’s terrifying images for days afterward.

The media focused on her unusual film-going past when her directorial debut, I’ve Heard the Mermaids Singing, became an unexpected Canadian and international smash in 1987. It was commonly referenced to underscore her ironic choice of career given the circumstances.

However, the anecdote has more personal relevance for me. In a way, it’s a mirror image of my own experience seeing Rozema’s third film, When Night Is Falling, when it was released in 1995. I also had a very religious upbringing, and while I was allowed to attend movies, I was sent to strict parochial schools that told me being a lesbian was a very bad thing. That proved awkward because that is exactly what I am. Luckily, I managed to reject the idea that being gay is morally wrong by my late teens. Actually being open about who I was, however, was a more difficult process for me. At the age of 24, I still suffered severe embarrassment each time I walked into suburban Detroit’s lone lesbian bookstore (now closed) or picked up the local LGBT paper from a public bin. So, when I walked into an art-house theater to see When Night Is Falling–the first “lesbian” film I’d ever screened outside of my bedroom–my heart was quivering, my cheeks were burning, and when I tried to ask for a ticket, my tongue stuck to the roof of my mouth. I didn’t feel comfortable until I was safely in my seat and the theater lights were dimmed. Like Rozema, the images I saw onscreen haunted me for days. But, unlike her, it was because I found them beautiful, erotic, and hopeful.

When Night Is Falling centers on Camille (Pascale Bussières), a seemingly conservative French Canadian mythology professor at a tweedy Calvinist college in Toronto. She is engaged to Martin (Henry Czerny), a theology professor who teaches his class that society is tired of constant change and longs for the immutable truth of religious certainty. Meanwhile, Camille tells her students that “the human need for change, progress, and movement is reflected in the ancient stories” of mythology.

On the surface, their lives as budding career Christians seem ideal. They’re young and appear to be in love–their pre-marital hookups are a bit of an open secret. They enjoy a shared language of tradition but are also hip enough to wink at the outdated dogmas of their religion.

“Remember, Martin, Calvinists are not supposed to have sex standing up,” Camille teases.

“I know, because it might lead to dancing,” Martin quips.

The college wants to promote Camille and Martin to co-chaplains on the condition they de-scandalize their relationship with a marriage license. The offer is clearly all Martin has ever hoped for. For Camille, however, the prospect seems to needle at a vague, unnamed discomfort she’s long tried to ignore.

Cracks in the facade begin to appear when Camille’s beloved terrier Bob trots away from her office and drops dead in an alleyway. Unable to deal with his sudden loss, she makes the odd choice of placing his body in her refrigerator and heads to the laundromat. There she breaks down in front of Petra (Rachael Crawford), a free-spirited performer with a traveling circus, and tearfully admits that she loved her dog more “anyone I’m supposed to love.” Petra warmly offers comfort, but opportunistically mixes up their laundry to ensure they meet up again. 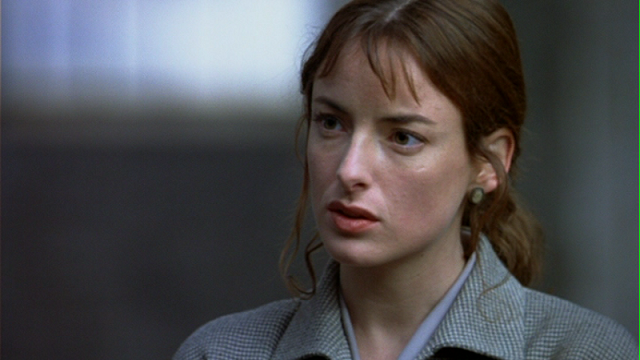 Petra’s plan works and Camille soon wanders from the rigid confines of the college to the vibrant circus grounds with a bag of laundry thrown over her shoulder. Propelled along by a mildly menacing synth beat, she encounters performers in various stages of undress, tattoos and gender fluidity. This lush environment is not only startlingly different from her own, but it features flamboyant freaks and literal fireballs. It’s a landscape that could appear hellish to the devout or playful to someone ready to waver. Both possibilities flash across Camille’s features.

Once Camille finds her way to Petra’s warm, womb-like trailer, scotch is poured and confessions are made. Camille admits she wore one of Petra’s racy tops–to a meeting at the college, no less–and Petra brazenly responds that she wants to see Camille “in the moonlight with your head thrown back and your body on fire.” The bold pick-up attempt offends (or thrills) Camille and she bolts back to her own world.

But Petra is smitten now. The next day, she plays Cupid (complete with outfit) and shoots a plastic arrow bearing a sexy photo and her phone number through Camille’s open apartment window. The sunlight slowly glides across Camille’s living room wall as she ponders her response. She eventually lets Petra into her foyer and initiates a hesitant, tender kiss before dashing off again.

Though Camille is clearly flustered by her encounters with Petra, they also bring suppressed parts of her personality and beliefs to the surface. She mentions orgasms in front of the retiring chaplain, tells the college interview board that she doesn’t think God would be so cruel as to create people “like that” only to command that they can never be fulfilled, and becomes more sexually bold with Martin.

When Martin suggests they get married regardless of the outcome of the job offer, Camille tries to discourage Petra, saying they should be friends “like Thelma and Louise, just without the guns.” But Petra’s determination–she insists on taking Camille on a terrifying but exhilarating hang gliding ride–and the unexpected chance to experience true love prove too much. When Martin leaves for an out-of-town theology conference, Camille again finds herself on the circus grounds.

What follows is a languid, gorgeously shot sex scene that the MPAA infamously–and predictably, given the board’s historically patriarchal and puritanical bent–slapped with an NC-17 rating. Rozema appealed the decision but lost, so she chose to release the film without a rating. Revisiting the uncut footage from the vantage point of 2015, it is deeply sensual but not overly graphic. In fact, Camille’s sex scene with Martin is more overt. But the raw intimacy between the two women is beautifully captured, and its frank depiction of some of the mechanics behind female pleasure is a rare and welcome sight, even by today’s standards.

After this moment, there is some back-and-forth melodrama–including the fraught burial of poor, refrigerated Bob–as Camille’s former life goes through its death throes, but the outcome is no longer really in question. Despite their disparate backgrounds, Camille and Petra have developed an uncommon bond, and Bussières and Crawford make it feel truthful. Besides, there’s a financially strapped traveling circus in town, and movie tropes demand that characters be compelled to hop on or jump off.

Visually, When Night Is Falling is stunning. Its cinematography is lush and lyrical, and Rozema makes beautiful use of symbolism to tell her romantic tale. For instance, the film opens with dreamy underwater images of a nude Camille, her red hair fanning out against the blue-hued background, sensually entwined with another woman only to find herself trapped beneath a sheet of ice when she tries to surface. Rozema also deftly contrasts the cold brick and arches of Camille’s college world with the high-flying freedom and bohemian charm of the circus performers in Petra’s world. Likewise, she shows Camille’s bed in the late afternoon, the dying sun shining through its bed frame to cast prison-like bars across the mattress, while Petra’s bed is presented as an enticing, crimson nest.

When Night Is Falling received lukewarm reviews when it was released. Some critics panned the script’s penchant for clunky dialogue (Petra’s “moonlight” line being the worst offender), and others found the storyline thin and unlikely. However, the film went on to become something of a classic in the LGBT film genre, partly for Rozema’s choice to allow her characters a happy ending. With few exceptions, such as the groundbreaking Desert Hearts (1985), the filmmaking gods were notoriously unkind to women who loved women heading into the 1990s, often banishing those with Sapphic leanings to the grave or the nearest insane asylum. But When Night Is Falling was an early adopter of the idea that lesbians also deserve fulfilling lives.

The film is also noteworthy for addressing the intersection of religion and homosexuality in a serious but gentle manner. Religion is not made out to be a villain in the story, and each believer acts from a place of sincerity. For example, Martin is portrayed as more empathetic than dogmatic, and the retiring chaplain admits the church has been guilty of “homophobic cruelty” and struggles to reach past his outmoded thinking to help Camille deal with her self-described “wordless question.”

“It helps to put names to our feelings,” he tells her. “Naming things gives us power over them.”

“Maybe it gives others power over me, too,” she counters.

Interestingly, Martin tells Camille the opposite when he finds out about Petra, warning her to think before she speaks because “you are what you say you are.”

Ultimately, Camille chooses not to label herself aloud. However, as she literally rides off into the sunset with Petra at the film’s conclusion, I’d like to think she finally knew exactly what she was: authentic and free.

Back in 1995, as I sat in the darkness of that art-house theater, those were the very two things I longed to be.