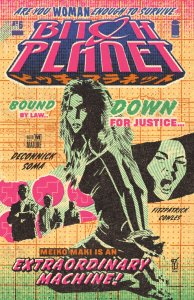 It’s been four months wait since we last got a Bitch Planet fix. Despite that length of time, issue #6 does not disappoint. In fact, it amplifies the sound and fury of issue #5, offering ironic contrast to the characters of the present narrative by flashing back to the time of their innocence before the Protectorate squashed their dreams of building a better world.  Guest artist Taki Soma brings a delicacy of line to the story, emphasizing that hope is a thing with feathers, but also hollow, fragile bones.

Issue #6 relates Meiko Maki’s backstory and kicks off with a stark content warning for sexual assault. I revisit it here since I will be talking about the events of the issue, including the depicted sexual assault. For those wanting to avoid it altogether, issue #7 will pick up with the main storyline and not reference the assault in the summary. 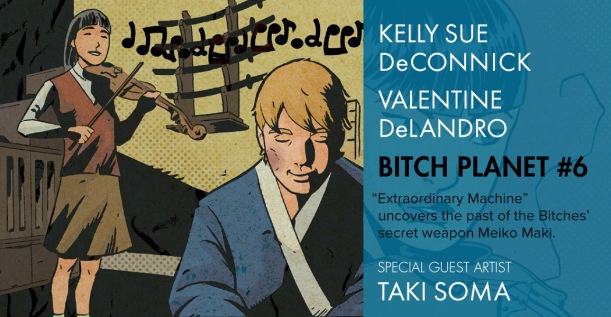 Issue #5 left Meiko Maki–our feisty, buoyant, rebellious Meiko–dead on the floor during the N.C. Megaton team’s scrimmage with the guards. Her father, meanwhile, was putting everything on the line to see her by accepting the job from Father Josephson to build an off-world arena. The tension of knowing he was too late twisted the knife of the loss of a beloved character.

Issue #6 fills in the backstory of how Meiko ended up incarcerated at the A.C.O. Although we might have gotten this story prior to her death to give more context, the reverberations backward are even more emotionally devastating. The dramatic irony of already knowing how all this ends up sings throughout the issue, giving her actions a shade of depressing futility. As Yume states, “The world is so broken. Our only mistake was thinking they wouldn’t be broken too.” 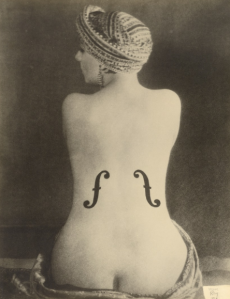 Reverberations are very much the point. The issue sets the story with the statistic that 1 in 6 women report being sexually assaulted while incarcerated and begins with the warned of sexual assault that ultimately lands Meiko at the A.C.O. rather than the Earth-bound women’s prison. But rather than Meiko’s thoughts being of desperate panic to escape or defend herself, she is calmly thinking of a metaphor her mother presented to her of the body being like a violin. Meiko designates the similar body parts of the violin and human body, and artist Taki Soma beautifully illustrates the metaphor with layered pieces of music and Meiko’s body, calling directly to a modernist photograph by Man Ray. But Meiko establishes a dichotomy within the metaphor that explains her distance. The parts of the violin, and thus of the body, that interest her most are the heart and soul. Meiko’s indefatigability is due to her separation of spirit and body. Her body may be at others’ mercy, but her heart and soul remain her own. Despite repression, her spirit still sings.

One of the biggest reverberations of the issue is the contrast between the current Yume and the Yume of Meiko’s childhood. Issue #5 presented a Yume who did not want to challenge the system, did not want to risk vulnerability. She yelled at Makoto when he attempted to tell her of the job, calling him selfish, throwing all her manipulative power behind getting him to change his mind. But the Yume of Meiko’s youth is subversive and, when angered, fierce in the face of authority. She and Makoto enact secret non-compliance. She teaches violin lessons to a classroom of girls, except the music is merely a means to an end. When the door is shut and locked, she teaches calculus instead. In the past, she believed she could enact change to create a better world for her girls and all girls. That hope is killed through systemic abuse of power. Now she fights to hang on to what she’s got, to not let anyone else be taken from her. Meiko’s incarceration, as we see in this issue, stemmed from an act to keep her father from being taken away. Yume now wants to make sure Meiko’s sacrifice continues to be of value, even as all other acts of rebellion are cast in futility.

Makoto is likewise full of hope and happiness inside the little pocket of resistance he and Yume have made. He winks at the girls about doing “their work”–calculus, not violin practice. Though he has the ability to read Meiko’s text messages, he chooses not to, instead trusting that she’ll relay anything he needs to know. As we already knew, Makoto allows Meiko to work on engineering projects for his firm, specifically a Protectorate ship. At this young age, Meiko doesn’t understand how building the ship is part of her parents’ fight against the Protectorate. When she notices a fatal flaw in the design, Makoto does not explain the sabotage deliberately designed into the ship, instead ordering her to trust him. It is a rare, shocking moment of Makoto flexing his fatherly power. As an adult, Meiko realizes this is a feature, not a bug, hoping to exploit the flaw during the Megaton bout to serve a massive blow to the Fathers.

The flaw in the ship’s design is discovered by a Japanophile production manager for the Protectorate. He shares an exaggerated version of the same shallow understanding of Japanese culture shown by Josephson in issue #5. Pursuing his exotic fantasies, he attempts to leverage this “mistake” against Makoto to gain marriage to one of the Maki girls. Makoto refuses to cow to the threat, willing to take the blame himself. However, Meiko, having overheard the indecent proposal, shows similar loyalty and dedication to her family by orchestrating an opportunity to be alone with Braxton under the guise of giving herself to him for sex and marriage. She plays him like a violin and slits his throat with one of her strings.

The crime sings. We knew she was in for murder, but the noble motivations–to protect her sister and father, to fight the Protectorate–reverberate with us. We love and mourn her all the more.

The violin is a delicate instrument with powerful sound. It can jig or mourn. Taki Soma’s art mirrors the violin. Her line work has a delicate flow, a slight wispiness reminiscent of bird’s wings and bow strings. The coloring of the issue is grounded in brown, giving a sepia-toned memory of a family’s natural relationships of love and guidance rather than the false roles of societal compliance.

The backmatter–Bitchfest–continues to be fantastic. The essay, written by Olin School of Engineering associate professor Debbie Chachra, discusses the exponentially damaging effects of gender schema in STEM careers. As always, it is thoughtful, insightful, and inspiring. The final page, a parody of the pamphlets given to young girls upon their first period with an introductory pack of pads and tampons, evokes both laughter, memory, and keen discomfort. Puberty is often the demarcation of womanhood’s societal shackles. The power here, and of all of Bitch Planet, is that it captures the world we have with HDR imaging.