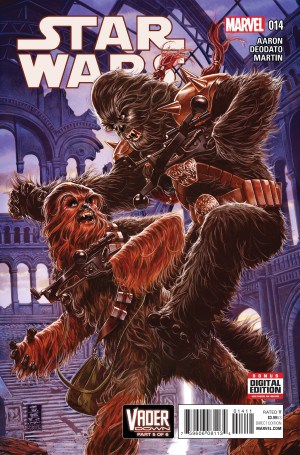 In Darth Vader #14, another joins the “Vader Down” mix as the Imperial Commander Karbin, who resembles the not so sexy love child of General Grievous and Admiral Ackbar, touches down on Vrogas Vas to get Luke Skywalker for himself after Vader eliminates the Rebels himself. It’s a masterstroke of both strategy and plotting from Kieron Gillen and Jason Aaron and adds a much needed element of unpredictablity to the crossover. Along with the epic clash of lightsabers between Vader and Karbin, there is Chewbacca’s (and kind of Han Solo’s) fight against the Wookiee bounty hunter Krrsantan and Luke getting ambushed by the lethal combination of Karbin’s stormtroopers and Vader’s lethal henchdroids, Triple Zero and BT. Definitely lots of plates to spin, and each plot ends on an Empire Strikes Back-worth down ending plus one hell of a cliffhanger from Aaron and artist Mike Deodato.

I am still not the biggest fan of Mike Deodato’s art, which brings uncanny detail to everything from Karbin’s cyborg parts to Wookiee fur, but suffers from being too static. He can craft a poster worthy of Leia standing up to Darth Vader even as she’s on the brink of execution, but the fight between Chewie and Krrsantan lacks ferocity. It starts out well with some vicious headbutts jarring the page, but then R2D2 has to give Chewbacca a shot to neutralize the poison that he was shot with, and the choreography suffers. For some reason, his lightsaber duels are more striking than blaster battles or Wookiee grappling. This is probably because Deodato makes each cut and slice matter as 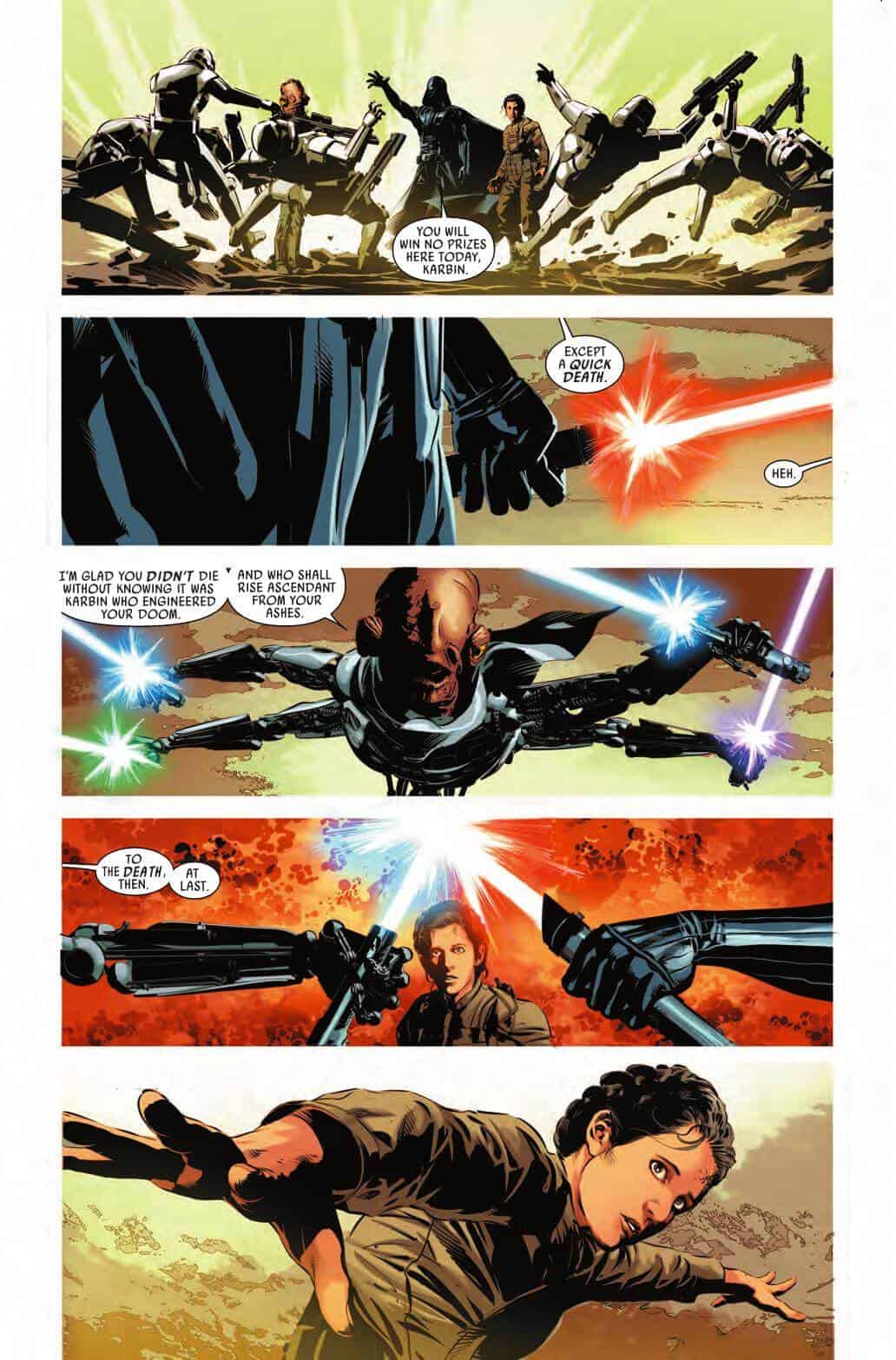 Vader channels Obi Wan Kenobi vs. Grievous in Revenge of the Sith by taunting his reliance on multiple sabers, and when Karbin gets the jump on Vader, whose mind is assailed by Jedi voices from his past. Frank Martin’s colors also help as he emphasizes the energy and feedback from the blades hitting metal or each other. There is also the bright colors for the Jedi lightsabers as Vader shows his mastery over the Force by letting these powerful weapons fly around like a child’s toy.

Aaron finally cashes in on the fact that Vrogas Vas isn’t some random desert planet, but home of a Jedi temple and show the effect it has on both Luke and Vader. Luke is confronted with his inexperience as he is gunned down by the stormtroopers while Vader (called “Anakin” by the voices) faces the evil person he has become and is hit on the back by Karbin. Usually, the Force is a great ally to Luke and Vader, but it betrays them in this case as the issue concludes with a kind of down note montage. Darth Vader and son are not in the happiest place to say the least.