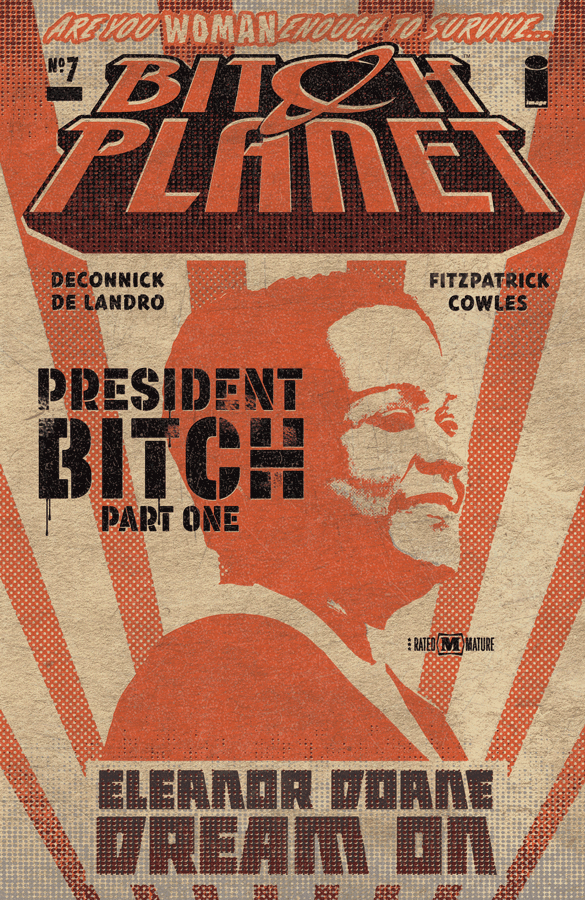 DeConnick and De Landro blow the doors off the second arc with stark ironies, nauseating apathies, and contrasting raw emotions. Stakes get higher and allegiances get muddied as the lesson once again rears its ugly head: all bodies serve the Father–male and female, guard and prisoner, black and white. And bodies are disposable.

For all of the language of the Protectorate as a father, Father Josephson is cold to the plight of fathers in the issue. The opening page depicts institutionalized murder of three black children taking a shortcut across Megaton Corporation’s lawn and thus setting off a trespassing alarm. The guard on duty casually orders their “neutralization” in a barely exaggerated fictionalization of the Tamir Rice and Michael Brown killings. Megaton Corp, despite its “personhood” under the law, has no concern for these children or their families. Their fathers will not get answers nor justice. And Father Josephson, the government-labelled father of the people, has no nurture in his nature. Entirely unaware of the cause of the incoming ambulances outside his window, he stresses to Solanza that he needs Maki to finish the arena in six weeks. Maki’s feelings regarding his daughter’s death are an inconvenience to be dealt with after that. Even Roberto Solanza, manager of Bitch Planet itself, has qualms about keeping the news from Makoto. But Father Josephson throws around the name of the Dollar Almighty and silences Solanza. 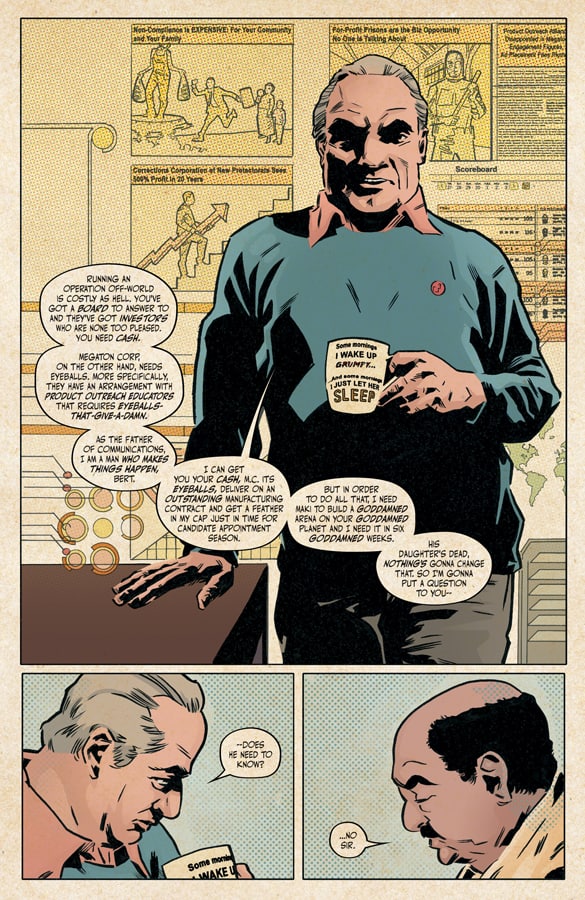 Everyone is a body for the Protectorate’s exploitation. As Makoto Maki’s construction staff arrives at the A.C.O., they are familiarly paraded in naked after their space travel, emphasizing their bodies stripped of societal identity. The two operators snicker at their cold-shriveled manhood. Their bodies do not impress the male gaze. But unlike the barked orders the female prisoners got in issue 1, the men are kindly offered robes and tea. They are met by a hologram dressed in a sexy-business woman costume who has no name except Maki’s Aide. Her priority is to get Makoto working and keep him from talking to the wardens and learning of Meiko’s death before he has completed the arena. When he asks her point-blank to help him find an inmate, her eyes ellipsis out in the hologram version of asking a non-sensical question of a NPC in a video game. The NC’s are likewise being pressed into forced labor as bodies to complete the arena.

Now also just another disposable body, Whitney is being thrown under the bus for the “mishandling” of the Megaton scrimmage that led to Meiko’s death–she’s the scapegoat to appease the board of investors. The scene of her interrogation, a variation of the confession module run on Kamau, introduces a new special operative–Christine. Their names suggest intersectional hierarchies within society. Whitney is just one letter from being “whitey” while Christine is the feminine variation of Christopher which is a secularized version of Christ. The names point to two hegemonic statuses: white and Christian. It’s a subtle nod to privilege in practice. Race. Gender. Sexuality. Class. Religion. They interact to carry levels of power and privilege, stacking or negating. DeConnick makes this clear in the backmatter by defining kyriarchy in the new column called “Lipglossary” to explore key feminist terms. 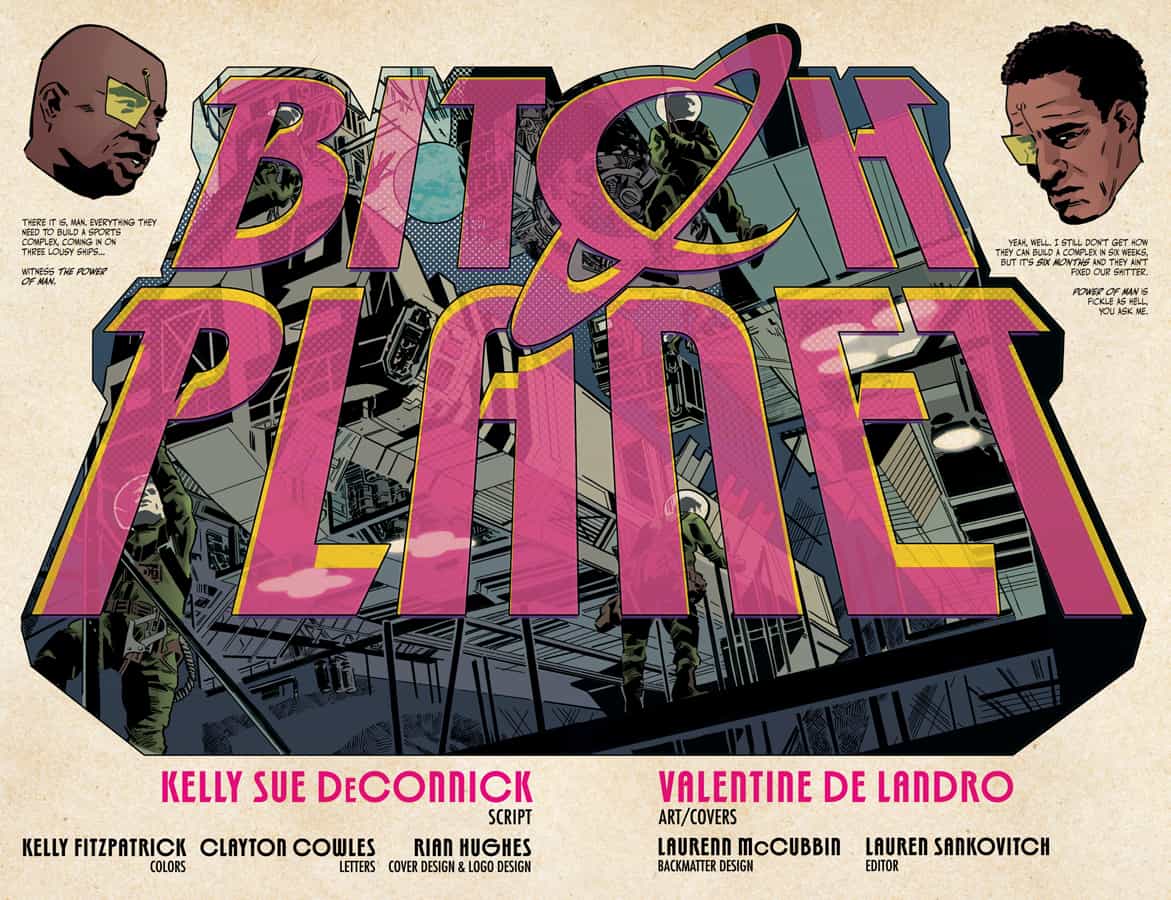 Whitney’s interaction with Christine shows their antagonism, especially in the way Christine lords the power shift over Whitney. When Whitney gets too verbally combative, Christine flexes her power with violence. Exemplifying horizontal hostility, these two white women with the same job ought to sympathize with each other, recognize the inequities the one now faces at the hands of the Protectorate, and ally to overcome. Instead, they wheedle and attack each other, because that’s who’s available to take it. Whitney is given no opportunity to speak to a warden, and Christine seems bitter from a long suffering second place status under Whitney. Christine ends the “confession” by unleashing a simulated rain storm on Whitney. This suggests a possible major character shift in the visual symbolism of a cleansing or baptism, perhaps indicating Whitney will switch sides and become an ally to Kam. But it also transitions to the most emotionally affecting scene in the issue.

Wanting to be even less than a body, Penny is sitting alone on the floor underneath a running shower head. The water hides or symbolizes her tears of sadness and guilt over Meiko’s death. Kamau joins her, offering a sympathetic ear. Penny tells her she wants to run down the drain and not be. When Kam asks if she can come too, Penny tells Kam she won’t fit, she’s too big. It’s an allusion to Chief Bromden’s inverted perception of size in One Flew Over the Cuckoo’s Nest. Kam repeatedly tells Penny it’s not her fault but also relates to the guilt: “We’re strong, right? You and me. We spend our whole lives being strong, and then…one day you realize strong ain’t strong enough.” Penny’s been our hero for her staunch belief that she is worthy as she is. To see her laid low by her guilt, vulnerable and defeated, is heart-rending. Kam’s sympathies heighten the emotional effect while also implying that her rescue mission for her sister stems from similar motivations–she wasn’t strong enough to save her, and now she’s trying to make it right. De Landro gives panels emotional power through expressive close-ups on faces and hands and showing the vulnerability in their naked bodies.

The issue holds multiple incisive critiques of our society, but the most powerful for me is the opening page. The “Corporate Personhood Act” cited by the security AI gives Citizens United a Stand Your Ground power. Megaton Corp. is able to murder children for a minor infraction with impunity. Additional satire comes in the form of screens behind Father Josephson as he discusses corporate needs with Solanza, most graphically in a business man holding the up-pointing arrow of rising profits as though it were his erect penis. And the back page advertisement for “Misandry Cosmetics” is full of brilliance like this gem: “Male Tear Moisturizer: Keep your skin soft and supple with this non-comedogenic combination of baby foreskins and the tears of a thousand men relegated to the Friend Zone.”

Combining these elements, the first issue of the “President Bitch” arc hits all the right emotional notes, twists the plot, and continues its scathing critique of societal inequities.