A screenshot originating from the reddit subforum /r/creepygaming fired a frenzy among gamers that the kind of disturbing easter egg only thought true of an online urban legend had finally been discovered in a nostalgic, child-friendly racer for the N64.

Although the mostly vibrant, brightly-colored California Speed contained a number of humorous billboards and the kind of in-house advertising expected of a Midway arcade title, this particularly easy-to-miss billboard appeared especially dark and was presumably absolutely disturbing to the unfortunate, unassuming player.

The billboard however only reveals itself when actually sought out, visible by slowing the vehicle down entirely and slowly letting the car drift along the edge of the track until the message fully comes into view. Although its unknown if any children ever actually managed to find this image for themselves, the older audience that uncovered it years later found the message to be the ultimate fuel for endless nightmares and late-night gamer conspiracy theories. The message is as follows: 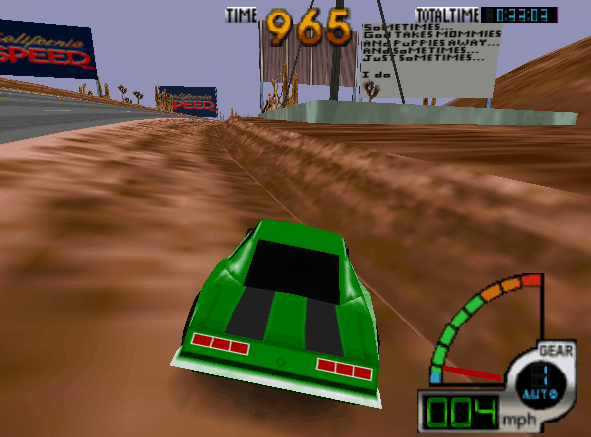 The easter egg was eventually confirmed by YouTubers like The Easter Egg Hunter and was even featured in articles on Cracked for its noted immense creepiness. Was this a reference to something? Was it the work of a disgruntled employee? After months of speculation and aimless research, no information on this notorious hidden secret had been uncovered and the egg continued to mystify and confuse players – until now.

After reaching out to every textural artist listed in the game credits, a series of back and forth correspondences led me down a road of disappointing dead-ends. Finally I had heard a response from Morgan Godat – a game developer with many credits, (including art director of recent Sims releases), who got his start as a textural artist for Midway in helping port the original coin-operated arcade racing title over to the N64.

The final explanation is actually surprisingly funny, as it appears the elusive message in the game was not entirely intentional, as even Morgan wasn’t aware of its inclusion in the title until he watched the videos for himself.

“I’d love to tell you that there was some mystical reason behind this that would get people excited, but it’s fairly mundane. For the majority of that team, California Speed for the N64 was our first project directly out of school. We crunched as hard and as stupid as you can crunch. We made dumb decisions, defended those decisions, hated ourselves for those decisions, and then figured out how to fix what we could and ship a game.”

Morgan went on to explain the cause of the unconventional texture was the product of a swift decision the upper management at Midway demanded of the porting team in the final crunch of development.

“[California Speed] originated as a coin op-game and as such, featured some billboard art that was only relevant to the coin-op world (ads for other midway coin-op games for example). At some point (probably 8pm on a Saturday while we were crunching) the artists were asked to stop what we were working on and make an effort to change all these textures because ‘we are console, not coin-op.’”

“Console” as Morgan explained was the name of the Midway department responsible for making N64 and PS1 games, which included porting their arcade titles like California Speed to the household systems.

“Unfortunately, as we were in a tight situation to even get the most basics of the game stood up on the N64, we didn’t have anything handy or relevant to put on the billboards. So I plugged in a placeholder billboard texture so ****ing stupid there would be no way it could possibly be confused for a real shipping asset.”

Essentially Morgan assumed the absurdity of the texture would have made it obvious to the team that the image was intended as a placeholder texture to be replaced before the title’s final shipment. Nevertheless, the odd billboard texture was not only mistakenly unsubstituted, but also completely forgotten by Morgan himself.

“Connecting the dots from there is pretty straight forward. We crunched super hard, we shipped something unholy, and on we went to bigger and (hopefully) better things. And now, 18 years later, I’m informed via Youtube that my placeholder texture never got replaced.”

Lesson learned: Midway didn’t exactly have the best quality control in its day? Okay, maybe that’s not really a revelation. Regardless, it should be a relief for some theorists to know that this oh-so sinister hidden message has a not-so sinister purpose; simply a ridiculous placeholder texture the team had forgotten to substitute before the game hit shelves. Twas an act of immense terror resulted by a laughable error.