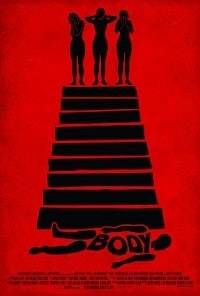 Body is a taught psychological-thriller that doesn’t so much re-invent the ‘one crazy night’ genre so much as skew it for modern sensibilities. There aren’t any scares here, but Dan Berk and Robert Olsen deliver a treatise on self-absorption that is horrifying, nonetheless. It’s rare to find this level of rich subtext in such a modest genre picture. Lively and entertaining, Body is a nice change of pace if you’re looking for something slightly more sinister this holiday season.

It’s Christmas Eve, and Mel (Lauren Molina), Holly (Helen Rogers), and Cali (Alexandra Turshen) are back home from school and bored out of their minds. They’ve tortured their younger brother, titillated old boyfriends, and tormented their dorky parents. Now it’s time for some real fun! Cali has a rich uncle who lives out in the ‘burbs. Since they always go on holiday this time of year, Cali figures it’s a great time to break into their palatial mansion and raid the liquor cabinet. For an instant party, just add booze! 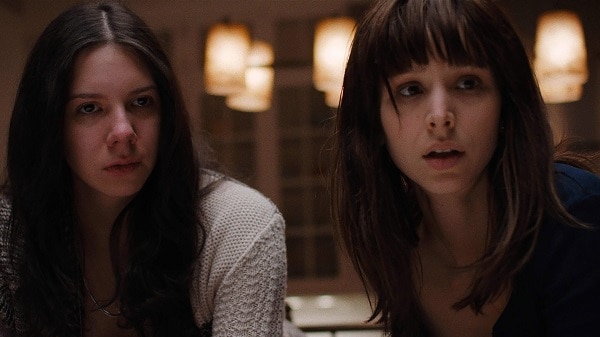 Part of the charm of Body is that you can easily identify with one of the three character types represented by the girls. In “Dungeons and Dragons” parlance, Holly is ‘lawful evil.’ She isn’t afraid to bend the rules as long as there’s a good, defensible reason. Cali, on the other hand, is ‘chaotic evil.’ She’s the little devil on your shoulder pushing you beyond your comfort zone. Mel is solidly ‘neutral,’ pinging in whichever direction is trending at the time. When an unexpected stranger (indie stalwart Larry Fessenden) shows up at the mansion, each girl is challenged to justify the horrible decisions they are about to make.

On the surface, Body seems little more than a shallow examination of bad timing and terrible decisions. As each misfortune stacks upon the last, however, it quickly becomes apparent that we are being tested just as surely as Mel, Holly, and Cali. “What’s the difference?” is Cali’s constant refrain when comparing life and death. Her obliviousness to the value of human life is cleverly offset by her salient arguments. Cali’s is the type of twisted logic that sounds really good when your hand is firmly wedged in the cookie jar. Just how far will these characters go to escape unscathed? How far would you go? 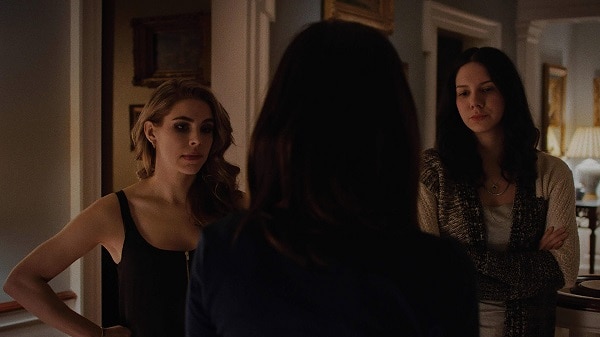 Even at a slim 75 minutes, writer-directors Dan Berk and Robert Olsen seem to lose their way in the film’s middle section. One of Holly’s old boyfriends arrives to introduce a little tension, but the whole sequence feels forced and out of character with the rest of the film. Where Berk and Olsen really find their groove is when they focus on the dynamics between Cali and Holly. With each disastrous, self-centered decision that Cali makes, Holly is pushed closer to her breaking point. The reversals and power-shifts between them are the primary source of tension and fun. Like the hapless Mel, you may find your allegiances shifted in some very uncomfortable directions.

Perhaps no scene better illustrates the terrifying narcissism at the heart of Body than the emergency call that Holly, Cali, and Mel make to the police. The girls have their story all worked out. All they have to do is tell a series of soul-crushing lies and they can go back to their plastic lives of privilege and binge drinking. Before they dial 911, each girl works herself into a frenzied state; panting, sobbing, and hyperventilating, almost on command. It’s one of the creepiest, most disconcerting scenes from any film in 2015, and is executed with masterful precision. We’re left to wonder which is more horrifying; their fabricated display of victimization, or the fact they might actually believe they are victims.

The central trio of actors is strong, with Alexandra Turshen making a particularly charming psychopath. The real star of the show, however, is Helen Rogers, who finally appears ready to break out. Rogers’ performance sneaks up on you, as her character increasingly imposes her will on the decision-making. By the end, you aren’t really sure whether to admire Holly or avoid her at all costs.

Despite its slightness, Body boasts a rich subtext of privilege and moral plasticity. It’s a powerful statement not only on the dangers of disrespecting human life, but the ease with which our society makes such judgements. Plus, it’s a damn good time watching these characters descend deeper and deeper into oblivion. Body is a twisty ride with some nifty surprises and plenty of relevant social commentary.