How a show with such a clearly drawn main character fails so greatly in focusing on a specific theme or story every week is truly baffling. It’s a telling sign about how badly Supergirl needs to work on its focus that an episode objectively about how Kara deals with not having powers on a day when National City goes through a massive crisis barely deals with that subject at all. “Human For A Day” is instead content to look towards a plethora of other action that barely has to do with Kara, if at all. “Hostile Takeover” too is more focused on the titular hero for only a fraction of the time, making the B-plot more of a co-A-plot for no real reason. What’s the fun in bringing back Astra if the episode is only going to commit more than half the time to a ripped-from-the-headlines Sony hack storyline? There is a way to balance a big bad enacting her master plan while she tries to once again convince the hero to come to her side with a more personal story for one of the tertiary players, and this isn’t it. Every time Astra’s presence starts gaining momentum it screeches to a halt because the action (“action”) switches to Wynn and Jimmy trying to keep Cat in her position as the head of Catco. It’s a crazy choice for what is effectively the last chance for the audience to fall in love with the show before it goes on hiatus for the holidays. What’s more, all of these mistakes are made before one of the most nonsensical cliffhangers in recent memory.

The specific ways that Supergirl falls short of its potentially are so frustrating because the bright spots are there, clear, and so much easier to emphasize than the show is making it seems. The way it ties together parallel stories is clutzy and hackneyed, drawing the viewers eyes to the seams instead of playing tricks with storytelling and the puzzle pieces of the season. “Human For A Day”‘s reveal that Hank Henshaw is not in fact Hank Henshaw is as effecting an emotional moment that the show had accomplished up to that point. By shoehorning it into an episode where it is forced to mirror Kara’s lack of powers instead of standing alone as a strong reveal it is comparatively diminished. The same goes in “Hostile Takeover” when Kara’s anger at her mother’s familial and political decisions is also touched on with Cat’s storyline. Cat and Kara have had so many heart-t0-hearts at this point without ever achieving any level of relationship building. It being cute that Cat calls Kara “Kiera” over and over again stopped being a thing about 5 heartfelt conversations in the past. At this point it’s a schtick that is only in place so Cat has some sort of running gag as a boss figure. It makes her seem less like an HBIC than someone who is so spacey and callous as to not even remember her own assistant’s name. By the time she figures out that Kara is in fact Supergirl, which is ridiculous in and of itself at this late stage, it borderline doesn’t make sense because Cat has been portrayed as someone who only cares about Supergirl’s page views not her actual worth as a hero or a protector of the city. It’s an easy way to advance their relationship without actually making sense for the character. Plus, the trope where glasses are a sufficient way to hide a secret identity is so far beyond being reasonable it has looped around into straight insanity. Cat Graham runs a tabloid and a newspaper – seeing through people attempting to be incognito is part of her job description. 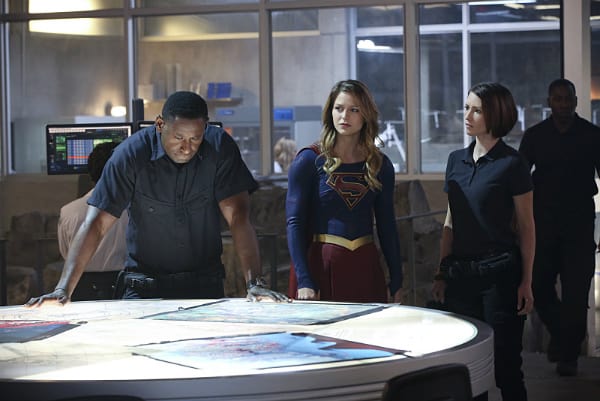 The character building here is not quite as dire as the story growth, but still not where it could be as a whole. As if it is bad enough that half the midseason finale is spent on the hack of corporate emails, the way the team cracks the solution to the problem directly betrays the facts of the show. Why couldn’t Kara just speed in and out of Armstrong’s office to plant the bug? Why didn’t they prepare Jimmy more fully for where to put the attachment when he got there? Is the show’s budget so tight that Jenna Dewan really couldn’t show up until the last minute to put everything together? There are a hundred additional questions exactly like this due to ways the show specifically betrays character knowledge or skills in order to get everybody in the position they need. The DEO has been hunting super villains and aliens for decades, yet doesn’t see right through Astra’s plan to distract them while her team attacks Lord Technologies? It is frustrations on top of frustrations as far as the eye can see. As an alien with some humanity, why isn’t Kara more upset that her battle with Astra destroys buildings on half a city block? Apparently it doesn’t matter, as long as Astra gets to that DEO cell so she and her niece can have a conversation wherein everybody spills all the secrets in their back pocket. There are ways to facilitate all these story beats in a way that seems legitimate, but the show is either too lazy or too willing to overstuff every episode that those ways are completely ignored.

Not every story beat is a travesty though, which does hold some promise for the back half of season one. Although the flying scenes and fights are still far below par when it comes to television special effects, the fact that there are major fights in the episode at all is a big step forward. Astra has been ridiculously MIA as the supposed big bad of the season, and Laura Benanti shines in her return as both Astra and the holographic Alura. Melissa Benoist’s performance as Kara realizes that her mother possibly hid grievous secrets from her about their family and their home planet, and that her objectively awful aunt might have the smallest of good points about the entire thing, is nothing less than marvelous and heart wrenching to watch and easily her best scene of the season. Astra’s plan finally falling into place is also long overdue, and is tense even if it involves Maxwell Lord showing up with anti-alien weapons only to be knocked out less than a minute later. The aliens could have attacked anywhere, but the show’s insistence on making Maxwell Lord a thing right now forced them to go to his lab. Stop trying to make Lord a thing, Supergirl! Fetch is never going to happen! Setting aside the inexplicable decision to end the episode with Kara in mid-fight with her aunt’s lieutenant (and not even Astra herself) the episode leaves the show in a good place moving forward. It’s possible that it will return in a month or so the exact same flawed, uneven, and frustrating show it is right now. It’s also completely reasonable to hope that a small hiatus will help the writers find a way to even out the major arcs of the season, properly highlight the supporting cast without falling so desperately into tropes and awful subplots, and give Melissa Benoist an equal amount of earnest and emotional work to pull off. It’s a slim chance, but if there’s anybody who embodies hope and wishing the best of a bad situation it’s none other than Supergirl herself.