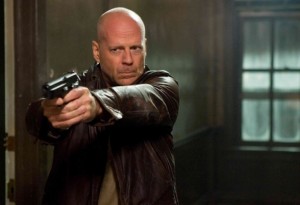 Bruce Willis, while promoting RED, expressed his intention to continue with the Die Hard series, saying, “I want to do Die Hard 5, then one final Die Hard movie, Die Hard 6, before finally hanging that white vest up for good. At the moment, I can run and I can fight on screen. But there will come a time when I no longer want to do that. That’s when I’ll step away from the Die Hard films.”

When talk of Die Hard 5 began in May, the word was that Skip Woods (Hitman, The A-Team) would be writing the script, but that’s all that’s known on the subject so far.

In the interview with Showbiz Spy, Willis explained that it would be very easy for the producers to simply replace him or continue the franchise in another direction, with another character, which is why he wants to continue with the Die Hard films while he’s still able.