“What’s wrong with you?” is the first thing main protagonist Henry is asked by his boss. In an ideal working environment this isn’t something you want to be asked, especially just after you’ve started your new job. This working environment however is anything but ideal, or even ordinary. Henry, due to a tragic series of events in his own life has volunteered as a fire lookout, tasked with spending his summer holed up in a tower watching for fires or anything that could reciprocate one. Sounds about as dull and boring a job as watching walls – not even painted walls, just walls. This is however a video game, a piece of entertainment and we’ve been told many times that as fun as sitting in a tower for three months is, it doesn’t make for the most exhilarating experience to control – though I’m still not convinced. In this line of thinking, Henry doesn’t spend too much time in his tower, at every opportunity his boss – Delilah – has him fulfilling some task or another. Make no mistake this isn’t a game about screaming in your face to ‘notice it’ or about giving players a fun set of gameplay mechanics. It’s methodical, quiet and often lonely, asking nothing more from you than to listen and most importantly to care.

The game makes it so easy to care, if not only for the witty and warm dialogue but also its ability to construct emotionally effecting snap shots of life through the lens of mere words. The game’s opening is startling and in many ways devoid from the rest of Firewatch, it gives you a look into the soul of Henry, it instantly makes him a flawed character and has no qualms in showing real life problems that people deal with, every day. It’s this that makes him and every character in Firewatch endearing, they feel real and you might find yourself seeing a lot of your own anxieties/ fears reflected on them. To talk about specific plot events would not only ruin the surprise but in many ways would spoil a lot of what the games intentions are. Tonally the game edges the line between humorous and poignant, it’s easy to think they would be at odds with each other but the opposite is true. Henry and Delilah almost instantly hit it off and click, their back and forth quips provide a relationship that allows them to be cynical to each other, to take jabs and even to be coldly honest. They only have each other to rely on, their interactions solely taking place over two way radios (it is the 80s after all, no Twitter to keep up to date on what they each had for breakfast). Its purposefully limiting and proposes a lot of room for mistrust and doubt on the player’s side, In fact Firewatch actively encourages theories, instigating them onto the players psyche. The plot later ramps up but when the end comes, it’s a reminder that no matter how exciting we want life to be, no matter how hard we try to run and hide from our problems, someday we will have to face the fact life isn’t that simple, reality is always waiting. But what we can always take away is the relationships and moments we experienced along the way, they make life exciting in a way that our wild imagination never could. 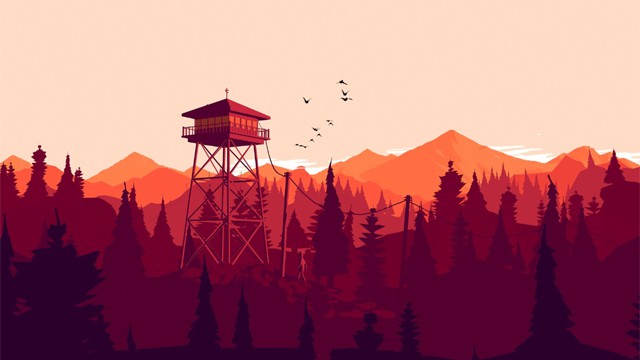 For a game to live or die on its dialogue is a risk most games will run from like a speeding train in the middle of a math problem. Fortunately the dialogue in Firewatch is its biggest strength and even when the humour seems a little contrived and forced – which it sometimes can – it’s elevated by naturalistic voice acting and performances that make the characters come to life. In one example early on Henry can point out a steep drop that he must descend, Delilah offers him to name the ‘landmark’. When the descent obviously doesn’t work out completely Henry remarks on how whatever you chose to name the landmark ‘got him’ before it’s permanently engraved as that on your map, like a constant reminder of your own baffoonery. The choices the game serves up are almost always about what you say to Delilah, how you choose to attach yourself to her. The consequences aren’t vast and the game isn’t about to remind you when you make a important choice unlike a Telltale series. However it does affect how people react to you, just like in real life; conversations are a balancing act that can so easily negatively or positively impact a person’s emotional state, in this vain you can perpetually act in a way that pushes Delilah away, you can even upset her to a point that she will refuse to talk to you. Elsewhere the game offers up a basket of optional conversations and interactions that many will miss or never know existed, it’s a fitting reward then that the game’s biggest strength is the result of thorough exploration.  Most of the side events don’t impact the story in any meaningful way but they are likely to help you understand some of the small stories hidden within the beauty of the Shoshone.

The visual design of Firewatch, is striking and entices with its deep, vibrant colours and lush scenery. It’s a setting that often leaves you strangely nostalgic and relaxed, just being there and exploring is something you never feel irate about, even on the few occasions the game asks you to backtrack. Unlike a lot of similar games, the world never feels static, the trees blow in the high winds, the sky turns purple as the sun sets. The game appropriately gives you a disposable camera with a limited number of shots to capture the most important moments the game offers you. Details such as a series of in game books created by the visual designer Olly Moss (recently did the eBook covers for Harry Potter) don’t add any plot but they add tremendously to the sense of place. Though the setting is open in design, don’t expect a huge open world. In structure the game is linear, always putting you on a path to a new objective and gating off areas until you have the right tool to access them. Equally the gameplay never straddles to tax your thumbs or your brain, there are no reflex challenges and puzzles consist of following instructions and finding items. The audio design is equally commendable, music kicks in at specific points, never overbearing but instead choosing to enhance the overall emotional mood of Henry. 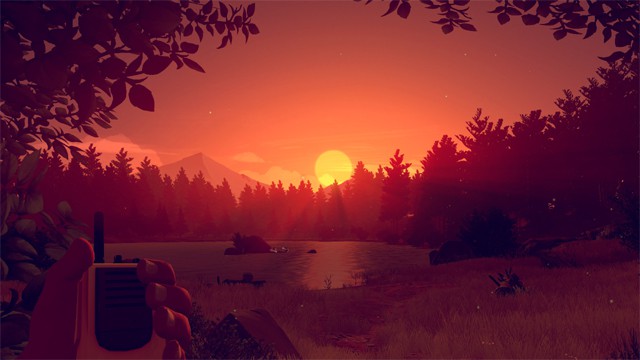 Several caveats obstruct the game reaching the heights it could, taking away from the overall enjoyment from minute to minute. Almost all of these problems could be resolved through extra time polishing. Visual bugs and glitches plagued all of my sessions with Firewatch, textures appeared where they shouldn’t be, Henry got stuck in place several times and the game needed to be restarted numerously. There is an instance where the map that can be pulled up at any point in the game is just a black polygon and unreadable. They impede and subtract from what is in every other way a experience worthy of your time. Framerate upon release was inconsistently choppy, though the Developers at Campo Santo have promised to fix a lot of these issues, it’s still disheartening.

“Walking simulator” is an awful term that has recently gained traction within the gaming industry, almost always used in a derogatory fashion, undoubtedly this will also be levied at Firewatch. Firewatch, and in turn Campo Santo, revel in telling a story first and above all else providing something that only intends to make you feel something, if that makes it a walking simulator, they don’t care. In the end Firewatch is about two people, running away from problems in their life and inevitably how life never offers any easy answers, you just go where it takes you. When it comes down to it, “what is wrong with you?” is a question we ask ourselves and the vague answers we can conjure is what makes us human.