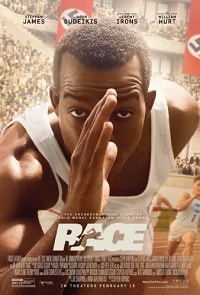 Despite an advertising campaign that screams, “Made for TV,” Race is a worthwhile addition to the multiplex. It’s hard to fathom this is the first biographical drama about Jesse Owens, but director Stephen Hopkins does a respectable job bringing the American Olympic hero to life. Hopkins avoids many of the typical melodramatic pitfalls, focusing, instead, on capturing the emotional, social, and political mood of that tumultuous time. It’s an unapologetic chest-beater that easily sprints ahead of other lumbering family-friendly films.

It’s safe to say that Jesse Owens (Stephan James) was a generational-type athlete. Not only did he win 4 Gold Medals at the 1936 Olympiad in Berlin, the astonishing records he set in track and field lasted 25 years. It’s hard to imagine what he might have accomplished in the modern era of sports science. More amazing, he accomplished these super-human feats at a time when Nazi Germany was gearing up for war and America was still paralyzed by racism. To put things in perspective, Adolph Hitler reportedly congratulated Owens on his accomplishments; the American President did not.

Director Stephen Hopkins keeps this turmoil firmly in the foreground of Race. Tracking Owens from his formative years in Cleveland to his triumph in Berlin, Hopkins reveals an athlete who never had the luxury of surprising anyone. He’s identified as a ‘chosen one’ early in life, and is openly told that anything less than a Gold Medal will constitute failure. Not just failure as an athlete, but as an ambassador for both his country and his race. It’s the sort of pressure that few can shoulder, and Hopkins does a good job making those expectations on Owens palpable and real. 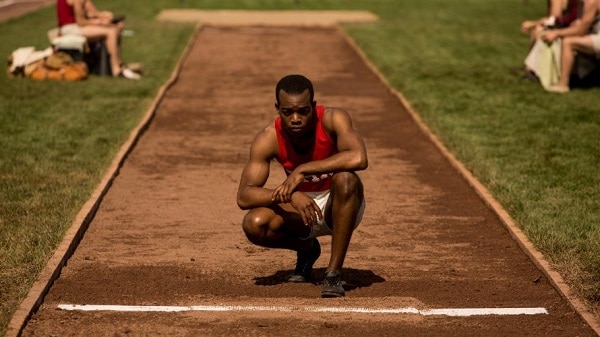 Of course, the interpersonal threads of Owens’ story are much less compelling than the social and political intrigue swirling around him. The relationship with his hometown sweetheart, Ruth (Shanice Banton), is about as by-the-numbers as it gets, with Owens struggling to provide the emotional and financial support that his young family needs. Still, there isn’t any painful melodrama here, as Ruth remains in the background for most of the film.

Slightly more problematic is the relationship between Owens and his Ohio State track coach, Larry Snyder (Jason Sudeikis). Sudeikis and James never generate any professional or personal chemistry, despite screenwriters Joe Shrapnel and Anna Waterhouse pouring tons of creative energy into the pivotal relationship. It doesn’t undermine the movie, exactly, but it prevents the drama from escalating beyond timely pep talks and thoughtful gazes. 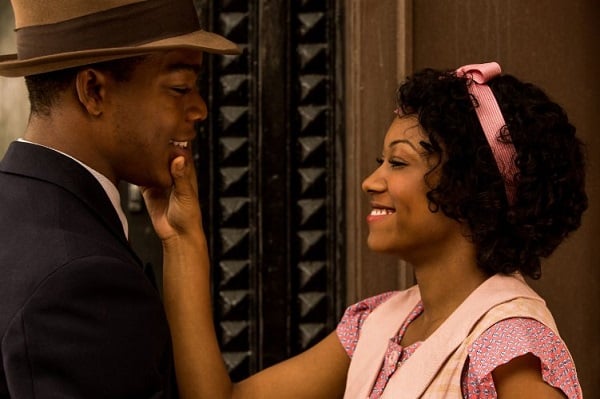 More convincing and affective is the relationship between Owens and his primary German rival, Carl ‘Luz’ Long (David Kross). Luz understands the evil that is coming; selflessly embracing the competitive spirit of the Olympiad in defiance of his Führer. It’s a decision that likely cost Luz his life, as he was cruelly dispatched to the front lines once WWII broke out. Had he rebuffed Owens instead of hailing him—even insisting Owens make his final broad jump attempt when the outcome was already decided—Luz would most certainly have enjoyed a cushier fate. This is the type of dramatic subtext that most biographical films lack, making the decision to focus on the formulaic relationship between Owens and Snyder a puzzling (and disappointing) one.

What Hopkins gets right, however, is the behind-the-scenes political wrangling, both in America and in Berlin. In 1935, the Amateur Athletic Union (AAU) was a whisker from boycotting the Berlin games amidst rumors of Nazi aggression against Jews and minorities. Jeremiah Mahoney (William Hurt) presented a compelling case for boycotting the games, while his colleague, Avery Brundage (Jeremy Irons), argued that athletic endeavor outweighed unsubstantiated rumors. Brundage travels to Berlin and meets with the Nazi regime, including the sinister Joseph Goebbels (Barnaby Metschurat) and a driven young director named Leni Riefenstahl (Carice van Houten) who is tasked with recording the Olympiad. Despite witnessing people being displaced from their homes, and driving past signs that read, “No Jews or dogs allowed,” Brundage gets the assurances he needs from Goebbels and sways the AAU in his favor.

Hopkins understands that Owens won the medals through his perseverance and athleticism, but it took the bravery of many individuals, both American and German, to facilitate his triumph. Even Riefenstahl, whose chronicle of the Berlin Olympiad is one of the most compelling and morally-queasy films in the history of cinema, plays an important role in helping to immortalize Owens. While lesser films might have excluded these “dry” details, Hopkins includes them to add depth to a story of immense historical complexity.

Though Race is a modest film on many levels, it strives to be more than just a sports yarn. Many of the clichés, including the constant drone of obnoxious sportscasters, are scaled back in favor of quieter character moments. Indeed, the re-creation of track and field events is refreshingly sparse, making the isolated cases feel all the more poignant. It’s a brave choice for the director, who will disappoint many viewers expecting a ‘racing film.’ More importantly, it’s a celebration of one man’s desire to compete on the biggest stage, and forcing a reluctant world to acknowledge his humanity. Sports are uniquely capable of lending immediacy to the intangible. Race does an admirable job of capturing that immediacy in a satisfying, easy-to-digest way.