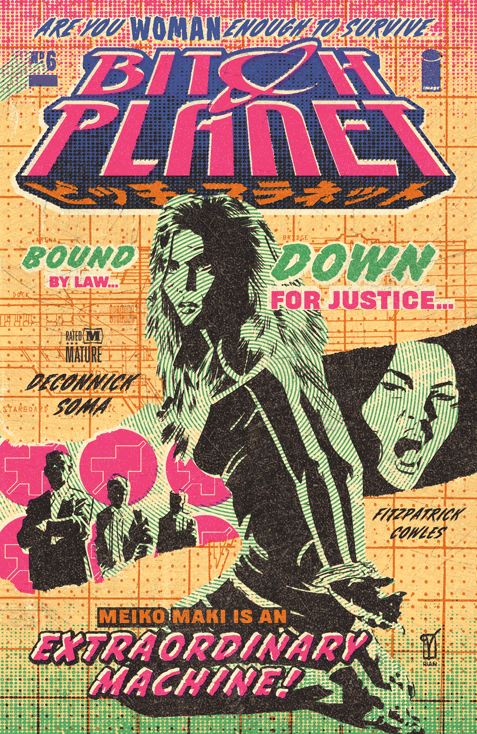 In Cell by Cell, I look deeply into the panels of an issue, appreciating and analyzing the story and artistic composition.

These two pages develop the relationship between Mack and Meiko as he shows her the final blueprints of the spaceship they’ve designed together for the Protectorate. Cell 1 focuses tightly on them looking at the blueprints on the table. Makoto seeks Meiko’s input: “What do you think ?” She thinks it’s amazing. The tight framing surrounds them with only calm, natural colors of brown, blue, and green. It is a moment of great comfort and happiness for them. 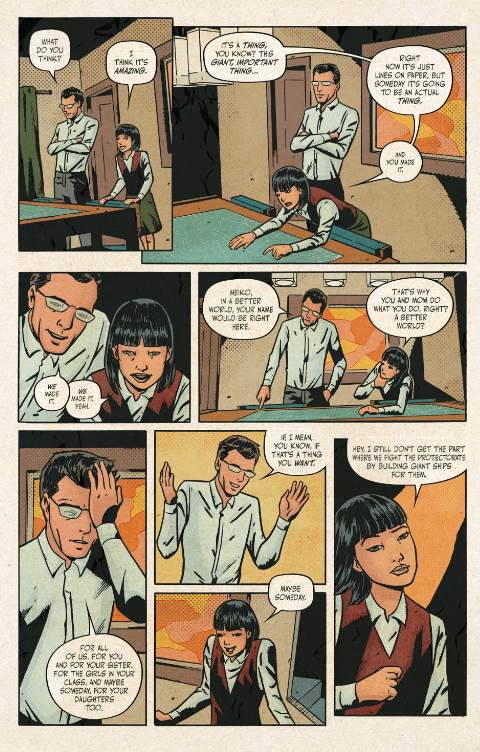 We don’t get to see their working relationship–the plans are already complete–but this gives a strong indication. Unlike the Protectorate’s devaluing of girls and women, Mack actively seeks his daughter’s input on important things. He’s got a little girl consulting on the engineering of a space-worthy luxury getaway. Clearly he trusts her intellect, creativity, and reasoning to have her working alongside him in this way. This is a major step up from co-building a birdhouse. As I mentioned in the last Cell by Cell, this is also the bedrock of trust by which her later actions stem. His trust for her to handle adult work allows her to trust herself to handle adult situations.

But in the adult world, situations are complicated and dangerous. Cell 2 frames them more widely, bringing in that gold-orange painting, introducing the impending hazard. This time, they are both facing away from it, not recognizing the danger in their future. The dialogue bubbles circle around in front of the painting, drawing attention to it before leading to Meiko, telling her father how amazing it is that this will become a thing, and he made it. 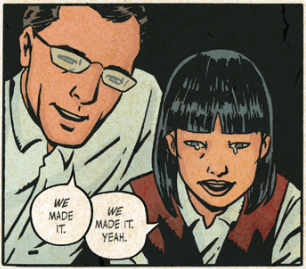 He corrects her in cell 3: “We made it.” She has tears in her eyes as she gratefully amends her statement: “We made it. Yeah.” It’s a touching frame, all about their emotions in the moment. Pride and love. The background is blacked out, showing how it’s just the two of them sharing this. The painting, which should be behind them based on the angle of composition, is absent. The outside world. The complications to come. They don’t matter in this moment of shared accomplishment.

Cell 4 brings that outside world back, both in the painting and the dialogue. Mack points out that in a better world, her name would be on the blueprints too. Meiko clarifies that is the reason he and her mother do the subversive things they do. Tension is added to the frame by placing the “hazard” painting behind them and canting the angle of the composition slightly.

Makoto explains in cell 5 that they do it for everyone: Meiko, Mirai, and their classmates. And for their daughters, maybe. In cell 6 he laughingly amends the bit about daughters, adding, “If that’s a thing you want.” Mack wants to give the girls real choice, and his earnestness is endearing. He doesn’t want to teach them the tools of engineering just to enforce the future role of mother. They can choose that to, when the time comes. Meiko accepts the maybe, telling us a great deal about her openness to non-compliance. All three of these cells are tight frames around the single characters, emphasizing the focus of that one dream: choice. But behind them is that orange and gold painting, again foreshadowing the hazard ahead.

In the final cell of the page, Meiko shifts the topic to how they can be fighting the Protectorate through building their ships.

Makoto hedges in cell 1. He says it’s complicated. The close-up shows his emotional conflict about subverting the Protectorate by working for them and not always knowing which side he’s really serving. The background has been blacked out to keep the focus on his facial expression. He faces right, suggesting his uncertainty is about the future, what will come of these plans. 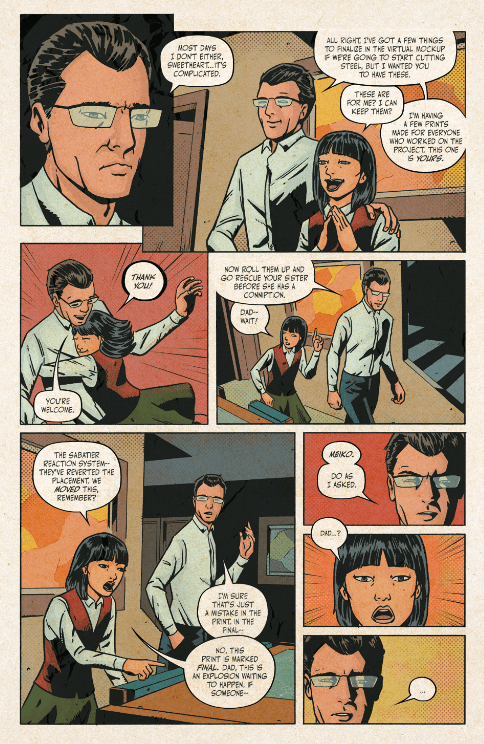 But in cell 2 he faces left, now with his arm around Meiko, and a smile back on his face. He presents the blueprints to Meiko as a gift for her work on the project. The smile and the facing left all indicate the good memories he has of sharing the work with his daughter. No matter the future, these memories will remain. But considering the future that comes, clearly those memories will have different emotions attached to them.

Meiko abounds with gratitude in cell 3, forcefully hugging her dad, exclaiming “Thank you!” The red background with action lines reinforce the feelings of intense familial love. 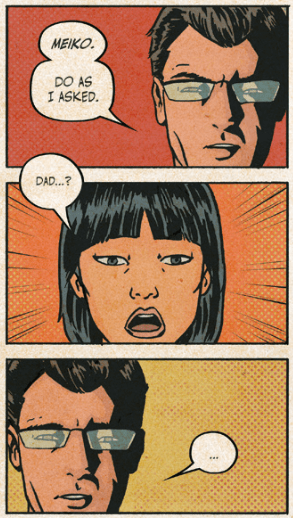 In cell 4, Makoto tells her to roll up the print and rescue her sister from music practice, but Meiko has noticed something in the plans and tells him to wait. She explains in the next panel that a change they had made earlier has been undone, creating a potential explosion. Mack tries to get her to ignore it, saying it’s a mistake in the print, but she’s adamant that the print is marked final.
Makoto uses his patriarchal power for the first time in cell 6: “Meiko, do as I asked.” Cell 7 shows Meiko’s reaction of shock at her father’s pronouncement. In the final cell, Mack is at a loss for words. This isn’t who he wants to be. But he knows more than Meiko. That mistake is intentional. That’s how they fight the Protectorate by building them huge ships. Sabotage. But is it worth it if he must become who he hates to complete the job?

The color use in these last three frames goes from red to orange to yellow. They are the three colors of the painting and again foreshadow the danger coming. The sacrifices made to subvert the Protectorate are close and personal. This becomes even more evident in the coming pages.