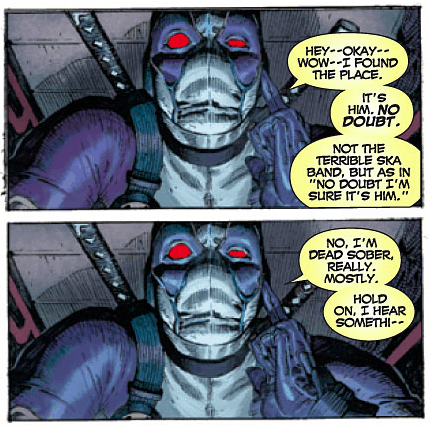 In the pages of Rick Remender’s Uncanny X-Force, most of the members of that assassination team have lost something. Wolverine lost his son. Angel lost his life while Psylocke lost her love. Fantomex lost his independence. And Deadpool? Well, as in almost all things, Deadpool was the oddity in Remender’s story about the moral ambiguity of these heroes. A comic character who seems to exist outside of concepts like id, ego and superego, Deadpool is the odd duck in Remender’s own ode to the Chris Claremont halcyon days of the X-Men franchise. But where the X-Men under Claremont were a team of heroes that accepted the killer Wolverine, Remender’s Uncanny X-Force casts an eye towards some of the darkest creations of the X-Men’s world and struggles to find redemption for them.

Deadpool doesn’t go through the same kind of losses as the other members of X-Force do unless you count the time his head gets chopped off in the magical Otherworld as a loss. On the surface of the story, Remender used Deadpool just to add some laughs to an otherwise dark story. One of Deadpool’s best remarks comes early in the series when Wolverine is being crushed by Apocalypse’s minotaur-like Death and yells, “Get ‘im off.” Deadpool’s answers to that order, “What, like give him a lap dance? Show him a dirty movie? Best friend style massage?” And just like that, Remender has Deadpool completely diffuse the severity of the moment as he’ll do time and time again during the 35 issue series.

For a wildcard character, Deadpool functions extremely well here as a team player. When we first see him in Uncanny X-Force #1, he’s already working on the mission long before any of the other members of X-Force, who are just sitting around their own version of the Batcave (an X-Men themed one no less) and waiting for something to happen. On a team of mercenaries and killers, Deadpool operates like Wolverine did back in the early days of Uncanny X-Men. Remender uses Deadpool opposite of how you think the character should be used. When you hear about Deadpool on a mutant team, it is easy to imagine him as the irritant of the team or the wise-ass who’s always there to chaff the leader’s butt. Think how Wolverine and Cyclops’ relationship started under Chris Claremont.

Yet Remender inserts him into the team dynamic, playing to Deadpool’s outrageous side by giving him a place and situations to be outrageous in. Whether it’s killing one Apocalypse, preventing the ascension of two other possible Apocalypses or travelling to alternate dimensions to (you guessed it) fight aside the Age of Apocalypse X-Men against their own incarnation of Apocalypse, Deadpool gets to be the character who has no stakes in these battles so he’s almost the only one who’s there of his own free will with no obligations to the fight. There’s that Claremontian spin that Remender puts on this team, developing the drama even as he gives each character a reason and a purpose to be on the team.

Deadpool’s oddly compelling dedication to X-Force puts him into two odd roles; he’s the team’s most faithful soldier but he’s also the conscience of the team. In Remender’s ensemble book featuring a bunch of characters who are the best at what they do, Wolverine, Psylocke, and Fantomex are all wrapped up in their own familial and love-life drama. Deadpool doesn’t get the spotlight like the other characters do in Uncanny X-Force but Remender always has him there, speaking as the heart and soul of the team. He’s the first one to verbally express his reticence over killing a child, even if it was a possibility that child was going to grown up to be the destroyer of humanity. During a battle with Apocalypse’s Horsemen in the Blue Area of the Moon, Deadpool protects and sustains Angel quite literally with his own flesh and blood. It’s a move that only a true psycho could make but it is the move of a psycho with a heart. 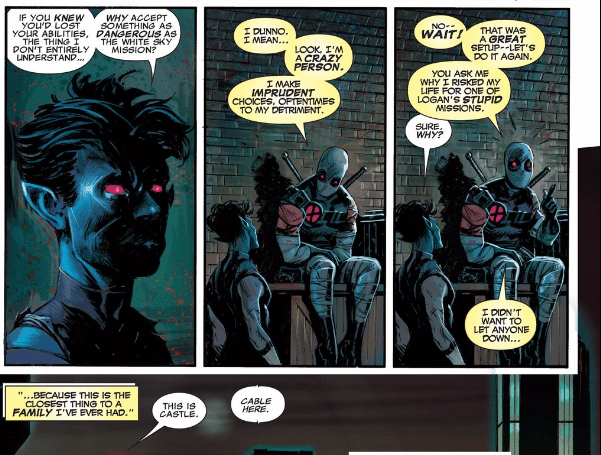 The second time that X-Force is trapped in an alternate dimension, one where their killing methods have become the norm and they are the overseers of justice, the Age of Apocalypse Nightcrawler (now a part of the team) asks Deadpool why he accepts all of these dangerous missions. “Look, I’m a crazy person. I make impudent choices, oftentimes to my detriment,” he answers. It’s a surprising moment of clarity for Deadpool before realizing the moment he just passed up on. “That’s was a great setup– Let’s do it again,” he tells Nightcrawler before answering, “I didn’t want to let anyone down… because this is the closest thing to a family I’ve ever had.” There’s the clarity and there’s the honesty that Remender gives to Deadpool which isn’t on display a lot in other Deadpool stories.

Chris Claremont’s influence on Remender’s Uncanny X-Force shows through once again in Deadpool’s dialogue. While Remender uses Deadpool’s humor to say here what the character really thinks and feels rather than hiding behind a constructed wise-cracking veneer, Remender applies a traditional X-Men approach to the team to an extremely violent and morally-struggling story. This isn’t the story of heroes as much as it’s a team of killers who try to tell themselves that they’re on the side of the angels. It’s what the character of Wolverine has struggled with since his earliest days but here it’s applied to the concept of the whole team. Within that dynamic, Deadpool is the out-of-place puzzle piece but that gives him a unique perspective on what’s actually happening in the story. 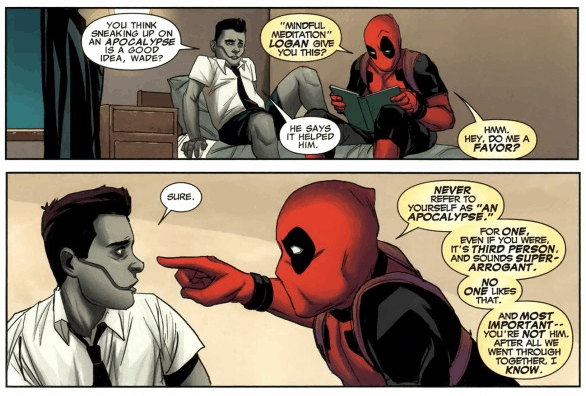 It also gives Remender room to tell a Deadpool story over the course of the series. There’s no story arc in Uncanny X-Force that you could point to as a Deadpool arc, focusing on his character. And a traditional arc like that wouldn’t work for Deadpool because he’s such a Wile E. Coyote-type character, more trickster than a hero. But by letting the character work in the background of the whole series, Remender adds to the Deadpool story by letting Angel, Wolverine, Fantomex, and Nightcrawler have their own moments and interactions with Deadpool. And it’s in the space of these interactions that Remender forms his unique Deadpool story.

Even as he questioned some of the actions of his team, he never saw his fellow team members as merely killers or villains because he knows who he is and that he doesn’t come from a place to judge the others. In the end, to show that maybe he still isn’t all that responsible or mature, Deadpool gives a kid a stack of Playboy magazines. That’s maybe not the best thing to give to an adolescent clone of Apocalypse but it’s perfectly in character for Remender’s Deadpool. It’s the move of an uncle with no kids of his own, giving something that means a lot to him to his favorite nephew. That’s the family that Deadpool was looking for.