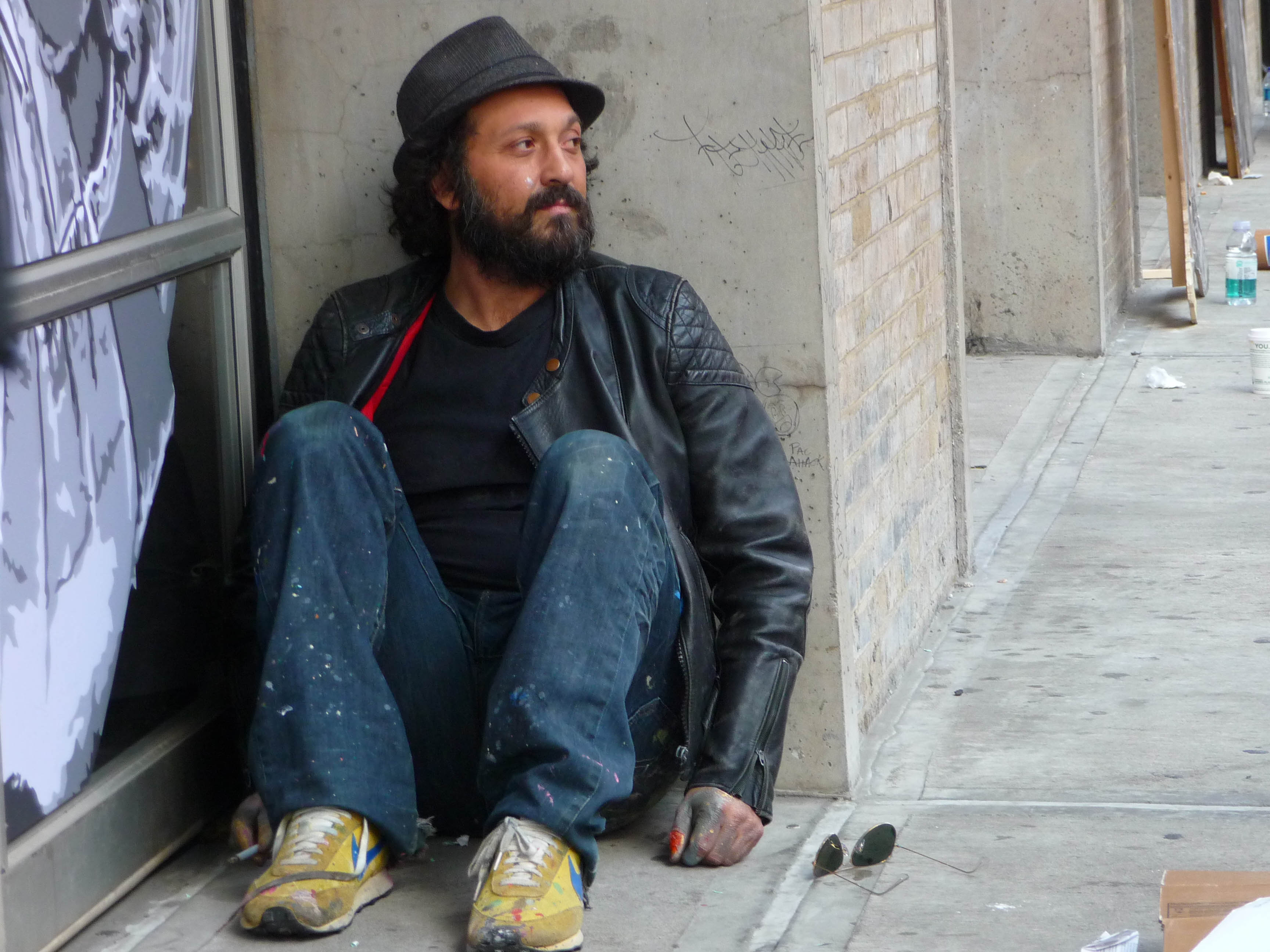 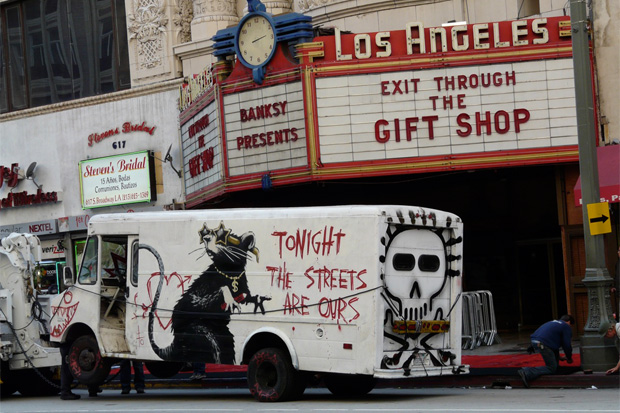 No film has ever generated the type of controversy enjoyed by Exit Through the Gift Shop; the film’s notoriety is literally unique. While many documentary films have been controversial due to their content, their approach or their claims to validity, Banksy’s street-art documentary is the first film to have people saying ‘If it’s real, it’s brilliant. If it’s fake, it’s even better’.

A quick explanation of the controversy: Exit Through the Gift Shop is, ostensibly, a documentary about an amateur film maker named Thierry Guetta who, through an unbelievable series of coincidences and luck, becomes the unofficial video-scribe of the emerging street art movement. The film is narrated in part by Bansky, the world’s most famous street-artist, who has never publically revealed himself and appears with his face covered by a hoodie and his voice disguised.

Gift Shop claims that Thierry is a cousin of famous British street artist “Space Invader,” who allowed him to film his 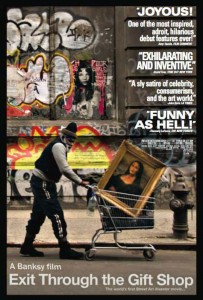 street-art exploits around France. It was through this association that Guetta gets introduced to Shepard Fairy and finally to the world-famous (and famously secretive) Banksy, who bafflingly agrees to let Thierry film him. After years of sycophantic association with these artists, Thierry Guetta starts producing his own work under the name Mr. Brainwash. Despite his work being horribly derivative, it sells for vast sums of money and he becomes an art icon himself.

The story was great, the footage amazing, and the film was incredible. The only question was, is any of it true? Was Thierry a real person, or had Banksy created a character to tell the story of a movement he was on the vanguard of? Was Thierry, in fact, Banksy himself?

I started this piece without a trace of journalistic neutrality; I was 100% certain that Exit Through the Gift Shop was staged. Not initially, but after hearing the arguments, re-watching the films several times and doing a bit or research, I had come to two conclusions: First, the film was not a documentary; it was a satire, a commentary, a fakeumentary, something we needed a new term for. Second, Theirry Guetta was certainly not real and was likely Banksy himself. I had all my interpretations worked out: Banksy had subverted the documentary form in the same manner he subverted public property, commenting on it while using it to tell his own story. There are a lot of good reasons to think all of these things, and I found tons of them, but ultimately, they aren’t true. And I can prove it. 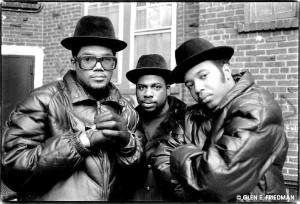 A few weeks ago, a small news item appeared on boingboing.net (http://www.boingboing.net/2011/01/26/thierry-guetta-aka-m.html). Sean Bonner, a noted media blogger and art gallery owner, ran a story about Theirry Guiletta, aka Mr. Brainwash, being sued by iconic counter-culture photographer Glen E Friedman for copyright infringement. Friedman, responsible for documenting the popular emergence of numerous sub-cultures, from skateboarding to Hip Hop, was suing MBW for illegally using his seminal Run DMC picture on invitations to his “Life Is Beautiful” art show. The news surrounding this story focused mostly on the issue of artistic ownership, but Bonner’s article carried two other important implications:

In the article, Bonner says “to disclose my connection to this, I previously co ran an art gallery that worked closely with Fairey, Friedman and Guetta’s cousin, Space Invader. I met Guetta many times via the gallery, long before he became Mr. Brainwash. Glen and I were both deposed in relation to Shepard’s dispute with the Associated press, and I consider both he and Shepard personal friends1”. This was quite a claim, since popular opinion held that Guetta was a fictional character.

I spoke to Sean Bonner over the phone, and he was only too happy to disclose his relationship with Theirry. Sean said 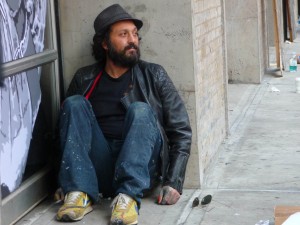 that when he ran Sixspace, a contemporary art-gallery in LA that featured work by, among others, Shepard Faiery, Guetta “hung around a lot, and was no one special. Not a remarkable person… at all”. When I asked him about his reaction to the controversy surrounding the existence of Mr. Brainwash, Bonner laughed and said “Yeah, that’s hilarious. I can tell you, I’ve been in the same room as Banksy and Theirry, and no, they’re not the same person.” He then said “as for the lawsuit, there aren’t too many federal cases against fictional characters.” And he’s right (of course).

A very quick bit of research turned up a public record of the case details, including the name of Friedman’s counsel and the case number. Douglas A. Lindne, of the Linde Law Firm, confirmed over the phone that he is indeed representing Mr. Friedman in his lawsuit against Mr. Thierry Guetta, aka Mr. Brainwash. Mr. Lindne returned my call, saying: “So, you’re entering the crazy world of Mr. Brainwash! Well, what can I tell you? He is a real guy, he’s been deposed, he’s given statements on the record and we really are suing him.” Linde confirmed the details of the case, saying that Mr. Guetta had “used the RUN DMC image in a variety of ways, including invitations, several limited edition prints and I believe one large-scale piece… which he sold and profited from.”

There you have it. While conspiracy theorists may jump all over the fact that Bonner, Fairey, Friedman and Bansky have been collaborating for years, in one form or another, the fact remains: Thierry Guetta is a real person. He has been deposed in a Federal court. He’s real, and he isn’t Bansky.

While that is not a terribly exciting outcome, nor it is what I hoped to find when I started looking, it is conclusive. And so we’re back to what we all thought after watching Exit Through the Gift Shop: That it is a brilliant documentary that captures the emergence of an important movement through an incredible character. It certainly is unbelievable, but in a more tangible, perhaps slightly less compelling way.