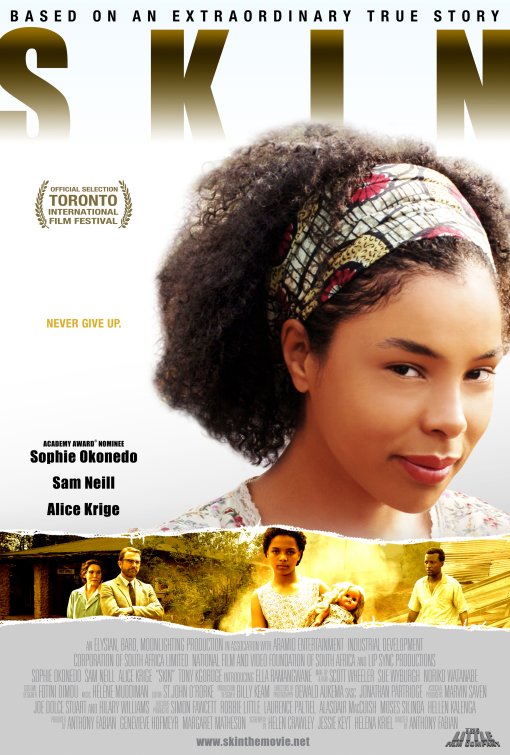 At first glance, Anthony Fabian draws a strong resemblance to Alan Cummings, so I expected him to be funny, which he was; witty, which he undoubtedly is, and a bit irreverent, which I saw shades of as well. Maybe because he’s British, I was slightly offset by his relaxed charm and uncomplicated manner. I expected him to have a stiff upper lip and be all about business. Well, he was all about business, the business of promoting his first feature film, Skin. And that’s a good thing.

Rarely does passion; creative genius and insightful nuance come together to create a cinematic product that examines the worst of us and the best of us at our most basic need, the need to be loved and accepted. In Skin, Anthony Fabian has created a liberating work that gets beneath the skin of pretension, revealing what is true, real and truly felt.

A couple of days before the New York premiere of Skin, Anthony Fabian spoke with me about the movie, his challenges, and what the making of Skin taught him about humanity.

You were born in San Francisco, but grew up in Mexico and London, later going to film school at UCLA.  Before you started making documentaries and films, you produced opera in Europe.  Why did you transition from producing opera to making movies?

Anthony Fabian: After film school and six years in Los Angeles, I felt I didn’t have anything significant to say. In LA everything is about the film industry. I moved back to England and I needed to get more directing experience, but because the film industry is quite small in the UK I found working in opera more interesting. And I could also use my music training. I directed operas for about five years. It was always my goal to go back to filmmaking. In my late 20s I made my first short film, which opened up some doors for me. I started making promotional short films for a classical record company, kind of MTV for classical music. I heard about Sandra Laing’s story and knew pretty quickly that I wanted her story to be my first feature film.

How did you come to know about Sandra’s story?

Anthony Fabian: I was listening to BBC radio and there was an interview with Sandra. I was very moved by the interview. I knew straight away that her story had the potential to become a very powerful film. 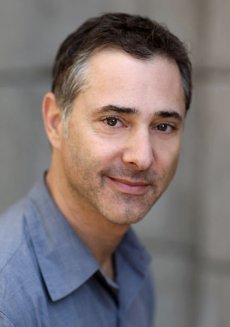 What was it about Sandra’s story that piqued your interest?

Anthony Fabian: The dynamic between Sandra and her parents. The need to be accepted and loved by one’s parents is very strong in all of us. I was very drawn by the acceptance, rejection and reconciliation in Sandra’s story. I was also drawn to the science fiction aspect of the apartheid system. The rules that were based on not very real things just seemed so ludicrous, yet, government policy and people’s freedom was dictated by these outlandish rules. Also, from a genetic point of view, Sandra’s story was fascinating.

Did working on this project answer any questions you may have had about race?

Anthony Fabian: Definitely. I’ve learned about how tribal we are as human beings. The need to find your people and where you belong is very strong in all of us. When you read Barack Obama’s memoir, “Dreams of my Father,” it is all about finding his people and identifying himself. That is a universal question that we all contemplate. We have to find our group and identify with people whether by race, gender, sexuality or culture. The downside to that instinct is excluding people that are different from the group. I am coming to terms with those wider meanings and they lead to things like war and issues over immigration. All these things relate to the story of Sandra Laing.

Who came up with the title of the movie?

Anthony Fabian:  My first title for the movie was Sandra’s Skin because I think it does all boil down to that. But for some reason that title didn’t catch fire, so to speak. Susannah York, an actress I have worked with on occasion, was having dinner with me and came up with the idea to call the movie Skin. My sales agent didn’t like the title and worked hard to try to get me to change it. He felt the title was pornographic. I do get slightly annoyed when people call the film Skins, which I believe is the title of a movie about Native Americans; however, I believe the title is very powerful and gets the point across.

Why your choice of Sophie Okonedo for the title role?

Anthony Fabian: First, she is a spectacular actress. She understood this role from the inside out because she was born to a Nigerian father and British mother. She grew up in England without her father and felt at odds with the white community, feeling that she didn’t quite belong. In primary school her classmates would pull her uniform skirt down to see if she was completely black. So, she could relate to Sandra’s story from a deep personal level.

We were also very lucky that when she accepted the role she had just been nominated for an Academy Award for her role in Hotel Rwanda, which gave her some currency and really helped us get some financing. There are only 3 or 4 black actresses that can bring investor money to a film. It is so unfortunate, but that is the way it is. 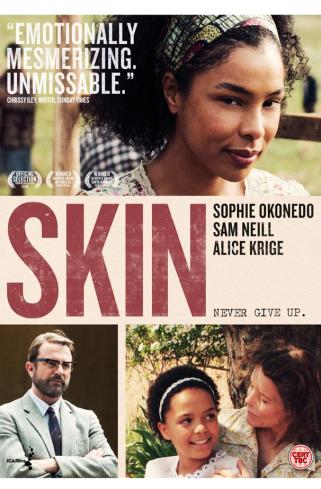 How familiar were you with apartheid in South Africa before starting this project?

I first saw this movie at the Latino Film Festival, and you talked about some distribution issues in the US, have you worked that out?

Anthony Fabian: Our release plans are to go to 15 markets. This film has had no support within the industry. I raised money for the release of Skin because I believe there is an audience for it. I really hope and pray that we have the last laugh on the industry with this film. The press has given us very favorable reviews.

We had a screening at the United Nations and we have been presented with the United Nations Time for Peace Award. Sophie has been nominated for a BIFA Award. So, we are sitting on this incredible product that every single distributor rejected. In some way we are like Obama, who was not considered a political frontrunner. Nobody wanted Obama but the public. I have to believe the public is going to want to see Skin. And I am backing that horse.

What do you hope audiences get from this film?

Anthony Fabian: The message of this film is very much the message that is encapsulated by the African concept that we are all bond together by our common humanity. The skin is just an organ, and under that organ we are all human. I hope audiences get that from this movie, the oneness of humanity.

What’s next for you?

Anthony Fabian: I have whole slate of projects that I am working on right now. One is a ballet project and it’s going to be big.