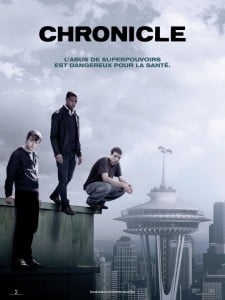 There’s no more horrifying an idea than one film being both a super hero and found footage vehicle. On their own, they are blights on the release schedule; putting them together in one picture is unutterably disheartening. The unlucky product of this collation is Josh Trank’s debut Chronicle. The issue with any film that uses the character-carried camera as a mode of storytelling needs justification for the tired format to relevant rather than a means to sell a picture which lacks distinction otherwise. Chronicle is one of the only examples of this type of cinema that fully justifies that aspect and is not betrayed by a shot or a scene which shatters the illusion of reality that the form strives for.

The set-up for the camera as a character is disclosed in the opening scene where Andrew (Dane DeHaan) is hiding from his drunk and abusive father and says “I’m filming everything now,” and he means everything. The camera is an emotional crutch for his lack of friends and social isolation. The only friend, Andrew, has his cousin Matt (Alex Russell), who has a fair share of neuroses of his own. After school one day, Matt and Andrew go to a high school party, still with the camera in tow. Tossed from the party for filming something he shouldn’t have, he sits outside alone only to be met by the super-popular Steve (Michael B. Jordan). Steve urges Andrew to come with him because he and Matt have discovered something unbelievable, and without going into detail further, they end up with telekinetic superpowers.

“Chronicle makes for an interesting counterpoint to Kick-Ass, Super and even Batman as artefacts which celebrate the idea of the everyman as a superhero…

Whether the camera is used as an emotional crutch or personality substitute, the found footage sub-genre always undoes itself by trying to achieve too much under the banner of realism. Chronicle is the best use of the camera as a character rather than as a tool voyeuristically gazing from the outside to date. The camera is passed around from character to character, and it’s not just the one camera that the footage is taken from; eventually it’s taken from other cameramen, CCTV footage, police car footage, and other sources to make one seamless loop of footage. Unfortunately, though the camera is implemented more seamlessly than ever before, there is still no distinct reason for it to be shot this way rather than through traditional means.

Chronicle makes for an interesting counterpoint to Kick-Ass, Super and even Batman as artefacts which celebrate the idea of the everyman as a superhero by having these three teenagers use their powers in Jackass-style pranks and as a one-up in the perpetual battle for high school popularity. That playful sense of discovery is what elevates Trank’s debut above the atypical superhero origins story, using their power to indulge irresponsibly and generally behave like a normal person would if this kind of greatness was thrust upon them when they are blank canvases in the gap between childhood and adulthood. The performances support this; they might be arrogant or hard to like but they never stray from the film’s self-imposed reality. “At 26 years old, writer Max Landis and director Josh Trank have to be credited for being accomplished beyond their years…

The lack of motivation to be heroic leaves it open for the three leads to ultimately lean alternately good or evil, and the catalyst for this shift comes midway in, when a car is pushed into a reservoir. From there it mutates from something playful into a surprisingly violent showcase for the young director. The translation might not be seamless and the use of Andrew’s father (Michael Kelly) as an abusive figure is over-exaggerated, showing a lack of humanity in a film whose cast is fully formed and three-dimensional. Otherwise, the jump from discovery to destruction is engaging, exciting and thrilling. The final twenty minutes unfold like a more grounded version of Katsuhiro Otomo’s Akira, throwing in a couple of visual references for good measure.

At 26 years old, writer Max Landis and director Josh Trank have to be credited for being accomplished beyond their years. There might be problems here and there, such as some unfortunate CGI, but for a debut feature with a budget of $15 million, Chronicle embarrasses directors that have attempted to achieve a similar end with budgets stretching into the hundreds of millions. It gets around its self-imposed stylistic limitations with guile and intelligence by presenting the most interesting and watchable superhero origin since Batman Begins.