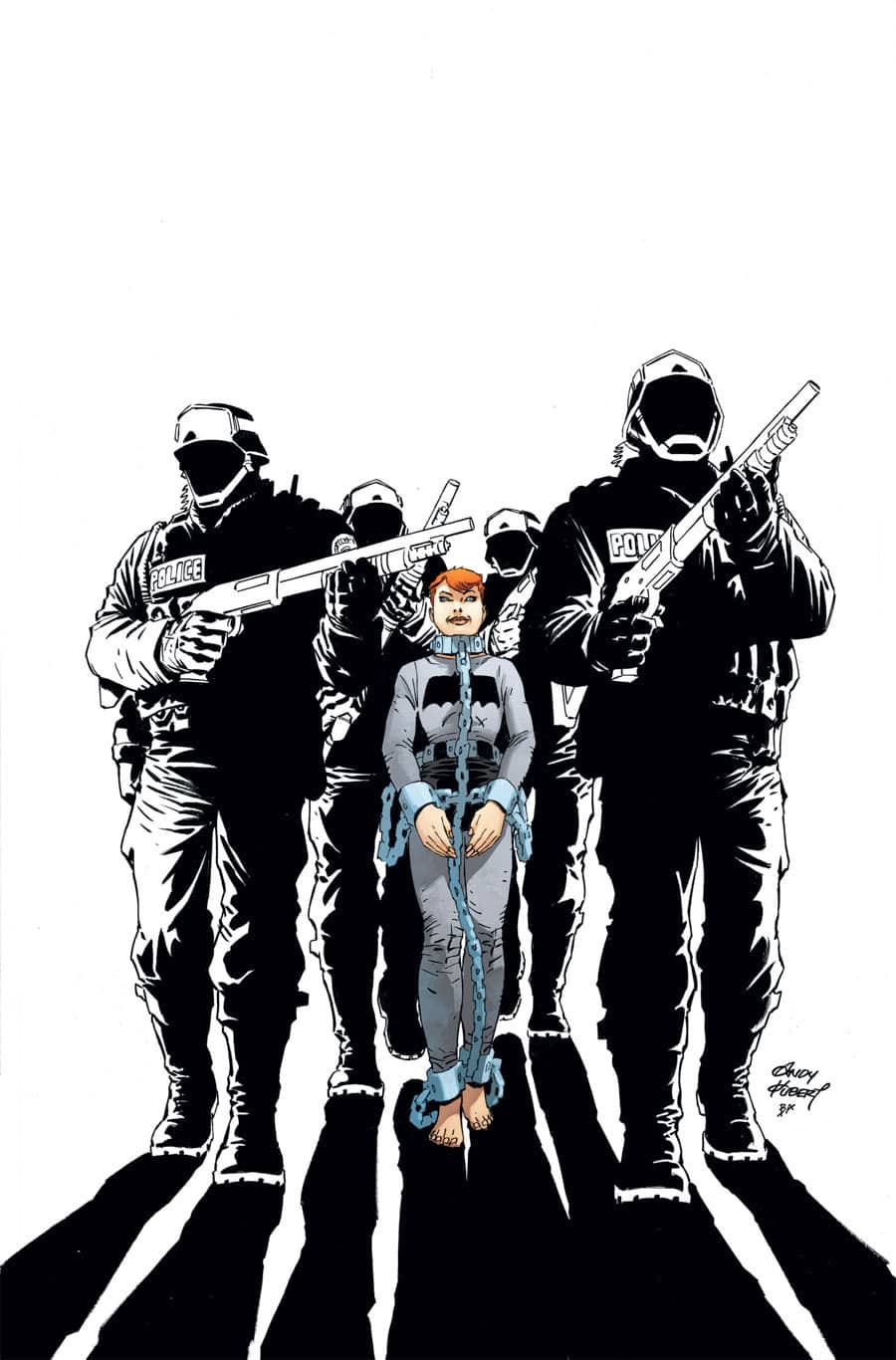 The Dark Knight III #2 contains a pair of prison escapes that set in motion what is the series’ conflict for now: Carrie Kelly’s Batman vs. Lara, the daughter of Superman and Wonder Woman. Or to put it in a more epic sense: divinity versus humanity. Writers Frank Miller and Brian Azzarello make Lara like Superman if he had no tether to humanity through his humble secret identity as Clark Kent and upbringing by Jonathan and Martha in Smallville. She has no secret identity and believes that it is the destiny of the Kryptonians to rule the universe. Ray Palmer, the brilliant scientist and former Justice League member, is just a means to an end for her. On the other hand, Carrie Kelly is incredibly mortal and frail. Artists Andy Kubert and Klaus Janson show this in the comic’s opening page as she takes blow after blow from Gotham’s finest with colorist Brad Anderson making sure that her red blood floods the background.

The Dark Knight III #2 slows its roll a little bit after last issue, which managed to stuff a reference to police brutality in the United States, an epic chase scene, frozen Superman, and one of the best final page twists of 2015. Much of the issue is dedicated to Gotham police commissioner Ellen Yindel interrogating Carrie Kelly about the final fate of the dead Bruce Wayne. This conversation is intimate, painful, and another masterful piece of storytelling from Kubert and Janson. Kubert turns the friendly nine panel grid into prison bars, and Janson lengthens these black bars on Carrie and Yindel’s face as she tells the story of Batman’s last night. Kubert’s work is at his most grotesque when he draws the twisted Dick Grayson from The Dark Knight Strikes Again beating Batman to a pulp. The imagery is strong in these scenes especially with the return of the heart beat pulse from the ending of The Dark Knight Returns , but some of the dialogue is a little weak, like Carrie calling herself Batman’s “prick”, which is honestly disturbing if it’s meant in the double entendre sense or claiming she ate Bruce’s body. However, all the awkwardness dissipates in a final, single page where Carrie simply tells Bruce, “You’re not alone.” Even though Batman is known as a silent, lonely creature of the night with no parents, dead Robins, and the inability to have a normal romantic relationship, he always has his Bat-family even in this dark alternate universe.

But the hopeful words “You’re not alone” takes on a more sinister meaning in light of Ray Palmer and Lara’s unshrinking of the bottle city of Kandor and unleashing “the Master Race”, which happens to be Kryptonians. Palmer is full of misgivings about getting the Kryptonians back to normal size and mentions that he tried to do this with Superman, but had negative results. This is also where he mentions Lara’s lack of humanity, which she isn’t insulted in the slightest and boasts about her Amazon heritage. (Which she then rejects for her Kryptonian in Azarello, Miller, and Eduardo Risso’s backup story featuring Wonder Woman.) Miller and Azzarello also use Baal’s (a Kryptonian A.I.) reaction to the throwaway phrase “God willing” that Ray uses when he’s in the final stages of his experiment to show that the Kryptonians see themselves as the boots to the ants that are humanity. The ant/boot metaphor becomes very literal towards the end of the issue when Quar, the leader of people of Kandor with a messiah complex to boot, squashes Ray as the panels shrink into black. Fascist aliens with the powers of Superman are a tall order for the beaten and battered Carrie Kelly. But she does have an unexpected ally thanks to another nice final page twist from Azzarello and Miller. 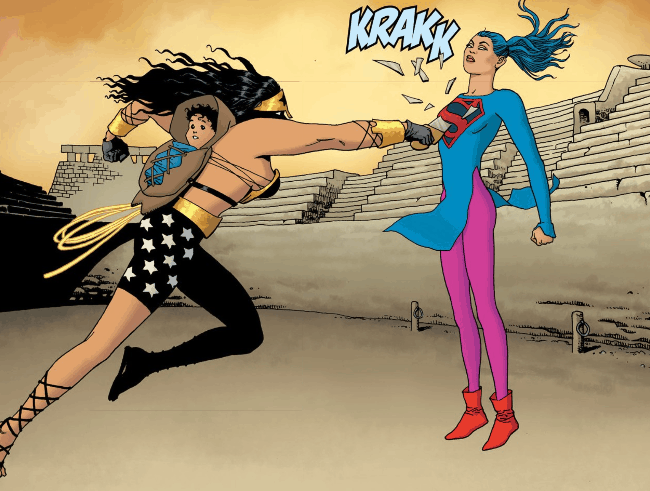 The backup story The Dark Knight Universe Presents: Wonder Woman #1 by Miller, Azzarello, and 100 Bullets‘ Eduardo Risso is an excellent character study of the Amazon warrior framed as a sparring match between her and her daughter Lara. Her narration mentions how she was cut off from the outside world while also mentioning about how children think they know everything because the world sets them up as special. As a tail-end member of the self-esteem and participation trophies generation, this is a wise truth from Diana. Wonder Woman definitely is a better trained fighter with steady form that Risso shows in a double stacked grid of panels. But all her skill and power is nothing compared to Lara as seen in a two page splash where her sword just flat out breaks on her Kryptonian skin. And then she flies away: the embodiment of godlike powers unchecked. It will be interesting to see where Wonder Woman falls in the upcoming war between Kryptonians and humans, or if she decides to stay neutral and try to keep some semblance of Paradise in Themiscyra.