Ash vs Evil Dead returns to where all the evil started, and the results prove deadly for a key player. Having Ash return to the infamous cabin from the Evil Dead films is a neat idea, and one of the most appealing elements of the latest episode, “Ashes to Ashes”, comes from the nostalgia of having Ash return to where his long, bloody journey first began.

Ash ditched his friends last week, yet the resilient Amanda (Jill Marie Jones) was able to find him. This gives Ash vs Evil Dead a chance to flesh out Amanda, who has been stuck on the sidelines most of the season. Ash and Amanda enter the cabin, and the chemistry between Bruce Campbell and Jones continues to seem genuine. But the newfound interest the show has in Amanda turns out to be a dirty trick, because before the episode ends, she’s killed!

Killing Amanda is a bold move, especially when she was just starting to come into her own as a character. Of course, with Ash vs Evil Dead, there’s always a chance she’ll be rising from her bloody demise sometime soon, but for now, Amanda is no longer among the living.

Episode writer Michael J. Bassett attempts to recapture some of the lunacy from the original Evil Dead by having all sorts of deranged goings on. Ash and Amanda split up, with Ash going into the famous work shed behind the cabin, where he encounters the severed skull of his dead girlfriend Linda right where he left it — locked in a vice. Ash gets stuck in the cabin, though, and it’s not too long before Linda’s skull has regenerated its flesh (and its very out of date hairstyle) and is taunting and mocking Ash the way only those pesky Deadites can. Back in the cabin, Ash shows up and woos Amanda with the prospect of running away from all this and starting a new life together. Amanda is starting to come around to the idea when she realizes this isn’t really Ash. Instead, Ash’s sentient severed hand somehow grew a brand new Ash, and once the jig is up, this Evil Ash begins to pummel Amanda mercilessly. 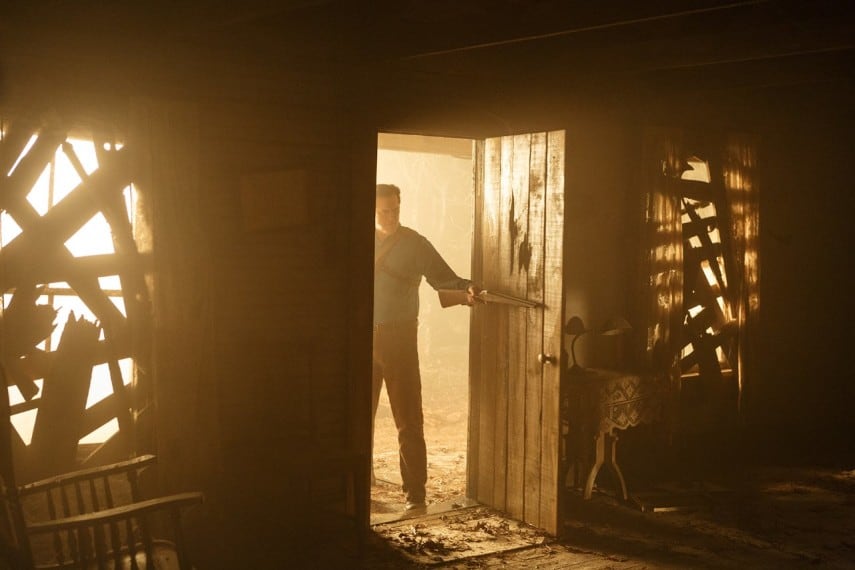 Other moments of “Ashes to Ashes” are devoted to Kelly (Dana DeLorenzo) and Pablo (Ray Santiago) wandering around the woods, having split up from Amanda in their search for Ash. The spatial order of this is a bit wonky, as there’s no sense of where exactly Pablo and Kelly are in relation to the cabin, and how they got so far out into the woods while Amanda seemed to find the cabin mere seconds after Ash did. While DeLorenzo and Santiago continue to bring charm to their characters, these moments with them in the woods detract from the overall weight of the episode. There are moments that still tease the possible romantic relationship between the characters while also introducing a new group of earth-friendly backpackers. The backpackers remain elusive and undeveloped, meaning they’ll likely reappear next week to become Deadite fodder.

Early in the episode, Ash finds a dead bird and quips, “Sorry Tweety, nothing survives out here.” The overarching story of Ash vs Evil Dead has dealt with the legacy of death Ash leaves wherever he goes. Everyone close to Ash ends up dead, and having Amanda meet a bloody end, right after Linda’s head has been taunting Ash that this very thing would happen, further cements this. It’s a dark message for such a silly show, but it’s also a nice way of reminding audiences of the less-than-comedic roots the story springs from. Of course, there’s still plenty of silliness to go around, this time in the form of a smackdown between Ash and Evil Ash where the two keep predicting each other’s moves and weaknesses since they’re technically the same person. Director Tony Tilse shoots it in the typical slapstick manner, which is an interesting contrast to the gruesome, almost somber way he films Amanda’s slow, painful death.

After several middling episodes, “Ashes to Ashes” comes across as a step in the right direction. But if the only way to improve itself is to start killing off its main cast members, the showrunners might want to go back to the drawing board for future seasons.