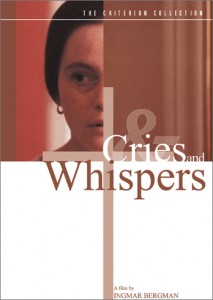 The inanity of Bergman’s canonisation has always baffled me: I have tended to endure his films as a bitter medicine – worthwhile but unenjoyable, classics that everybody wants to have watched but nobody wants to watch. Subjecting myself to Cries and Whispers on the merit of Bergman’s reputation (a reputation which must have originated from a claque of obsequious film critics and scholars who probably jumped on some incomprehensible-European-language-arthouse-must-be-praiseworthy-though-unwatchably-tedious bandwagon) with no background knowledge of the film, cemented my hitherto opinion of his oeuvre. in their family mansion. These strikingly winsome aristocratic Scandinavian beauties (most of the cast are part of Bergman’s habitual posse with two of the priapic director’s mistresses, Harriet Andersson and Liv Ullmann, as well as best pal Erland Josephson keeping things in the family) toy with various would-be dark and stifled ‘emotions’, existential and physiological pains, inasmuch as their desiccated Nordic disposition allows for the expression of a histrionic, fitful sensibility which is as close as the characters get to feeling.

One of the sisters, Agnes (Harriet Andersson) has terminal-stage cancer and the other two, Maria (Liv Ullmann) and Karin (Ingrid Thulin) have come to the mansion to ‘assist’ her in her final earthly moments. Instead of sisterly bonding, however, the gruesome agony of Agnes’s disease seems to suffuse them with disgust, uncorking tawdry sibling rivalry, old hatreds and various aristocratic-life traumatisms (unloving husbands and lovers, sibling indifference) all interspersed with some stale, vapid woman-on-woman kissing (hard to tell what went on in Bergman’s head directing his mistresses frolicking about, but apparently he was coming out of a painful romantic breakup…) The most ‘torrid’ scenes are between the martyred Agnes and her self-abnegating maid, Anna, whose analgesic methods include proffering the patient mouth-on-mouth kisses and a bare, udder-like, wet-nurse-kind of bosom. All this to signify the motherly figure of the maid, a stout, low-class servant providing Agnes with the one real tenderness, while her trim, squeamish, self-absorbed sisters sort out their various psychologically complex, aristocracy-becoming issues (apparently marriages were mostly loveless in nineteenth-century Sweden…) The ‘mother’ issues hark back to Agnes’ adulation of her distant, cold, disarmingly beautiful mother, the antithesis of the homely Anna, a mother who apparently favoured the prettier Maria while neglecting Agnes. Whether or not this sibling predilection was actual or imagined by Agnes, the present-day result is the symbiotic relationship between patient and maid (who as it happens has lost her own daughter).

The bond between Agnes and Anna is not the sole instance of repulsive physicality (Agnes: “Do I smell very bad?”, Anna unbuttoning her bosom: “No”), a deformed proximity which accords with the stultified emotional register of the film: the histrionic dialogues are occasionally interspersed with animal-like howls; the camera lingers purposely over a perturbing kiss between the two surviving sisters who otherwise detest each other; the elder one resorts to genital self-mutilation presumably to ward off her husband’s advances, who in keeping with the rest of the secondary male characters is a sordid caricature of a man (his idea of a ‘tolerable funeral’ is no one weeping or growing hysterical). Ironically, the most endearing male part may be that of the glazed, buttoned-up, puritan-oozing Lutheran minister who delivers the supposedly profound but impassive last rite to Agnes.

A lot of the praise heaped on this film, as well as the cinematography Oscar, has gone to the use of colour and art direction. Indeed, the mise en scene relies heavily on a mosaic of red (blood), white (innocence) and black (mourning), conferring to the film a stagey, heavily artificial texture. Why the preponderance of red? Apparently, when Bergman was a child he imagined the human soul was red. Groundbreaking? If the biggest artistic innovation of Cries and Whispers is the saturated colour palette, then not much would be left on stripping off the colours but beautiful actresses wearing impenetrable, icily Scandinavian masks. Insofar as watching Cries and Whispers was a torturous, painfully endured viewing process, I empathised with Agnes’s deathbed agonies. I am not sure if that is the kind of empathy Bergman had in mind.

The DVD includes an interview with the two aging patriarchs, an arrogant Bergman in his eighties and his faithful wingman Josephson in his late seventies, from which we learn that the director was once fined for threatening a film critic who ‘pursued’ him for a long time in a Swedish newspaper. I think I know whose side I’d be on.