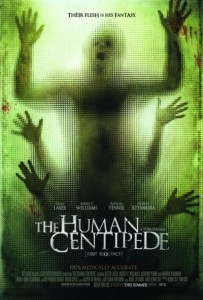 “Six adds new life to the traditional ‘kidnap and torture’ genre that we’ve previously seen in such films as Hostel or Martyrs.”

Every once in a while a film comes along that pushes the boundaries of blood and torture unlike anyone has ever seen.  When that happens, it isn’t long before another film arrives that pushes the limits yet again.  Now with the introduction of Director Tom Six’s creepy The Human Centipede: First Sequence, it makes one wonder what gloriously sick cinematic incarnations will follow.

While on their European vacation, two American girls (Ashley C. Williams & Ashlynn Yennie) are forced to seek refuge from the rain when their car breaks down somewhere in Germany.  After trekking through the wet woods, they come across an isolated villa where they meet their “saviour” – retired surgeon Dr. Heiter (Dieter Laser).  After short and awkward pleasantries, the girls are quickly drugged and restrained in Heiter’s basement along with an unknown 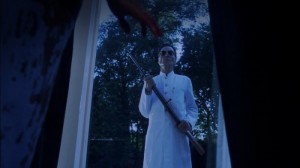 Japanese male (Ahihiro Kitamura).  Unfortunately for them, they become a part of Heiter’s insane medical fantasy that involves surgically melding their bodies together to transform them into (you guessed it) the human centipede.  But that’s only the beginning.  Permanently hobbled and stitched together from mouth to rectum, the trio must endure their physical horror and work together to fight against their mad creator. 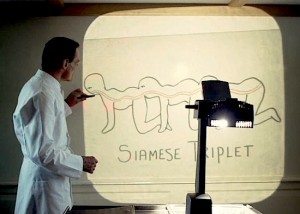 Without a doubt, The Human Centipede is one of the most twisted and perverted films to come along in recent memory.  It’s also one of the most thrilling and inventive.  Believe it or not, as demented as the story sounds, there is very little blood and gore on screen.  Writer-director Six expertly suggests much of the film’s terror.  This is especially evident when Heiter preps for the operation.  He uses a pen to mark where his incisions will be made, but we never see him cut.   In fact, much of the shock is left to the imagination, which can often yield creepier results.

Six adds new life to the traditional ‘kidnap and torture’ genre that we’ve previously seen in such films as Hostel or Martyrs.  He laces the atrocities in the film with so much dark humour, it’s as if we are being treated to a 3-ring circus with the human centipede as the main attraction — and much like a lion tamer, we are mesmerised by Heiter’s attempts to domesticate his new pet.

Dieter Laser’s performance as the eccentric and maniacal Dr. Heiter is a big reason for The Human Centipede’s success.  In lesser hands, Heiter may have turned out to be another morose psychopath like Saw’s Jigsaw, but Laser isn’t afraid to camp it up and have fun with the character.  His intense stares and deadpan delivery are chuckle-inducing, but it’s his glee for his centipede that’s outright entertaining.