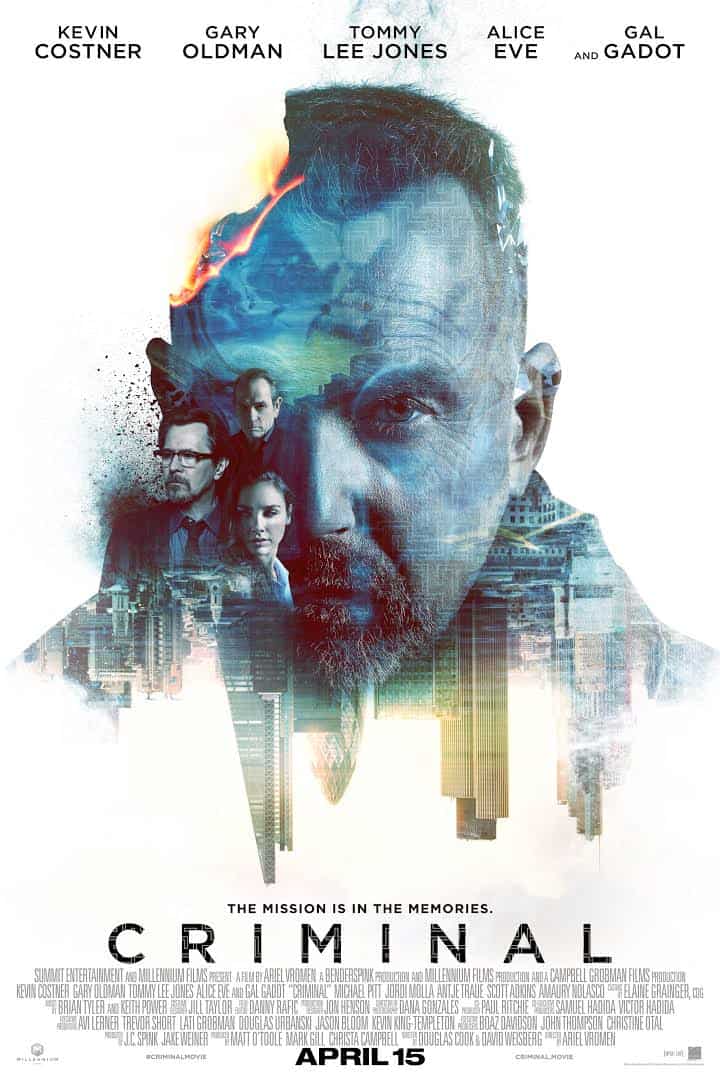 Should you browse through the A-list caliber of the cast and decide to give Criminal a chance, don’t. A film where CIA agents swap minds with violent sociopaths seems like it should be a fun surprise like 2014’s Lucy, but Criminal is missing the crucial element of that film: Luc Besson. An unusually bizarre plot needs to be accompanied by a spark of insanity, and, since the auteur is not involved, the spark is also missing. Regretfully, Criminal makes up for its lack of ideas with blood, guts, and even more blood.

The film stars Kevin Costner, but for the interest of the plot, Criminal begins with Ryan Reynolds as CIA agent Bill Pope. His recent mission involves delivering ransom money to “the Dutchman” (Michael Pitt), but thanks to the interference of an anarchist on many most wanted lists (Jordi Molla), Pope is killed before he can complete his mission. Much to the dismay of the rest of the London agency, the Dutchman’s location was known only to Pope, and he is capable of launching missiles anywhere on the planet. Left with few alternatives, agency head Quaker Wells (Gary Oldman) resorts to experimental science to get the information from Pope’s head. Enter Dr. Franks (Tommy Lee Jones), the resident expert who has successfully transferred memories from previous patients.

The film never really explains why only a convicted murderer with brain damage would be the ideal candidate for the procedure, but Criminal keeps rolling right along. Jericho Stewart (Costner) has a traumatic head injury in his background that leaves him incapable of experiencing empathy. Yet this doesn’t stop Jericho from invading the home of Pope’s grieving widow Jill (Gal Gadot). In a few select moments where two actors legitimately bring pathos to their roles, Gadot and Costner almost elevate Criminal beyond its meager script, but Jericho must leave to go rampaging around London, beating down hipsters and locals. This is all build-up to his next big target, the Dutchman. Revenge like this should be cathartic, but Pitt and Molla play such stock characters that the final act merely feels perfunctory.

Ariel Vroman’s biggest crime is taking such an outlandish concept and wringing anything fun out of it.  The first and third acts are book-ended by chase scenes (the first being excellent), but there is little connective tissue elsewhere that could be considered entertaining. Gary Oldman spends most of his screen time bellowing commands and Tommy Lee Jones is just there. Adding Costner to the mix should have proven a welcome JFK reunion, yet the dynamic falls flat. Oddly enough, Criminal is the third film in which Reynolds has switched minds (Self/less and The Change-Up being the others) though his presence is minimized here.

Kevin Costner succeeds despite casting against type as a sociopathic convict, eager to dispense a thrashing to anyone and everyone. Choosing Costner to lead this film was an inspired choice, but only he seems to know playing it straight doesn’t work. In a picture where Piers Morgan cameos and characters shout “You’re bang out of order, you are!” a bit of tongue-in-cheek would have done wonders. If Criminal has any life at all at the box-office, it is purely due to Kevin Costner’s exuberance in a role no one would have thought to give him.