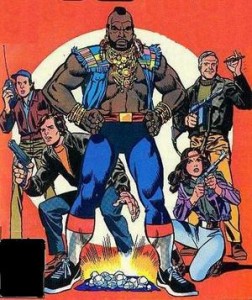 When I went, aged 7 or 8, to audition for Music College, I was asked to sing “the first song that came into my head”. That song was the A Team theme music, by Mike Post. My older brother, in his audition, apparently sung the same thing. My mother chastised us afterwards, but clearly our renditions of this truly inspiring piece of music were acceptable, as we were both accepted.

There are some themetunes that beckon us to the television, signalling our favourite show is about to start. There are some that we find ourselves humming merrily as we go about our day. And then there are those we shudder through, mute, or fast forward. Here are ten of the most annoying – I’m sure you have your own particular list of those which grate your nerves and become unwanted earworms.

I know it’s internet lore that Chuck Norris can do no wrong, but he should have known better than to sing this themetune, by Tirk Wilder. “When you’re in Texas look behind you” is good advice though, a lot of oddities have come from there.

9. Grange Hill and Give Us a Clue (same theme tune)

Basically, these two made the list because they’re the same tune. That’s just lazy. Also, the song in question is called “Chicken Man”, by Alan Hackshaw, and was allegedly written just an hour before it was composed. It is an injustice that such a slapdash approach should become the themetune for two long running shows, so Give Us a Grange Hill takes ninth.

Two things are immediately apparent about this tune by Devin Powers. One is that it is the least romantic thing you are likely to hear today, and the other is that it seems to last longer than the worst date you’ve ever been on.

I’ll give Three’s Company credit for their impeccable apostrophe use, but this song by Joe Raposo is one of the most enduringly painful audio memories of my childhood. It somehow manages to sound intentionally almost out of tune, and is not even cheesy enough to be excused for its other flaws.

There are several things that Joss Whedon has got right, television-wise. This themetune is definitely not one of them.

It pains me greatly to feature my favourite TV show on this list, but this song by Howard Goodall – composer of such pleasing themetunes as Mr Bean, Red Dwarf, Vicar of Dibley – is stilted and maddening. I skip it whenever humanly possible.

What’s that? “I can’t HEAR you!” Apparently when Hank Smith Music wrote this they were supposed to make the most annoying song on TV, so that kids watching it on Saturday mornings would aggravate their parents, so the fact that it’s only 3rd may constitute a failure.

2. Star Trek: Enterprise – “Faith of the Heart” or “Where the Heart is”

It seems a natural idea: why not take a song by Diane Warren, sung by Rod Stewart for the Patch Adams soundtrack and use it for one of the most successful SciFi franchises of all time? What could possibly be wrong with that?

I suppose this is a cheat, as it’s the closing song and not the opening one, but this piece of music by Lee Bernstein must be one of the most hated songs on the globe. This was one (of many) reasons I banned Barney from my household.