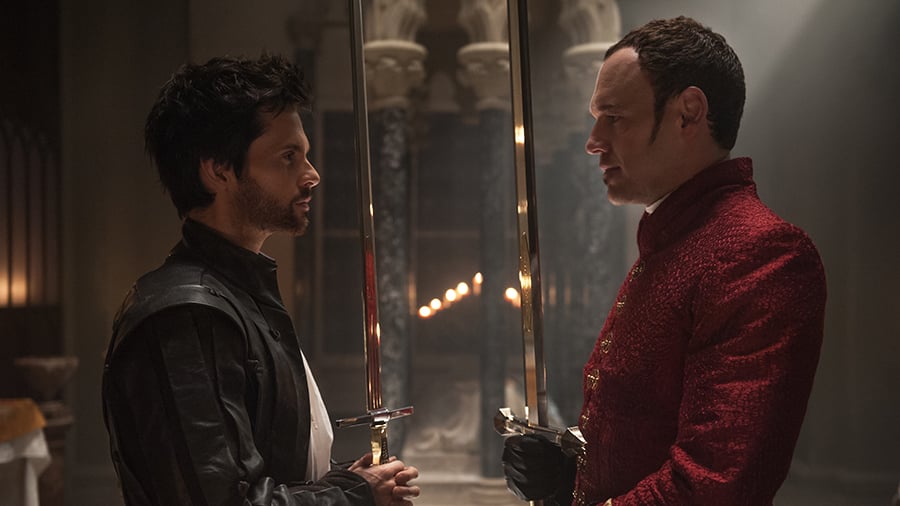 For as much fun as Da Vinci’s Demons is sometimes capable of being, there hasn’t really been a moment in its early run that’s been moving–a scene that has executed a payoff after building emotional attachment either to a character or situation. Even Giuliano’s death in the first season finale was a bit lost amid the chaos of that episode. “The Blood of Brothers” corrects that standing omission in a way that is deeply satisfying, yet strangely untimely. The final scene of the episode (depicted above) certainly works as an ending, and I’m extremely glad that the cliffhanger isn’t going to end up being DVD‘s calling card. But doesn’t it seem like the episode’s first climax–Lorenzo speaking to the people of his city–and the falling resolution afterwards make for a stronger punch?

“The Blood of Brothers” pretty much functions as a direct sequel to last week’s entry, name and all (“The Blood of Man”). So, why not let the Florence-is-burning mini-arc go the full two episode distance, rather than resolving it midway through “The Blood of Brothers”? This might seem like a petty issue to linger on, but it is weird watching the episode, experiencing those moving scenes, feeling that satisfaction and then realizing there’s still a half hour to go. To make it clear, however, that first half is stronger than anything DVD has done to date. There’s something inherently gripping about a figurehead like Lorenzo telling the people that the power is in their hands. For the cynic in all of us, it’s terribly silly and not believable. But in the moment, when he’s struggling to even get the words out of his mouth, it works. And it works well. Elliot Cowan is totally convincing when conveying how much Florence means to him as his home and as an idea. It’s a plan that’s based on manipulation, but it’s also easy to see why the mob favors someone more charismatic and sympathetic like Lorenzo than the mousy Pazzis. The journey that follows, from Lorenzo descending the clock tower where everyone is waiting for him to the ride back home and his final wave to Florence, is the epic kind of stuff that more people were probably hoping from DVD‘s first season. Here, despite how oddly placed it is in the structure of the script (and also considering we’re supposed to be feeling satisfaction at the same time people are being murdered), it helps kick the season off with a bang.

All that said, the actual conclusion to “The Blood of Brothers” also works effectively enough and sets up several of the characters’ arcs for the season. It might be too cheesy for the likes of many, but Lorenzo’s speech to Leo about sharing blood and him being a sort of replacement for Giuliano as a brother while giving him half his grandfather’s sword fits perfectly with the genre and the tone DVD is going for. Like many instances in this series, it’s just as easy to roll your eyes as it is to buy into it and let it warm your heart. Less warm are Clarice’s feelings towards Vanessa, who carries Giulian’s child and Lorenzo’s hopes with it. Considering how splintered this season looks like it’s going to be (we get some more scenes with Sixtus, away from the action), I’m really hoping they stick with Vanessa as a viewpoint character whenever they can. She’s in a rather interesting situation and finds herself at the center of legitimate commentary within DVD. Class divides are easy and useful ways of exploring certain themes, and Clarice’s complete dismissal of Vanessa as a person is a good entry into that discussion. Plus, it would be a way of keeping Lara Pulver on the screen, which is something no one would be complaining about.

Of course, there’s also indefensible things like the convenient way Zoroaster and Lucrezia get out of their bind. Zoroaster works fine as the pig he is, so their brief conversations are at least light interludes in the episode. But this is the problem with relying on plot devices like the cliffhanger. If it’s handled in this way, it just cheapens the writing. Otherwise, the conversations that both characters share with Leonardo show some nice confidence. Leo and Lucrezia’s parting isn’t too romantic or false in the expectations they have of each other. And what Zoroaster says to da Vinci is especially necessary for us as the audience, basically claiming “You’re crazy. You’re plots are crazy. I don’t believe in this stuff. Once we get Nico, I’m out.” Having faithful companions is a quality many stories take for granted. This is a way of making the characters seem self-aware so that they’re not just blindly following our protagonists, lacking ideals and stakes of their own. So, even if “The Blood of Brothers” feels like half an hour of characters reacting to things following a misplaced climax, the script is full of intriguing insights both textually and sub-textually. The extended season order allows for this by giving the writers more time to address secondary characters. Now, we should be expecting to see the search for the Book of Leaves begin and the season to really take off.