My love and excuses for Darkest Dungeon start sounding like an abusive relationship after a while. It’s a brutal game that punishes me terribly whenever I slip up, or sometimes for seemingly no reason at all, but I probably did something wrong to deserve it at some point. It’s by no means perfect, but its profound devotion to being exactly the game it wants to be no matter who it alienates is commendable all on its own. Going into it with no knowledge of its development process, I would say it seems like a game that’s designed for a niche audiences with no concessions to those who don’t fit into that category, but that’s not the case.

Having followed the game for a little over half a year and played several different builds throughout its early access period, I’ve seen a lot of changes and adjustments to the balance as new features were implemented, forcing me to constantly rethink my strategies. That’s nothing unusual – of course an unfinished game is going to have balancing issues that get tweaked back and forth. What sets Darkest Dungeon apart from other early access games is its difficulty as a central part of its thematic appeal. Just like Dark Souls, or Super Meat Boy and other games whose selling points include their unforgiving difficulty, frustration and rage-quits were expected, rather than unfortunate outcomes of the challenge. Too generous with their balancing, and the brutality of the experience would be lost, but too punishing, and no one would play. It’s a precarious tightrope, especially for a game in development.

Several times over the course of early access, changes were made based directly on player feedback. I’m all for a bit of developer transparency, and I wish good luck upon any designer who wades into the murky depths of a public forum to talk directly to players. A lot of good suggestions were made on various platforms – Steam forums, official forums, even Reddit – that actually ended up implemented into the game one way or another. As someone who grew up in an era when game designers were held in such mystique that “my dad works at Nintendo” really meant something, it’s pretty exciting to be able to speak directly to developers and actually have them listen. 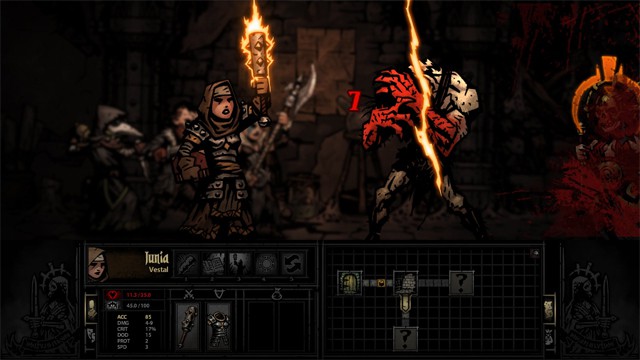 It should be an ideal “everyone wins” scenario, but the problem is players are divided on how the game should actually play. For every reasonable discussion of balance, there were people taking sides, forming camps around two fundamental ideas: “this game should be harder” and “this game should be easier”. Bile and insults were thrown, the developers got called incompetent or other nasty things an innumerable amount of times, and yet they still continued to listen and respond to the community, braving the horrors within much like the dungeon-crawling heroes of the game itself. The arguments became more personal, with one side claiming that “casuals are ruining it for the real players” and the others saying “the elitists are ruining it for everyone else”. Only with more vulgarities bouncing back and forth.

Unlike other games, this isn’t just something that can be done away with by adding a difficulty selection and calling it a day. Sold as a game that’s supposed to be harsh and unpleasant at times, taking the sting off of its nastier moments runs the risk of eliminating all the tension the game’s aesthetics deliberately evoke. After all, a game about the stresses of dungeon crawling wouldn’t have much impact if the average player rarely had to worry about death or madness. The game’s difficulty moved back and forth around a personal sweet spot for me as development went on, eventually falling into a nice middle-ground by the time of release. I’m satisfied, but as made abundantly clear by a vocal minority, not everyone is happy, with both sides of the previous argument sometimes stating that listening to the other faction caused the developers to ruin the experience.

The most frequently stated complaint, one seen in a number of top-voted negative Steam reviews, is that the game relies heavily on randomness to determine the outcome of almost everything. Personally, I think those impressions are wildly overblown. Played well, disaster can almost always be prevented, but a loss here and there is almost inevitable in the long run. At the time, every defeat feels absolutely crushing, enough to even make me want to stop playing, even when it was my fault most of the time. A peek at those “stupid pointless RNG bull****” reviews reveals playtimes anywhere from 45 minutes to 200+ hours, so it’s a mix of those players who quit after their first failure and those that put a lot of time in only to start hating it. 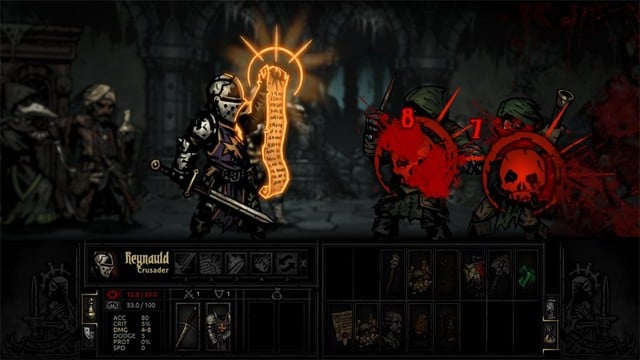 Whether Darkest Dungeon is such an emotional experience by design or by accident is a divisive question in the community, but it’s clear that it’s a large part of the game’s appeal. Watching the outpouring of rage and disapproval towards the developers as new features were implemented somewhat awkwardly before being fixed up and re-balanced makes me wonder if early access was indeed right for a game with this particular style of relationship with its players. Why strip back the layers and reveal the inner workings of something intended to be mysterious and intimidating? Maybe it’s best not to ask if the level of pain is working for us, and just keep hurting us.

While I’m certainly not suggesting that developers stop listening to player feedback, there has to be a certain caution in letting the voices that speak loudest define your community. As the conflict between the warring factions of preferred difficulty raged on, even the smallest change could be met with outpourings of anger as people interpret them as a concession to the other side. The debate fires keep burning, and the chance for a proper discussion of strategy and potential shortcomings to the game become drowned out.

In the end, it came down to a small compromise, with a few optional difficulty features added, turned on by default and considered the “intended” difficulty, but there is nothing by way of an actual difficulty selection. A bit of player choice in order to customize the experience, but not so much to run the risk of ruining the intended effect. Where the somewhat similar XCOM series is just as happy to let someone play on easy mode, reloading a save every time something goes poorly as it is to let them play an impossible mode ironman run, ultimately it came down to Redhook Studios deciding that too much variance in the difficulty level would compromise everything the game was meant to be. 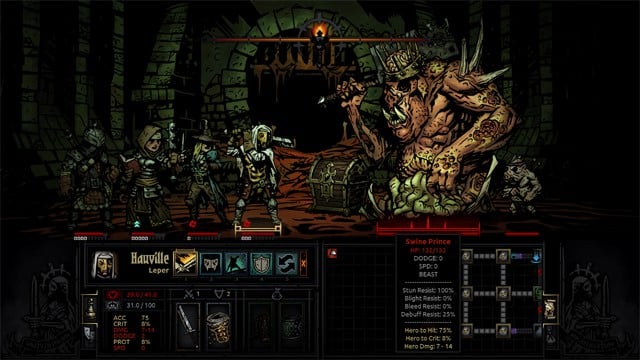 It’s a surprising conclusion to take after spending so long in open development, gathering so much player feedback, and absorbing the collective rage of gamers who just couldn’t handle their losses, but I have to commend them for their steadfastness at least. It’s a move that ended up alienating a number of very vocal players, but they just weren’t willing to compromise some key aspects of their vision. Personally, I think it’s for the best. If a developer ends up making changes to their own game they’re uncomfortable with just to satisfy more players, then they never should have let anyone play it before it was finished to begin with. Not everyone is happy, but at least I like to think we’ve all learned a little something about the potential pitfalls of letting in players early. Listening and collecting feedback are wonderful qualities in a developer, but in the end the game has to get made by the developers, not the community.

And if you don’t like it, there’s always modding. That mods already exist before official support, some making the game easier, some making it much more difficult, really does say a lot.