After taking a break from its fourth season main arc in last week’s “Sins of the Father,” Arrow returns with “Code of Silence,” which is among the lighter episodes of the series in terms of tone. Especially compared to its CW counterpart, The Flash, Arrow has exhibited a firmly dark take on the superhero genre, taking cues from a relatively recent trend in popular media. Still, the series has always been able to do comedy well when it wants to, and “Code of Silence,” while not strictly a comedic episode, is a breath of stress-free air in a season that has pivoted around more difficult material.

A lot of that comes from how the episode focuses on both Oliver’s campaign and the upcoming marriage of Oliver and Felicity. Even as the Demolition Team wreaks havoc in the background, the main concern of the episode is outlining personal stakes in life outside of the crime-fighting world. Coming along for the romantic ride is Donna Smoak and Quentin Lance’s developing relationship. Donna (Charlotte Ross) has become a quiet MVP for Arrow, stealing scenes from more established characters and winning the hearts of viewers. She is always a concerned, wonderful mother to Felicity, but she is also someone whose previous mistakes have made her into a source of wisdom, contrasting well with so many characters still trying to figure out meaning in their own lives. Her attitude towards the day-to-day is simple—basically, carpe diem—but its simplicity highlights how overly complicated people like Oliver make things for themselves. So, when Quentin is clearly lying to her, she doesn’t spend an extra moment on it before chastising him and making him earn her.

This is, like, C-plot stuff “Code of Silence,” but it really sticks out by virtue of Ross’ performance and how genuine Donna is as a character. She is incredibly understanding once she learns about why Quentin is keeping her at a distance, and she’s persuasive in convincing him that she’s going to be fine. Of course, that might not be the case, and the pending death of someone in the cast looms largely over the season, but Donna provides a natural comfort during all her scenes, and the writers have yet to treat her as helpless this season. 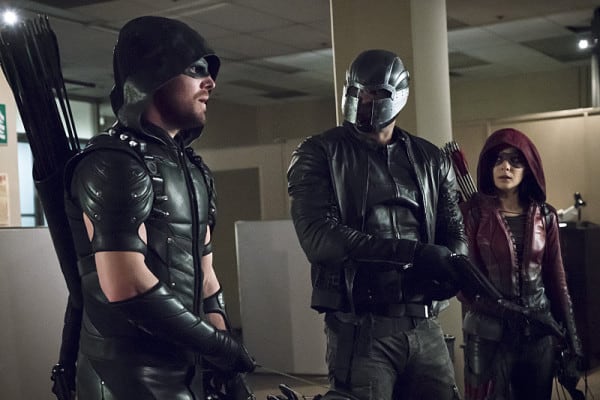 So, while that dynamic is going through ups and downs, other non-Green Arrow story is taking place in the form of the mayoral campaign. The script highlights how Oliver finds the whole thing kind of ridiculous in the wider context, but it does so with the benefit of joking rather than with cynicism. In fact, the campaign-related material is solid enough to the point that the episode’s largest flaw is not showing the debate between Oliver and Ruve. We just find out after the fact that Oliver did well and is likely on the fast track to being elected. That kind of missed opportunity is rather unfortunate in an episode that capitalizes well on the seemingly unimportant stuff going on around Arrow as it builds up to the showdown with Darhk.

Most of the rest of “Code of Silence” is action-oriented, and some of those scenes are important if just to remind viewers that Arrow still has a great choreography team. A lot of the action this season and last season has lacked the meaning and punch that the first two seasons established, partially because Ghosts are just too easy to face in combat (in an unrealistic way). So, when Speedy dives under a table, and the show follows her through the entire slide, there’s that lingering thought saying “Oh, yeah, this show is really good at fight scenes.” Thea (err, Holland’s stunt double) gets most of the juicy moves, swinging from wires and doing now-classic Speedy parkour. But all the encounters with the Demolition Team have little flourishes that show an attention to detail in the upper tier of television action.

And even though the episode concludes with Darhk bringing William into Star City, the real final touch of “Code of Silence” is Curtis giving Felicity a chip that has the capacity to help her walk again. On the one hand, viewers have a fair reason to consider this a cheap way out of Felicity’s disability. But consider the fact that Felicity was never going to remain in that wheelchair all series. Oliver even points this out directly by saying that people have come back from the dead in their world, so walking again is not going to be an issue. The other hand, then, gives a relatively underserved character a massive chance to shine as an integral part of what makes Team Arrow work. Curtis isn’t a true part of Team Arrow, but he’s been indirectly responsible for several of their successes, and the warmth of the entire sequence in which Felicity realizes what she is being given is enough to keep Curtis (along with Donna) in the list of supporting characters that the series uses sparsely but incredibly well.

A Quiver of Arrows: