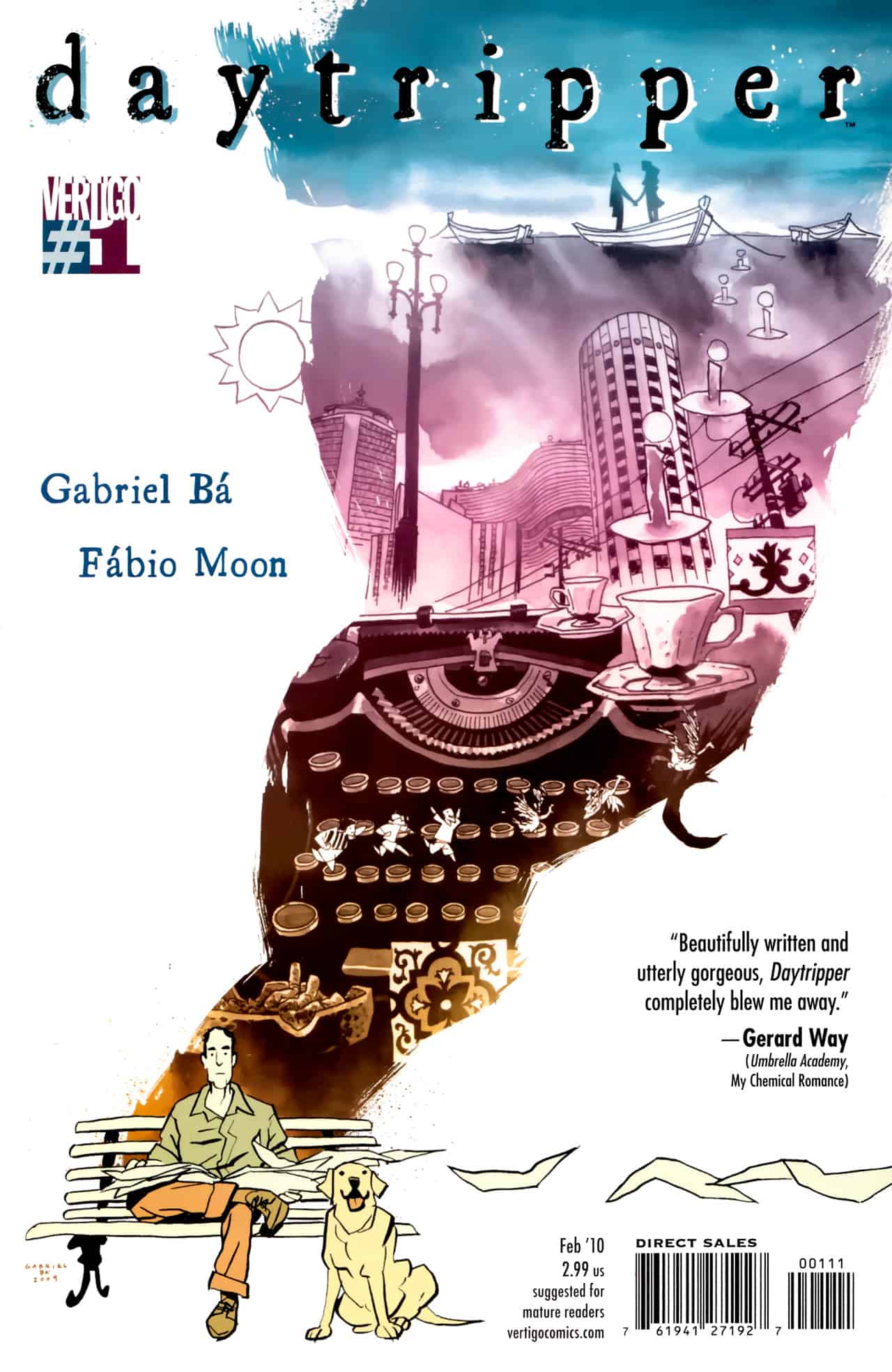 Let me preclude all this with an acknowledgement that there are absolutely incredibly superhero stories out there. Stories that can make you think and feel and push the boundaries of your thought. The argument I’m making here is not about “superhero equals low-brow or bad” and “indie equals progressive and good”. Frankly, the “indie” distinction has begun to lose a lot of meaning in comics, with it essentially now meaning you don’t have one of the two biggest brands in the world stamped on the front of your book. We’ve experienced a comics renaissance in the past decade or so that has revitalized the industry and improved the product across the board. But what I’m here to talk about is not any of that. I’m here to talk about one of my favorite stories in my favorite artistic medium. I’m here to talk about the fact that small, powerful, well-crafted stories, when told through the medium of comics, can move a man to tears.

One of the stark realities that we as comics fans face is that the entire genre has spent decades being stigmatized by the majority of the public. These are silly stories for children or bombastic melodrama, impossibly muscled men and women running around in brightly colored spandex. Every time I find myself having to explain my interest in comics to people, I begin to feel the looming fear of all the possible obnoxious questions and the potentially derisive attitude toward something that I truly love. Granted, this is not always the case, especially in recent times as comics, or at least the stories and characters that are generated by comics, are moving more into the mainstream. But even I felt this way at some point, since the only books I could really get my hands on growing up were the superhero books available at the nearby store.

When I left for college though, I met a few friends who also read, one of whom had a massive trade library that he let me borrow and read from at my leisure.  It was then that I started reading more “indie” books. I read books like Sandman and Preacher and absolutely loved them. Preacher, while great, still maintains a fair amount, if not more, of the violence and bombastic nature I spoke of earlier. Sandman, while an incredibly well written and thought provoking piece of literature, is still embroiled in the fantasy and wonder that many expect of comics. It even goes so far as to eventually introduce its characters into the DC multiverse, which makes that argument with your friends all that harder to win when you’re trying to convince them that this book is something different than the capes and tights they expect. But while both are great works of literature, with Sandman being one of my favorite books of all time, I don’t think I truly grasped the power of the comics medium until someone I was talking to on a comics forum recommended a mini-series about a guy who writes obituaries.

My immediate reaction was to laugh it off. This was in my junior year of college so I had been reading comics fairly regularly for the last few years, slowly incorporating more books outside the “Big Two” as I broadened my horizons. Eventually, my curiosity got the better of me. I had heard of Gabriel Bá from reading  Umbrella Academy, and the series had only released a few issues at that point so I took the chance and bought the first few issues of Daytripper by Fábio Moon and Gabriel Bá.

See also  How Much Do Movies and TV Shows Pay to Use People’s Houses in Movies?

Looking back on it now, this was probably a fairly significant turning point in my life when it came to comics. I was well aware of the power and malleability of the medium, but this was the first time I had really found something different. The twin brothers do an amazing job of grabbing your attention in a fairly unique way. They spend the first three panels of the first page giving you brief rundowns of the lives of three completely different people, and the last panel and blood-soaked second page to tell you exactly what this book is about for me: life, the connections we make during it, and what we then leave behind when we’re done.

In simple terms, Daytripper is the story of a young man, an aspiring writer, Brás de Oliva Domingos, who, while struggling to write his book, has chosen to pen people’s obituaries. Upon reading the first pages, one might expect this to be a book about a man learning life’s lessons from the deaths of others. But that would be too simple for our authors. No, you read through the first issue, entitled “32”, learning of Brás’ famous writer father, watching him struggle with his own writing, wandering through his life with the malaise of a young 30-year-old, who thought he would achieve more in life. As I was reading, I began to realize that this was not a book about some noir-type murder, or with some great secret mystery. I wasn’t reading Brubaker and Phillips. This was just a beautifully depicted day in the life of a man, who was clearly struggling with the demons we all begin to face at his age. Our past, our present, our future, and maybe most important of all, our legacy.

Then, just as I was beginning to connect with Brás, as I watched him struggle to enter a massive celebration being 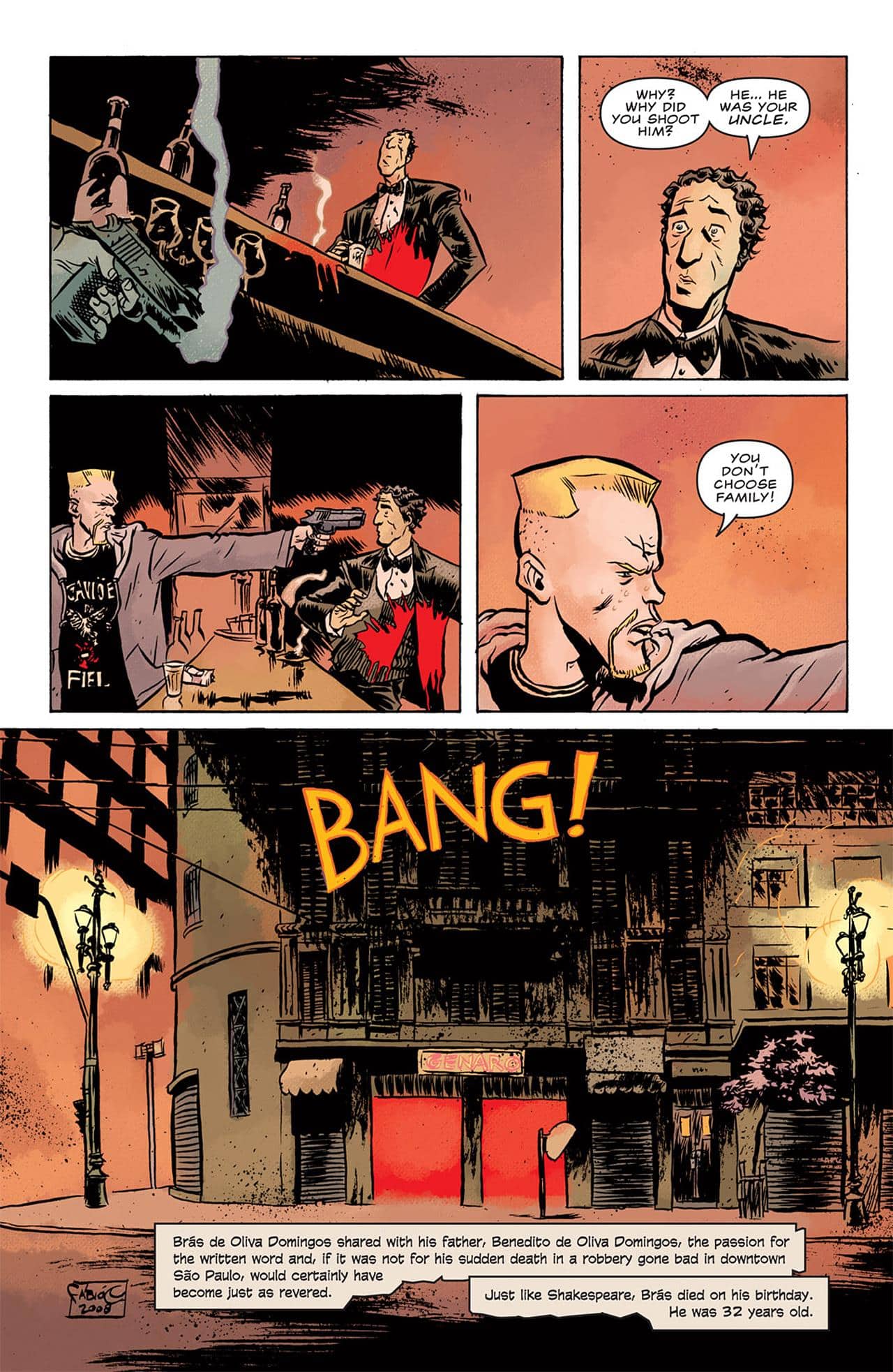 held for his father, this book took a sharp left turn. To avoid the celebration a little longer, Brás wanders into a nearby bar, sits down, and begins to speak with the bar’s owner. Then with little warning, the owner’s nephew barges into the bar, brandishing a gun, demanding money. As the bar owner pleads with his nephew to stop so he can help him, the young man, screaming back, lowers the barrel of his revolver and fires it into his uncle’s face. Brás barely manages to stammer out “Why? Why did you shoot him? He…he was your uncle.” The kid then aims his gun at Brás and says “You don’t choose family!” and promptly shoots our protagonist as well. We are left with a final red-tinged panel with a small obituary written along the bottom for Brás de Oliva Domingos, dead at 32 years old. This is the first issue of Daytripper.

“But, Wait!” you’re saying to me, “The main character dies at the end of the first issue?!” No, that is not what I am saying. I am saying he dies at the end of every issue, with each issue labeled with a different age, and containing a different essential piece of the human experience. His first love at 21 consumes him and pulls him into its depths. At 41,  he experiences the loss of his father and the birth of his son at the same time as his life refuses to give him time to breathe between moments of immense emotional gravity. At 11, he is a little boy, who had just had his first kiss, and had just begun to overcome his fears and begun to become the man he would be. Each time we meet Brás anew, we fall in love with him all over again and watch our new friend be torn from us and ripped from our lives without a thought given to how we feel about it. Because, as Bá and Moon begin to show us through their work, death is a cruel reality that we all must live with. It is both a beginning and an end to all our stories. But the moments we can experience in between are lightning bolts flaring across a dark sky, refusing to let it swallow their light. 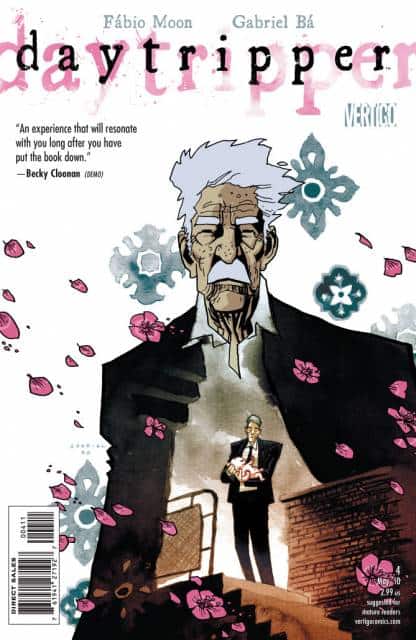 There are many beautiful stories over the course of the ten issues of Daytripper, but my favorite, and the most important to me for many reasons, is the final issue, “76”. We first see Brás’ miracle birth, surviving despite a blackout in the middle of his delivery. We then flash forward to the end of his life, at 76, where we learn that Brás has developed brain tumors. We see him decide against treatment, we see his aged wife, still very much in love with him. We see him sit and drink coffee with his full-grown son, discussing his own children, Brás’ grandchildren. This is a man who we have spent decades with, whom we know intimately from his own private thoughts. One whom we’ve seen play as a child, and whom we must not watch slip into nothing. We have seen him die nine times before, but each of those times was about someone cut down before their time. This was showing us the pain of watching someone whom you love dearly slowly slip out of your grasp. But when Brás’ son delivers him a letter written by his father before his passing, Bá and Moon’s message becomes far clearer.

The letter was written to Brás on the eve of his son’s birth, and explains to Brás how everything he has done up to this point is no longer for him. It is for his son, for his family, and for their future. And he must give it up to them so that at one point his son no longer needs him, because he has learned enough. Because one day, Brás won’t be there for him anymore. As the letter reads “Only when you accept that you’ll die can you let go…and make the best out of life.” Yes, of course we are all going to die. Brás himself dies many times over the course of the series. But if you cannot accept that fact, then how can you truly value any of the opportunities you’re afforded while you’re alive? Do not live in fear of death, embrace it, so that each moment you spend with those you love can be that much more powerful, that much more meaningful.

Daytripper is a story that I cannot do justice to, and must be read. I encourage everyone I meet with an interest in comics to read it, and have purchased it as a gift for many friends and family members. It is one of the first books I point to when I have that inevitable “comics are for kids” conversation I referred to at the beginning of the piece. This is a story that makes me weep every time I read it. It is the first comic that ever did so. It is a story about appreciating each moment for what it is, not what you want it to be or what you wish it could be. It is a story about family, both the family the choose and the family you make, and how their love can reshape your life. All we can do as readers is take its lessons and run. Because there’s a great romance out there waiting for you to live it.