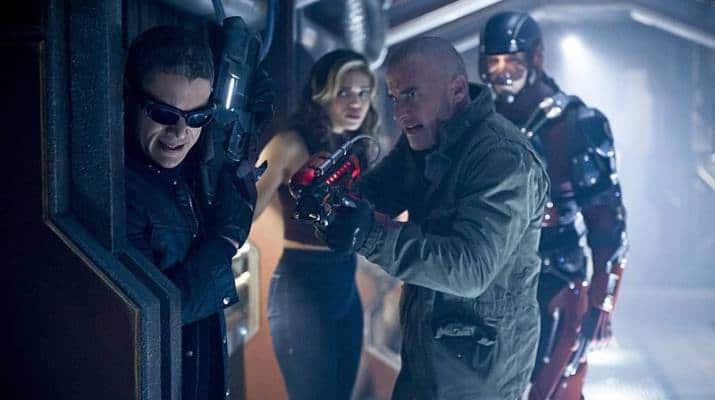 Sometimes, in the course of time, it becomes necessary for a TV show to showcase all of its worst aspects with determined abandon over the course of a single episode. Legends of Tomorrow, with almost amusing drive, accomplishes this in “River of Time.”

The episodes centers largely on three storylines. The captured Savage attempts to set the members of the crew against each other through conversations with various members; Ray, Kendra, and to some extent Carter have romantic conflict; and we are shown flashbacks to the Legends (except Mick and Rory) saying goodbye to their loved ones before joining the Legends crew.

Only a few episodes from the finale, Legends should be escalating in tension, yet despite the technically high stakes of this episode, delivery of events and conflicts is so poor that the writing and directing saps the plot of all energy. Worse, the episode revisits character conflicts that have been compellingly explored before – Kendra and Ray’s relationship and struggle with her genuine love for Ray versus Carter, the crew’s distrust of Rip and his morally ambiguous motivations  – but repeats all the prior notes and conversations.

Kendra, who has reacted largely with maturity and honest directness to difficulties in her relationship with Ray, in this episode bulldozes her way over their relationship, focusing entirely on Carter and openly talking to him like a lover. This of course antagonizes Ray, but their conversations are broad-strokes and their interactions are forced and off for these two, a rarity for the show in which their relationship is generally one of the more thoughtful and successful elements.

Ray, in particular, responds with childlike rage, very much unlike himself.  The worst writing of the episode is showcased when he – a brilliant, sophisticated man with by this time a great deal of worldly experience – lets himself be goaded by Savage’s 5th-grade taunts that he’s not man enough to fight him directly, and opens the door to Savage’s cell. It’s wildly unbelievable on every level, but particularly a purely character level. Savage’s taunts of Sara and Professor Stein are equally one-note and childish, and serve to yet again strikingly undermine him as the character the show keeps attempting to sell us on: that of a brilliant, immortal mastermind who embodies pure evil and sophisticated villainry. Savage is a cartoonish, consistently underwhelming villain, and the writing of his character betrays a consistent lack of imagination on the part of the showrunners. 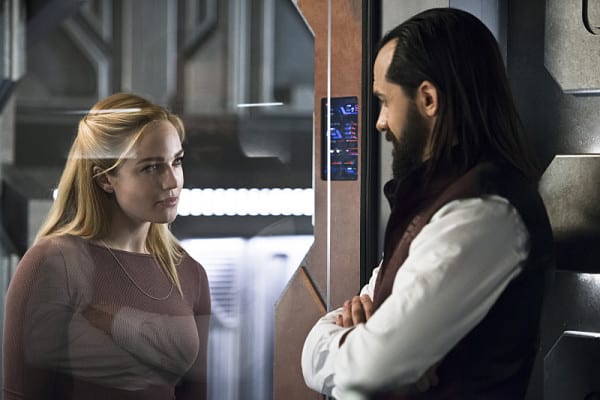 One minor strong point of the episode was the setup of new avenues for Sara to shine: she steps up not just as the outspoken voice of the crew to Rip, but also a daring pilot for the Waverider. It was refreshing not just to see a new facet of her personality,  but also the acknowledgement given to her by Rip when he describes her as the person on the crew best suites to make hard choices in high-stakes situations.

Ray and Kendra’s final scene – their breakup – returns to the emotional nuance and depth of their interactions in other, recent episodes, and it’s perhaps the only emotionally effecting moment in the episode. Yet, their romantic histrionics are getting repetitive, and if they were to break up so unceremoniously, why did the show put us through such an extended rollercoaster and devote such screentime to them?

The “climax” of the episode – well. Real quick: you have a brain? Then you were able to predict the “twist” in which the Time Masters choose to align themselves (to some extent at least) with Savage, in a twist which Absolutely Everybody saw coming. We feel your pain at this turn of events, Rip. Or we would, if you were a character we manage to care about at all, which so far hasn’t happened.

It’s an effective plot device to have the two central forces who are antagonistic to our heroes (Savage and the Time Masters) team up, or at least prove to be on the same side, but it’s not worthy of delivery as a huge twist. Furthermore, the episode yet again breaks massive time rules and introduces, ignoring all previous realities, entirely new realities. Carter inexplicably needs to stay on the ship and be saved despite other versions of him being readily available to the Legends at thousands, if not millions of points in time (seriously: kill Savage, and let this version of him die!! He reincarnates, for God’s sake). Savage is also a time traveler (Rip didn’t….notice that? In all of his jumping through time following Savage?).

The episode ends on a cliffhanger, with the team either locked up or, intriguingly, apparently in hiding (Sara and Leonard, who are BY FAR the most interesting pair on the ship and need a spinoff ala Hunter and Bobbi from Agents of S.H.I.E.L.D). The next episode needs to do some serious work to set the show on path for a strong finale that wraps up at least the never-ending question of Rip’s family, even if Savage continues to be the villain next season.