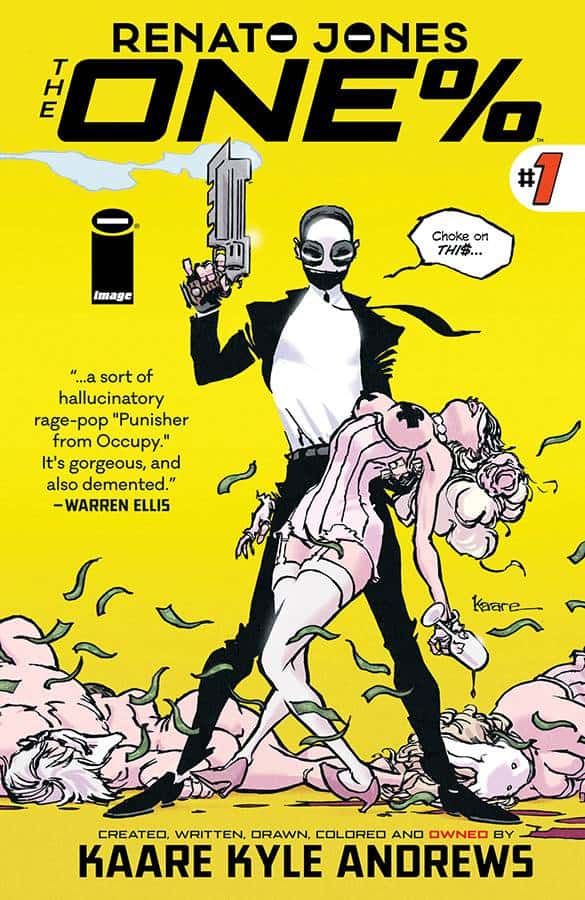 Renato Jones: The One% #1
Written and Drawn by Kaare Kyle Andrews
Published by Image Comics
Released May 5th, 2016

Just like Bernie Sanders, Renato Jones: The One% #1, written and drawn by Kaare Kyle Andrews, clearly exists in a post-Occupy America. The level of disdain for the super-rich is palpable in these pages. The result is something considerably less than academic, rather a sort of weird, angsty and angry action romp filled with graphic violence and sadism. It’s a cathartic comic with a familiar yet still interesting protagonist that anchors the zany, relentless and often disturbing thrills.

This first issue is double-sized, a common occurrence for Image releases, and it gets a lot done; by the end, readers get an expository origin story as well as a clear first chapter.

The protagonist is a little bit of Batman and a little bit of Dexter. Motivated by the death of his parents, Jones fatally preys upon horrible people in really ugly fashion. The most interesting facet of the character makes him unique among the many easy comparisons, that being his role as an insider. Jones comes from obscene wealth himself, and that experience gave him the exposure to greed necessary for his violent motivations. When he doesn’t have the mask on, he is living the life of the super-rich as a sort of disguise. Batman does that too, but with Jones, there’s an added layer of value to his character because of it.

The art here is great. It’s similar to Wes Craig’s work on Deadly Class, offering loads of twisted characters with exaggerated expressions. It’s cartoony and also a touch disturbing, which fits the book wonderfully. At one point, the book radically changes its art style for a particular moment in the story; this is a bold move that works fantastically. I’m not going to spoil it, but there are also some fourth-wall-breaking gags strewn throughout that are cute and clever.

Renato Jones is unique enough to stand apart from its influences as its own beast. While not as scholarly as its subject matter could make it, there’s a lot of depth to these pages. The art is dripping with style and the plot is filled with excitement. This is sure to be another great read, month-to-month in the already stellar Image Comics line-up.