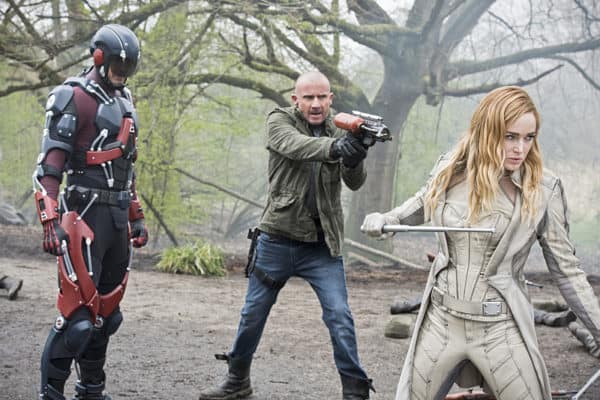 DC’s Legends of Tomorrow ends its first season on a deft, compelling cliffhanger that opens a number of possibilities. The finale itself, as per usual for the show, does a few things well and almost everything else poorly. The primary thing it does do well is jettison the three weakest characters (whom I have been vocally requesting killed off for most of the show’s run), namely: Savage, Kendra, and Carter.

Yet even that comes with a caveat, because after an initial mishandling of Kendra’s character early in the season from the writers, and uncomfortable acting from Ciara Renee, the show gradually but very thoroughly turned Kendra around and made her a well-rounded, interesting, sweet and empowered character, and Ciara settled into this and made the character her own. It’s a bizarre choice to center so much character growth and screentime on Kendra, only to write her off the show at the end of the first season. Surely that time would have been better invested developing Rip, or Ray, or particularly Jax, as a character, the last of whom is still largely paint-by-numbers. And after all this, she (and Carter, a footnote), are given a perfunctory, two-minute goodbye scene with the team she’s fought and bled beside, and disappear off the show. There are uneasy echoes to the unceremonious writing off of major PoC characters from other shows in recent months, in particular Nicole Beharie from Sleepy Hollow and Ricky Whittle from The 100.

The strongest scenes in this episode belong to Sara and her father – Paul Blackthorne as Detective Lance has always been one of Arrow’s resident scenery-chewers, and the two together deliver every bit of impact out of the grief and intense emotion they feel at Laurel’s death. Rip very briefly shines as a Captain/leader when he fiercely tells Sara she’s one of the strongest people he’s ever known and she will get through this, spurring her back to action. (This may also hint at a future romance between the characters in season 2).

The stakes are appreciably high in the episode, and for once don’t have to do with vaguely-elaborated time hijinks, but with a real, physical threat that audiences are familiar with – a weapon that will destroy the world when it explodes (or three of them). And the concept of three timezones effectively works to separate, and utilize, all team members. The action sequences as always are explosive and convincing, and Sara’s in particular is crisp, pure delight to watch as she takes down Savage. 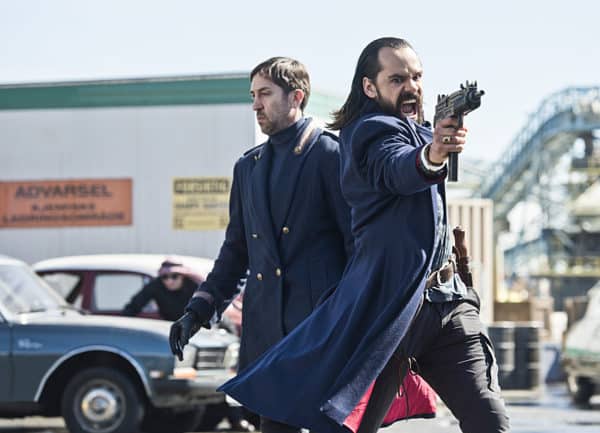 Having said that, the underlying mechanics of the episode’s plot resemble something a five year-old and your half-drunk uncle cobbled together in a garage with a hoot and a wink, not realizing this is necessary to drive the whole machine, and that not all the good acting and charm in the world can make a TV show perform without the well-oiled engine of a good plot. Legends has stellar action sequences and special effects, a compelling premise, and successful character-writing for its talented actors 50% of the time. These elements, and our willingness to buy into the universe having been predisposed toward it by its better sister shows (Arrow and The Flash), have made the show successful enough to bargain a second season. But it is good? No. And unless it can radically and rapidly fix some of its weaknesses (jettisoning Savage was a major step forward, but there’s no way to undo the severe miscasting of Arthur Darvill as Rip, as an example of one of the show’s several embedded problems), it will likely steadily lose audience over its second season.

The closing moments do offer hope. The latter half of the season was on the whole singularly stronger than the first half, with some well-developed arcs around Ray/Kendra and Leonard/Mick, and a superb villain in gone-too-soon the Pilgrim. The betrayal by the Time Masters, reveal and subsequent destruction of the Oculus, and destruction of Vandal Savage, have efficiently reordered the Legends’ universe and much of its rules, and this necessary change gives the show much more freedom in its second season.

The finale ends with another Waverider and the appearance of Rex Tyler (played by Suits’ Patrick J. Adams) as the DC hero Hourman. Tyler warns the team they’ll die if they go off on their Waverider, and names himself a member of the Justice Society of America, a mention that will gets any comic book fan excited as the JSA is a precursor to the Justice League. The swashbuckling arrival of the immediately charismatic and mysterious Tyler ends the season on a very strong note, and offers a hint of organizational structure and the path the team might take in next season.