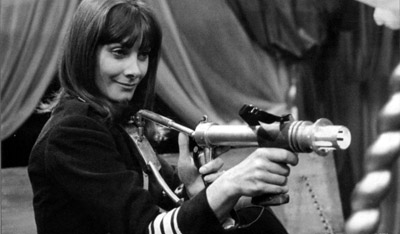 Background: Sara Kingdom is the dedicated, powerful, top agent for the Space Security Service, working under the traitorous Gaurdian of the Solar System Mavic Chen, when she meets the Doctor. Initially an antagonist, Sara discovers Chen’s treachery and switches allegiances, working with the Doctor to bring down him and his allies, the Daleks.

Family/Friends: Sara has a brother, Bret Vyon (played by Nicholas Courtney of Brigadier fame), who discovers Chen’s plot before she does and goes rogue. Tasked with hunting him down, Sara stays firm to her orders and kills him, and this decision eats away at her, causing her to more easily see Chen for what he is and team up with the Doctor.

Personality: Sara is disciplined, driven, and unshakingly loyal. She’s a soldier and apt to follow orders, though once she starts to question her choices, these habits break down quickly. She is in peak physical condition and is incredibly intelligent, though her stubbornness and loyalty cloud her judgment at first. Sara is deeply affected by her killing of Bret and this moment sparks something in her, bringing her more in touch with her humanity while also, if possible, making her even more focused and determined to take down Chen.

Highlights: Her character design is fantastic. Sara is fully realized from the moment she steps on screen and she makes a strong impression almost immediately. It’s weird to put this as a highlight, but Sara’s death is one of the most terrible (and effective) in the show’s run, as she ages to death from a young woman to all but bones in a matter of moments in front of fellow TARDIS teammate Steven. Steven is hugely affected by this, and after seemingly losing another friend in The St. Bartholomew’s Day Massacre, he goes off on the Doctor, blaming him for his Companions’ deaths.

Lowlights: As previously mentioned, horrific death scene. Yes it’s powerful, but it’s also a real shame Sara never got the chance to officially become a Companion (though there are plenty who dispute this).

[re: her brother] “Yes, he’s dead. The others must be killed as well. They will be shot on sight but aim for the head.”  The Daleks’ Master Plan

Other notes: Sara is the single ally most commonly regarded as a Companion. She has a distinct, substantial arc over her episodes, she fills the role of a Companion, alongside Steven, and she travels in the TARDIS as the Doctor devises his plan to defeat the Daleks and Chen. However she is only in one story, albeit a long one, and she never joins the TARDIS as the Doctor’s traveling companion, instead coming on as a soldier. Sara is played by the fantastic Jean Marsh, who previously played Richard the Lionheart’s sister Joanna and who would return during the Seventh Doctor’s tenure to play Morgaine. Though further adventures with Sara exist in the extended cannon, she is only in one story of the TV series, making her an ally rather than a Companion.