Home
Entertainment
Doctor Who, Ep. 8.10, “In the Forest of the Night” half-bakes an interesting idea
Prev Article Next Article 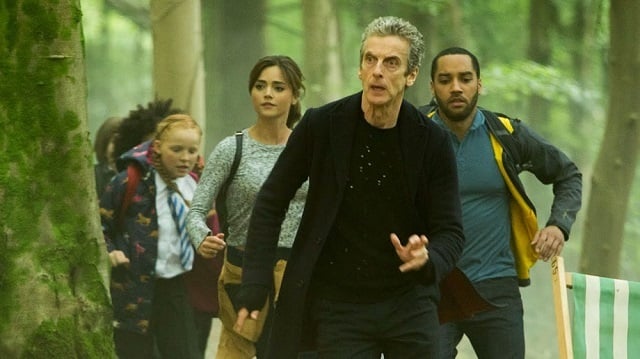 Doctor Who, Season 8, Episode 10, “In the Forest of the Night”
Written by Frank Cottrell-Boyce
Directed by Sheree Folkson
Airs Saturdays at 9pm ET on BBC America

This week, on Doctor Who: A magical forest takes over the world, Danny is awesome, and the Doctor doesn’t believe in meds

“In the Forest of the Night” is beautiful to look at. Director Sheree Folkson does a good job in the forest as well as on the TARDIS, with the child’s POV shots of the Doctor’s lecture a particular treat, and the cinematography form Mark Garrett is lovely, especially as Maebh leads the group to a glowing light among the trees. The basic idea of the episode is an intriguing one: What if the Doctor got swept up in a class field trip? It’s great to see children on the TARDIS once more, however briefly, and Clara and Danny’s group stay safely on the right side of the Courtney Wells—Angie Maitland spectrum. Peter Capaldi and Jenna Coleman are strong once again in the lead roles, Samuel Anderson continues his good work as Danny Pink and happily, Clara’s lying to her boyfriend is addressed far quicker than expected.

Unfortunately, beyond this, the episode falls apart. The entire city of London is overrun with trees, but nobody’s around. No one is exploring the wood or forced out of their homes by misplaced, if well-intentioned, maples and birches. Of the entire group of school children, only one has a parent concerned about their safety and location. Not only do trees save the day before conveniently disappearing into, what, sometimes-invisible/sometimes-glowy blobs? But they’ve done this twice before and there’s no evidence, and no one remembers. No one thought to jot down a note of entire towns being overrun by vegetation overnight.

Writer Frank Cottrell-Boyce taps into childhood fears of dark and scary woods, the kind that are so prevalent in fairy tales. Unfortunately for him, playing the Universal Childhood Fear card doesn’t work, because showrunner Steven Moffat already did so in “Listen”— even Doctor Who only gets one “mankind’s nightmare” per season. Then there’s the climax, when Clara and the Doctor decide to take a disembodied voice’s word for it and give up. Will Clara think of the children, as Danny has been encouraging her to do all episode? Yes, she says. They’ll miss their families and have to start over, so it’s not worth saving their lives. Or Danny’s. Or Clara’s. Better to die than struggle to survive a horrible trauma.

That’s the only time the episode devalues the long road to recovery. One child in the group has already faced a trauma, her sister running away from home, and she’s started hearing voices. But no, this isn’t an unfortunate side effect of her pain, it’s magical lights—Maebh’s mom was wrong to medicate away the voices in her daughter’s head. That’s right, this episode actually has the Doctor come down against antipsychotics. And of course, “fixing” Maebh isn’t enough (though why does the Doctor creating a gravity field stop the voices in Maebh’s head anyways?), her sister pops back home at the end, instigating disturbance tidily resolved. One of the best touches of “The Crimson Horror” was that in the end, Ada wasn’t cured of her blindness. The Doctor exposed her mother for the kook she was, but he didn’t fix everything in Ada’s life. She was a fine example of a victim regaining her agency and finding the strength to move on with her life. This episode presents a young girl with significant problems and instead of demonstrating her merit in spite of them or having her finally address and work through some of her pain, Maebh becomes yet another puzzle for the Doctor to solve.

The best moments in the episode are the small ones: Danny calmly calling Clara on her lies and explaining how he can turn down the stars (basically, everything Danny), the children playing with the TARDIS controls (much to the Doctor’s chagrin), Clara appreciating the progress a student can make, with the right teacher. As has been the case all season, there’s a lot here to like. This time, however, there’s more to be disappointed by.