Don’t Worry About Me

British actor David Morrissey has had his share of highs and lows. With starring roles in acclaimed TV series like Holding On, State of Play and Blackpool, he had Doctor Who fans talking up his chances of replacing David Tennant in the iconic role that eventually went to Matt Smith.  On the downside, there was the appalling Basic Instinct 2 (2006), in which Morrissey’s cringeworthy sex scenes with Sharon Stone made me wish I could sign up for an Eternal Sunshine-style memory wipe. 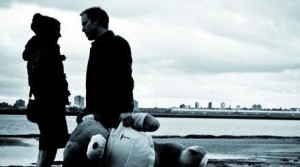 But it looks as though his days of playing the patsy to a homicidal nymphomaniac are well behind him. Morrissey’s feature debut as a director was made by his own production company, Tubedale Films, for around £100,000 and was shown at last year’s London Film Festival. It’s a low-key, but utterly believable portrait of a brief relationship between two young people that unfolds over the course of a day and a night.

Don’t Worry About Me began life as a play, “The Pool,” written and performed by James Brough and Helen Elizabeth at the Edinburgh Fringe in 2006. For Elizabeth it was a case of “If you can’t get in somebody else’s play, you should write your own.” For Morrissey, it was the perfect material to showcase his home town of Liverpool as a shooting location for independent movies. His handling of the lead actors (both film novices), use of locations and subtle choice of music make this a highly impressive debut.

David (James Brough) and businesswoman Karen (Kate Henry) part after a series of energetic couplings in a central London hotel. She leaves to catch her train back to Liverpool – presumably not expecting to clap eyes on her casual pick-up again. But in her haste, she’s left behind an important-looking document. David finds it and, in the film’s one implausible moment, decides to bunk off work and deliver it to her in person that afternoon. But his mission ends in failure: it turns out that the brassy Karen has a habit of “playing away” on business trips. David escapes from an office melee involving her aggressively jealous boyfriend only to end up drunk and unconscious in the street after being mugged. If this was a Sandra Bullock movie, I’d probably be expecting the worst.

Enter the film’s real Good Samaritan Tina (Helen Elizabeth), who co-wrote the screenplay with Brough and Morrissey. She’s a betting shop employee who takes pity on the virtually penniless David and offers him a chance win his return fare to London. They then embark on a whirlwind tour of the city that takes in a bus ride, a ferry trip and some heart-rending scenes on Crosby beach among Antony Gormley’s cast-iron sculptures, Another Place. If you want a sense of the film’s bleakness, beauty and ability to suggest isolation, look at some photos of Gormley’s extraordinary installation. (http://www.visitliverpool.com/site/the-another-place-figures-antony-gormley-p160981)

I won’t give away too much more about the plot, or what this impromptu sightseeing trip reveals about the inner lives of these two characters. The brilliance of the screenplay lies in the seemingly casual conversations that draw out their attitudes towards family, work and sex.

Towards the end there’s a key scene – both comic and disturbing – in which a distraught David mercilessly beats up the giant teddy bear he’s been carrying around the beach. Stupidly, I found myself worrying about what would become of this kapok-filled soft toy. Then, as the strains of Fairport Convention’s “Who Knows Where the Time Goes” are heard over the closing moments, I realized that what I really wanted to know was what would become of David and Tina.

(NOTE: THIS FILM IS CURRENTLY AVAILABLE ON REGION 2 DVD ONLY)