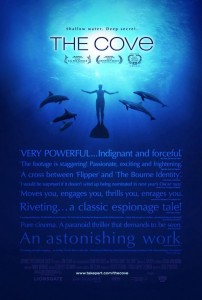 Winner of the best documentary at this years Academy Awards, The Cove is an astounding piece of investigative journalism that plays out like a heist movie. It is overwhelming, compelling and will set your heart racing, while never overshadowing its message. Documentaries don’t get more compelling than this.

Listen to our podcast review from episode #149 With XXY, Argentinean writer-director Lucía Puenzo delivers an engrossing film about a 15-year-old intersex youth who struggles with both her masculine and feminine identities. A beautifully made, superbly acted drama and one of the most original coming-of-age films you’ll ever see. XXY delivers a passionate message about acceptance while exploring the dilemma of having to choose between being a man or a woman, or simply being yourself

Listen to our podcast review from episode #75 Not since Edward Scissorhands has Tim Burton given his imagination such free rein, and by combining his visual wizardry and his ability to tell a larger than life story, Big Fish is perhaps his best film. Enriching, heartwarming, funny, touching, breathtaking and a perfect marriage of story and director. Like all self-respecting zombie flicks, Shaun of the Dead has that most vital ingredient, an underlying layer of social commentary. But if that’s not enough director Edgar Write manages to mix a bit of genuine romance, ridiculous gore, riotous comedy, and somber drama, making it the funniest film found on this list. For lovers of Evil Dead II and Dead Alive, Shaun Of The Dead is an instant cult classic.

Listen to our podcast review from episode #159 On the heels of her critically acclaimed Old Joy, Kelly Reichardt delivers another deeply resonant portrait of a dying America with Wendy And Lucy. If you’ve ever lost your dog, or found yourself in a financial crisis, Wendy And Lucy is the sort of film that will break your heart. Thanks to an extraordinary performance from Michelle Williams and an exceptionally deft hand from her director, Wendy And Lucy reflects the human condition with no apparent effort at all.

Listen to our podcast review from episode #128 Jonathan Caouette has been documenting his life since he was eleven years old. With Tarnation, he weaves a psychedelic whirlwind of snapshots, Super-8 home movies, answering machine messages, video diaries, early short films, snippets of 80s pop culture and dramatic reenactments to create an epic portrait of an American family torn apart by dysfunction and reunited through the power of love. As a first-time experimental filmmaker, Caouette artfully displays remarkable directing and editing skills. Tarnation is the equivalent of a cinematic journal or diary. Not a perfect film and some scenes work better than others, but the finished product is a work of art. Magnolia is in many ways is groundbreaking and innovative story telling. An absolutely mesmerizing piece of filmmaking with some fine acting (including Tom Cruise in the best work of his career) that makes holding our interest for three-plus hours seem easy.

Listen to our review from podcast #16– This Is England, the semi-autobiographical tale of writer/director Shaun Meadows, turns back the clock a quarter century and examines a bullied boy who falls under the influence of a gang of skinheads in the early ’80s. A surprisingly, sweet, nostalgic coming-of-age period piece in the tradition of mean-streets. This Is England features superb performances and an infectious musical soundtrack. One of the simplest and best re-creations of the gritty post-punk scene from England ever put on screen.