Home
Entertainment
Sleeping through the apocolypse is easy in ‘Earth 2: World’s End’ #9
Prev Article Next Article 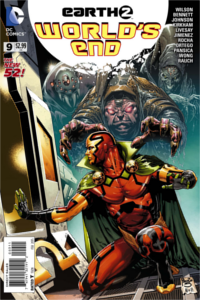 It’s time to do the regular ‘Earth 2: World’s End’ analysis again and unfortunately, not much has changed. The series continues to suffer from the overwhelming art team and terribly unengaging storylines. One thing of note is the addition to the art team, Scott McDaniel, who takes on the duty of panel breakdowns. However, what change he was to have brought is nigh invisible, save for some slightly better set up pages.

This week, the story involves the primal forces of the Earth seeking out their new avatars. After nearly deserting Solomon Grundy and Sam Zhao to hold off the falling fragments of the moon, Alan Scott returns to battle the Furies of Apokolips. However, they have a new problem as the ancient avatar of the Blue, the Lovecraftian monster that Queen Marella has released, bursts from the ocean floor to begin a tidal wave of death and destruction. In Chicago, Constantine and his new posse of rogue magic users run into the Graysons. Whatever he and his friends have been doing in between issues is never explained nor hinted add. There’s not even an editor’s note to explain things. They’re just suddenly in a completely different city from last issue. On the other hand, Dick and Barbara Grayson have been hanging around this series, even getting their own issue of the ‘Earth 2’ main book dedicated to them, and it seems only now has their storyline be kicked off. Of course, given how easy it is to skip the Earth 2 tie-in, what new developments this issue holds might be irrelevant all the same. The redeeming Ted Grant is completely absent. There’s more of the Superman/Batman team running around Desaad’s laboratories as they’ve been doing for a while. All it does is end with a big reveal that reads more like a red herring. Though if played straight, it would read more like an insult to what most of Earth 2 has been built upon and ruin the excellent set up the series started out as.

Once again, the art is less hit than miss. The scenes with Flash and Hawkgirl or the Graysons are the by far the weakest parts once again.  The best scenes involve the World Army’s assault on Apokolips. They stand out amongst the mediocre pages. It’s impressive what some crisp inks and decent alien designs can do.  They’re a miracle amongst pages ranging from decent to dreadful.

This issue lacks anything to make it stand out from last week. The same problems persist, a slow plot and in desperate for a better art team. At this point, the ‘Futures End’ team was miles ahead in their story without the aid of tie ins. Yet here, one could have skipped last issue and not really have missed anything of importance, the very definition of forgetable.