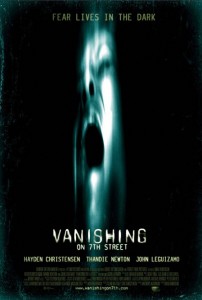 Brad Anderson has been on of the most underappreciated American film directors in the past ten years. His films have varied from Sundance Film Festival audience favorites Next Stop Wonderland and Happy Accidents to darker themed movies such as Session 9 and The Machinist. His last film, Transsiberian flew under everyone’s radar. The thriller starring Woody Harrelson, Emily Mortimer, and Ben Kingsley received mostly positive reviews (It has a 90 percent “fresh” rating at Rotten Tomatoes) and Roger Ebert praised the film for it’s “true fear and suspense”. However according to Box Office Mojo, it only grossed $2,206,405 in the United States and $5,624,492 worldwide.

Well Anderson his back with his latest project, Vanishing on 7th Street – a post-apocalyptic Horror-thriller starring Thandie Newton, Hayden Christensen and John Leguizamo in the leads. The plot follows a mysterious, seemingly global blackout which causes countless populations to simply vanish, leaving only their clothes and possessions behind. A small handful of survivors band together in a dimly-lit tavern on 7th Street, struggling to combat the apocalyptic horror. Realizing they may in fact be the last people on earth, the darkness hones in on them alone. Not much is known about the movie but Beyond Hollywood recently posted this electronic press release.