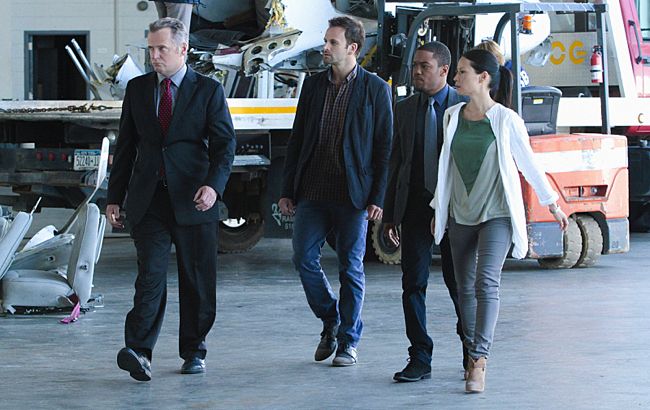 After a Watson-centric episode last week, we finally have an episode that is (more of less) about Sherlock, as we learn more about his background, courtesy of his partner/sober companion’s persistent nature.

“Flight Risk“ investigates a supposed plane crash, which immediately captures Sherlock’s undivided attention.  This effectively distracts him from Watson’s constant reminders about having dinner with his father, leading to a slight and overdue glimpse into Sherlock’s past.

It’s no secret that Elementary‘s Sherlock Holmes is like a closed book – hints have come about regarding his past but nothing concrete and furthermore, it is almost like that there is nothing more to this guy that a crime-solving consultant with a funny name.  It takes a complex case like this (sand, glue and misconstrued telephone calls?  Yes, it is that complex) and a mention of a certain name for Sherlock to bring his shields down.  Thank goodness too – up until now, Miller has only brought smugness and even arrogance to his character.  However, by leaking a small insight into Sherlock’s past into the storyline, whether it is from his awkwardness about planes to his disappointing father and that person, it allows him to grab the opportunity with both hands – opening us to another dimension to the already multi-faceted Mr. Holmes: the emotional, even sentimental, side.

Liu continues to be a strong partner alongside Miller – Watson’s insistence in getting to know her partner leads her to an awkward interaction, which eventually paves the way to more.  The main core of this episode is the developing relationship between the two protagonists and the contrasting level of trust they share (“You should have trusted me”; “Thanks to you, we’re still nothing more than strangers”).  Her interactions with Sherlock’s old friend Alistair are welcome, as they shed light on what seems to be a big piece of character history that can make or break CBS’s take on Sherlock Holmes.

Writer Brinkerhoff brings in certain different story elements that Sherlock Holmes fans have been waiting for, as they effectively tie in Elementary with Arthur Conan Doyle and it is this connection that has been eagerly-anticipated since the show was granted its first full season.  Director Platt weaves in the typical cop drama with interestingly different environmental elements into this episode, making it more than a simple murder mystery.

It has taken over seven weeks for Elementary to come out of the shadows and establish itself as a proper crime drama but like a fine cheese or wine, it improves with age.  As the drama nears the end of its first season, it’s hard not to wonder what will come next…and will we meet Ms Irene Adler?