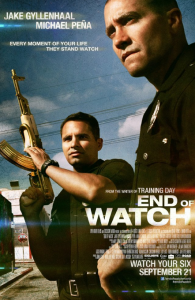 Although End of Watch doesn’t have a theme song per se, one can’t help but apply a familiar tune to underscore its proceedings. Something along the lines of, “Bad boys bad boys, watcha gonna do? Whatcha gonna do when Jake Gyllenhaal and Michael Peña come for you?”

With the found footage narrative on its last legs (despite the momentary but minor reprieve that was Chronicle), it’s only logical for David Ayer to do what everybody else does when a genre is on the verge of extinction; pay homage. In this case, his movie offers reverence to the world’s first big hand-held hit, perhaps the most popular ever. We are, of course, referring to the TV show Cops.

In End of Watch, writer/director David Ayer (who also wrote Training Day) demonstrates that he is indeed a fairly decent screenwriter. His directorial prowess, on the other hand, is not as finely proved. Shot in first-person shaky cam, but not exclusively, the movie is a frenetic, high-octane piece of hyperbole that hits hard, but not often enough.

On the portentous streets of south central Los Angeles, two patrol officers, Taylor and Zavala (Jake Gyllenhaal and Michael Peña), roam the veritable wasteland with a palpable sense of machismo, bravado, and any other Latin-sounding word that means ‘swagger’ (braggadocio?).

Armed with a standard issue Beretta, pepper spray, and Taylor’s personal HD camera, the two embark on a crusade to rid the city of the three nefarious food groups – drugs, weapons and illicit money.

With an unbreakable resolve and finely tuned teamwork, the two best friends become darlings of the LAPD, lapping up all the arrests, acclaim, and accolades. However, they are marked for death when, in their typically obsequious approach to justice, they accidently encroach into the business of a dangerous drug cartel. 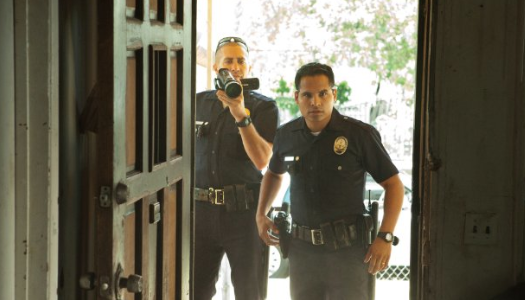 Along with candid heart-to-hearts about family and work, the two will also engage in bellicose banter and piss-taking, and despite the occasional line of clichéd dialogue (“you’re my best friend”, “I’ll take care of your family if anything happens to you”, “you and I are brothers”), the conversations between Taylor and Zavala are extremely lifelike and grounded in reality.

However, as well fleshed out and likeable as the protagonists are, Mr. Ayer is excessive and unbridled in his attempt to portray them as heroes, to be too infallible. The movie can feel incredibly episodic at times (to be specific, an episode of Cops), pulling focus away from the story.

For example, there’s this one scene in the film where Taylor and Zavala run into a burning house to save a family trapped inside. Sure, it’s brave and heroic, earning them both a Medal of Valor, but how is it relevant to the plot? How does it tie into their antagonism with the cartel?

There’s another scene where they get called in on a missing child case. Why is this apropos?

Scenes like the aforementioned function as a way to make us like the characters even more, but because they are superfluous at best, redundant at worst, it hampers the flow and development of the main story at hand. 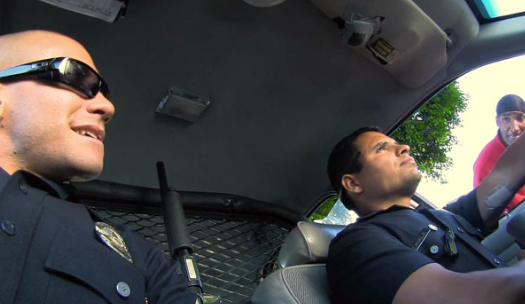 As a synecdoche for the plot as a whole, the bombastic and slightly-stereotypical antagonists will disappear for long stretches of time. They do appear in fleeting segments, but it takes until the movie’s hectic final 30 minutes before everything really comes together. As a result, the story behind End of Watch is not as developed and realistic as its human elements, making the entire movie uneven and, at times, hard to believe.

To compound the already gimcrack narrative, the powers-at-be, for whatever reason, decided to tell it in a first-person/found footage style. Along with Taylor’s camcorder, Mr. Ayer introduces a wide array of creative techniques to immerse you in the Cop-like experience (hidden and dashboard cameras), but, like in Chronicle, they ultimately end up as nothing more than a gimmick.

They are in no way integral to the storytelling and the movie itself doesn’t always adhere to this device (there are a couple of sweeping aerial shots of LA and a love scene between Mr. Gyllenhaal and Anna Kendrick that has a deeper implication if it was indeed filmed by camcorder).

Aside from a couple of director watermarks (cop story, AK-47 maelstrom), End of Watch plays out as a rather generic smorgasbord of recent movies. The aesthetic and jingoism evokes Act of Valor, the buddy cop bromance is similar to 21 Jump Street, and the movie’s heavy-handed attempt at drug war moralizing feels like it came straight out of Savages.

There are a few instances where the movie will hit you with high-impact rounds of extravagant action, but the timeworn nature of the story and its subservient status to excess character development makes End of Watch a serviceable action film that never rises above the call of duty. 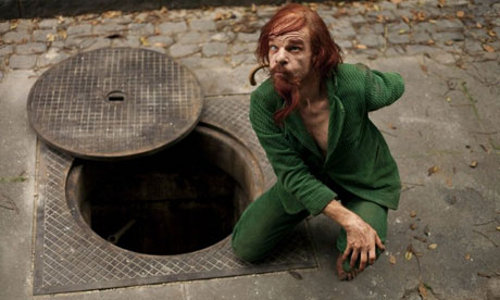