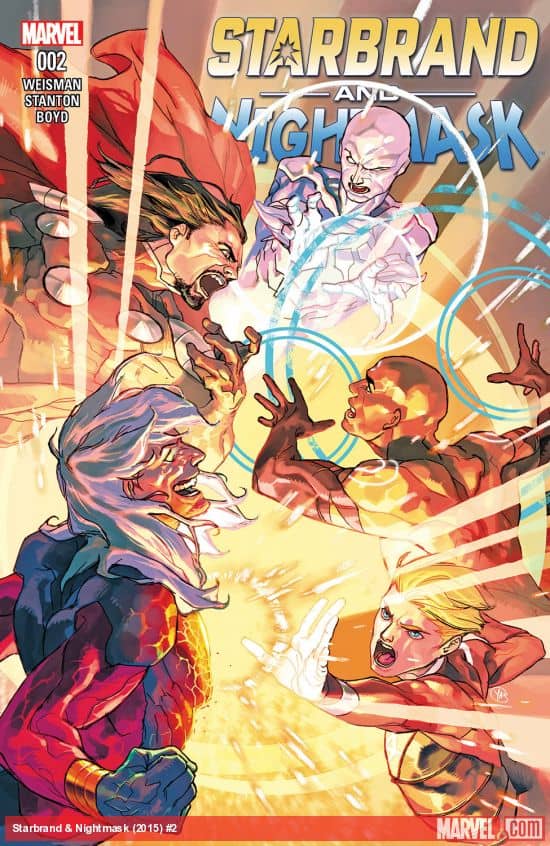 The cosmic college freshmen are out of touch with humanity. For the duo that can slip into superflow highways to teleport from one corner of the world to another and dissect explosions down to a microscopic level, handling college and the power of the higher cosmic landscape could be a worthwhile challenge for the two.

Gravitron and Nitro (of Civil War infamy) carry on with the attacking of our two heroes with added help from Blizzard, who we saw being thwarted last issue. Through Nightmask’s narration there’s a threat waiting in the wings that has to do with they way they handle larger than life situations, but Starbrand the young adult god among men makes quick work of the trio of villains with little disregard to how they’ll end up in the long run.

Nightmask acts as the conscience for Starbrand and his attempts to humble and make sure Kevin doesn’t lose himself fall on deaf ears because of who they’re facing. His violent disregard for  villains that threaten innocents is commonplace for superheroes, and it’s a legitimate question and a personal one given Kevin and his predicament of how he obtained his power in Jonathan Hickman’s run of Avengers. Too put it bluntly, both Starbrand and Nightmask are damaged goods, and college is one of the shots they have at retaining something of a normal life. While things are grim and danger always lurks (in space and close to the dorm), writer Greg Weisman gives us comedic bits to lighten the air while never losing a step when it comes to Marvel cosmic madness to plague the two with.

Artist Domo Stanton and colorist Jordan Boyd bring the right amount of cartoon like visuals to make it feel like they’re waiting for Marvel to announce Starbrand and Nightmask: The Animated Series. The details on faces aren’t the greatest, but they do capture emotions well to sell the more darker and villainous scenes. Stanton is really strong when it comes to both body types and diversity because the main background is a college campus mostly. All in all, Starbrand and Nightmask #2 fits the niche of being a  slice-of-life comic with superhero undertones to great effect. Lowering two of the strongest Marvel Heroes to such a relatable level is an achievement, and let’s hope the good times can continue for Kevin and Adam.