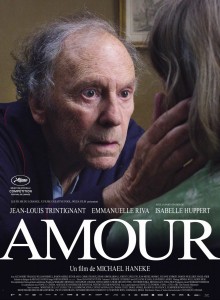 Amour is Michael Haneke’s much-awaited follow-up to 2009’s The White Ribbon. The film follows Georges and Anne, a happily married couple in their eighties. When Anne has a stroke that causes her health to dilapidate quickly, their marriage begins to change.

In Amour, we see Haneke use a much more calm and quiet approach to his subject matter. Though in many ways he is just as unrelenting as usual, he uses long takes and lack of camera movement to force us to see and understand what is happening on screen. And what is happening on screen is the complete breakdown of a relationship, of love, of companionship, of understanding and of the body. In short, we see nothing less than life falling apart before our very eyes and Haneke gives us little recourse to think about other things. Every time we witness a short funny moment (and when there’s funny moments, they’re very funny), Haneke slaps us back into reality with an equally gut-wrenching moment. By the end of the film, the audience is devastated but left without even the ability to cry over what is on screen. In addition to Haneke’s masterful direction what gives the film such amazing power are the two central performances. Emmanuelle Riva and Jean-Louis Trintignant carry probably eighty percent of the film just on their own, with Trintignant doing much of the heavy lifting. Incredibly, Riva and Trintignant, both in their eighties themselves, manage to convince us within minutes that we are witnessing a relationship many decades in the works. Trintignant’s caring for Riva’s character following her first stroke is so doting and attentive; it could have been sappy in the hands of a lesser actor and director. Instead, his performance fills us with increasing heartbreak as the situation draws to the inevitable conclusion spelled out by the beginning of the film.

Amour is a tough experience and many people will certainly relegate it to the category of one-timers – movies to be seen and “enjoyed” (as far as they can be) but never to be seen again. Watching its characters struggle with age may be unpleasant but Haneke grants them the dignity they deserve and that in itself is uplifting in a strange but palpable way.