Somehow, I have survived the world of Herbie, the Love Bug. This gauntlet has been trying, but I’ve grown as a person by making it through. Unfortunately, the movies that this magical Volkswagen is the star of haven’t really grown. Even as we reach the finale of the series (at least in terms of those movies that were released in theaters), Herbie is strictly sticking with the formula, racing a few times, changing the lives of the people who drive him, and getting into a few scrapes along the way. While the series has many dedicated fans, including my esteemed co-host Michael, I think one of the reasons why the series isn’t as thoroughly beloved as other movies or even characters in the Disney canon is because the stakes always seem very low. Herbie may get into a bit of danger in each of the films, but there’s not only any doubt he’ll survive, but there’s not enough tension to make us think otherwise.

The laid-back, low-stakes tone continues in Herbie: Fully Loaded, the 2005 film that functioned as reboot, sequel, and finale. (At least for the time being–perhaps some Disney exec will decided to revive the series in a year or two.) Disney, I imagine, had far higher hopes for Herbie: Fully Loaded, helped along by the film’s marquee star, Lindsay Lohan. As Michael likes to say, this is before she went crazy (or, putting it simpler, before her various troubles with the law, substance abuse, and paparazzi began in earnest). Lohan is (or was) a charming and spunky screen presence, a talented performer with the right material. In Freaky Friday and Mean Girls, she was well-cast and believable as an intelligent but moderately rebellious character who only pushes back against her family because she wants a bit more freedom than she already has. Lohan plays a similar role here, as Maggie Peyton, the daughter of widower Ray Peyton, Sr., a former race-car driver who’s fallen on hard times. He wants to get her a car as a post-college graduation present, but can only afford something at a local junkyard. And who should be waiting but a certain Volkswagen.

Though Herbie: Fully Loaded has quite a few problems in the storytelling, it’s easily the most assured film in the series since the 1968 original. That’s not saying much, but after the inexplicable insanity of the middle three films, I’m glad to have something that even remotely feels like it’s grounded in reality. On the one hand, sure, we have a car that has a mind of its own and does things no real car could ever do. But the Peyton family doesn’t act so outrageously that it feels like they’re human cartoons. If anything, they’re not developed enough. The script, by Alfred Gough and Miles Millar & Thomas Lennon and Robert Ben Garant, doesn’t expand Maggie, her father, or her brother beyond the first dimension; frankly, Ray, Jr. (Breckin Meyer) is something of a non-entity and barely gets more than 10 lines of dialogue. But the actors–Lohan, Michael Keaton as Ray, Sr., and Meyer–have enough of a believable chemistry to make you think they just might be a family. (A family that looks nothing like each other, but that’s beside the point.) 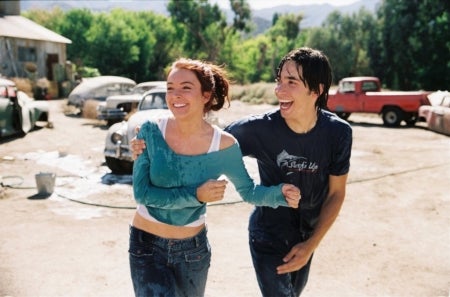 The real issue lies with Herbie, and how much the script is willing to divulge about his mythology. When Maggie first gets into Herbie–and yes, I am aware of how disturbing that phrasing is, but how else can I describe it?–she finds a hand-written, anonymous note encouraging the reader to stick with Herbie, as he’ll help them out with whatever issues trouble them. Though the movie can work as a standalone, most people are probably familiar enough with the franchise to know that, sure, Herbie can nudge the human protagonists of the other movies in the right direction. The same holds true for Maggie–her sticking with Herbie means her life becomes much better by the end–but one question remains at the end: who wrote the note? I was waiting, in vain, for Dean Jones to show up by the end of the film, reprising his role as Jim Douglas. But no such luck. I’m not sure which draft of the script introduced the note–maybe it was the first draft or the 20th. All I know is the note, as well as the mysterious and unexplained racing suit and helmet in Herbie’s trunk, never get explained. The answers may be fascinating, but why even raise these questions if there’s no payoff?

See also  What's the Difference Between a Director's Cut and the Normal Movie?

Another galling and glaring issue revolves around the film’s heavy use of CGI effects. As I mentioned on the show, there’s this idea that’s been pervading mainstream filmmaking for years that computerized special effects are the only way to accurately bring creative ideas to life. Our imaginations have been replaced by computers, except our imaginations do a better job of picturing something fantastical than real technology does. In Herbie: Fully Loaded, the prevalence of special effects isn’t surprising, but only succeeds at distancing the audience. The most complicated gag in the film involves Herbie flipping himself over to save Maggie from getting smushed by a monster truck. The stunt is so impossible, so insane, so intense that director Angela Robinson doesn’t even try to mount a real version. Instead, we get a fifteen-second shot of the stunt, all done by computers. And it looks appallingly fake.

Take another gag, one that Michael brought up on the show. Herbie essentially makes a funny face at Matt Dillon from behind his back to show his distaste at Dillon’s Trip Murphy, the film’s primary antagonist. I could go on and on and on about how ridiculous–and not in a good way–it is for Herbie to act like a human. And frankly, this movie pushes it too far, by not only giving Herbie eyes in his headlights, but eyebrows in his sun visors. There’s a point where Herbie having human qualities is cute and funny, and there’s a point where it’s creepy, false, and unsuccessful. This movie happily crosses that point almost instantly. But the gag in question, where Herbie gives Dillon a raspberry, vehicular-style, would work better if it wasn’t so clearly a shot of Matt Dillon standing in front of a greenscreen, while an effect gets animated behind him.

In general, Herbie: Fully Loaded is an amiable film. It’s not trying too hard, frankly, and I do sincerely appreciate its attempts to pretend like Herbie Goes  Bananas was just an acid trip gone wrong. But when you have a genuinely talented cast including Lohan, Keaton (who–sidebar–needs to be in all the movies, and is long overdue for a serious comeback), Justin Long, Dillon, and Cheryl Hines, and you waste them for no good reason, there’s no excuse. Even with the intriguing idea of a female race-car driver at the forefront of the film, and right around the same time when Danica Patrick was coming to prominence in NASCAR, there’s very little going on in this film. I know that Michael and others love Herbie, the Love Bug, but maybe there’s a reason why the fanbase hasn’t ever swelled too large. Herbie’s nice enough, but he’s not the most exciting lead and his movies merely range from passable to inexplicable.