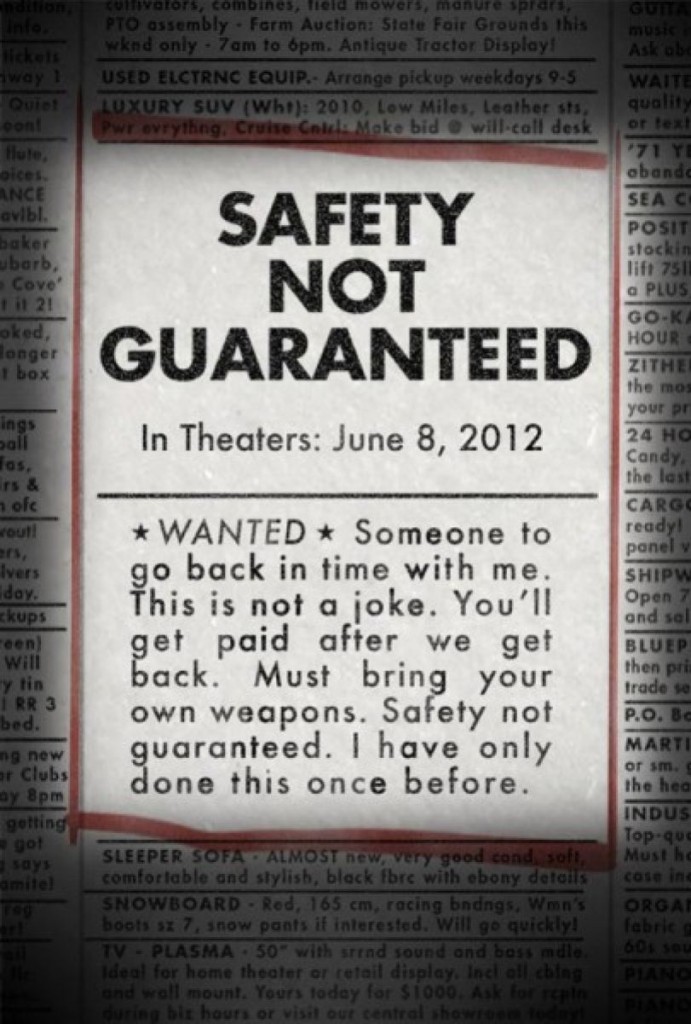 In the classifieds of a local newspaper, one ad reads: “Wanted: someone to go back in time with me. This is not a joke. You’ll get paid after we get back. Must bring your own weapons. I have only done this once before. Safety not guaranteed.” This is the central conceit to Colin Trevorrow’s quasi sci-fi feature, Safety Not Guaranteed. Strange? Sure. Absurd? Probably. Is it funny? Well, that’s pretty much guaranteed. All you have to do is buy in.

In Seattle, self-proclaimed pariah and social misfit Darius (Aubrey Plaza from Scott Pilgrim vs. The World) meanders at a magazine job with fellow intern Arnau (Karan Soni) and their lackadaisical boss, Jeff (Jake M. Johnson). When they stumble across the aforementioned ad, the three embark on a journey to find the elicitor, Kenneth (Mark Duplass). Hoping to find newsworthy tittle-tattle, the trio, especially Darius, unexpectedly find their journey to be filled with heart, loss, regret, and redemption.

The reason why the film works (and, oh, does it work) is because the film treats its ideas and its characters with genuine, heartfelt benevolence. As far-fetched as the narrative may seem, the film makes it clear that the story is only a McGuffin employed to embrace, and elucidate, its characters’ idiosyncrasies. Think of Be Kind Rewind, substituting Jack Black’s unavailing attempt to bring back the VHS with a man who thinks he can go back in time (which is, quite frankly, far more plausible).

In a roundabout way, underneath the layers of quirk, charm and awkwardness, the film is really about people vitiated by their personal histories, and going to extreme, some would say desperate, measures to do so.

Take for example, Kenneth’s strange obsession with going back in time to change something that happened in the past. When we learn what it is, it almost feels trivial and forlorn, but is it any different from Jeff’s ulterior motives?

Safety Not Guaranteed is about understanding and learning from our transgressions, rather than dreaming about changing them. The film posits the idea that time travel is a possibility, but not a necessity for a happier life.  Like Woody Allen’s Midnight in Paris, the film is about letting go of the past and doing as much as we can with what we’ve been dealt. Carpe Diem.

This simple but affecting notion is told so wonderfully well, thanks in large part to the affability of the cast. The supporting characters are surprisingly integral, providing a non-stop tone of tongue and cheek while helping to reinforce the film’s central theme. All of the characters are well fleshed out, well acted, and well funny.

However, it’s the two leads that steal the show. Plaza, in particular, exudes cynicism with her sardonic persona and her amazing ability to act with only her eyes, while Duplass is irresistibly likeable as the eccentric, offbeat mentalist. If you’ve ever wanted to see Daria Morgendorffer and Dwight Schrute in an episode of Dr. Who, Safety Not Guaranteed is the movie for you.