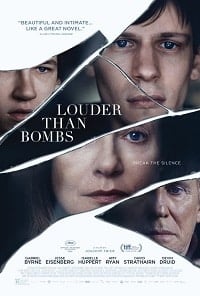 Fragments of a life. That’s what Norwegian filmmaker Joachim Trier brings into breathtaking relief in his new drama, Louder Than Bombs.  He painstakingly sifts through these fragments, seemingly disconnected and random, and re-assembles them into a cohesive emotional powerhouse.  Beautifully photographed and hauntingly sparse, Trier masterfully blends the cinematic and the literary into a personal diary of tragedy. Louder Than Bombs is an audacious and uncompromising collage of the joys and sorrows that punctuate our humanity.

Renowned photojournalist Isabelle Reed (Isabelle Huppert) was one of the best wartime photographers in the world. She captured the images that eluded her colleagues; elevating the sensational into the poignant.  But she was a restless spirit.  While embedded in the Middle East, she dreamt of returning to her family in New York.  When she was in New York—struggling to reconnect with her aloof husband Gene (Gabriel Byrne), her upwardly-mobile eldest son Jonah (Jesse Eisenberg), and the troubled young Conrad (Devin Druid)—all she could think about was returning to the action.  It was a dual life that led to crippling depression, and, perhaps, her premature death in a car accident.

The circumstances surrounding that car accident and the familial carnage it left behind are at the epicenter of Louder Than Bombs.  All that director Joachim Trier and his co-writer, Eskil Vogt, are willing to divulge is that Jonah, Gene, and Isabelle’s longtime colleague, Richard (David Strathairn), believe it was a suicide.  Gene replays vivid mental images of Isabelle intentionally steering into the path of an oncoming truck, rendered with eerie beauty by Trier’s slow-motion ballet of shattered glass and twisted steel.  Is this really what happened, or just a tidy explanation for an incomprehensible tragedy?  There are no answers here, just the fitful recollection of moments that we can neither fathom nor change. 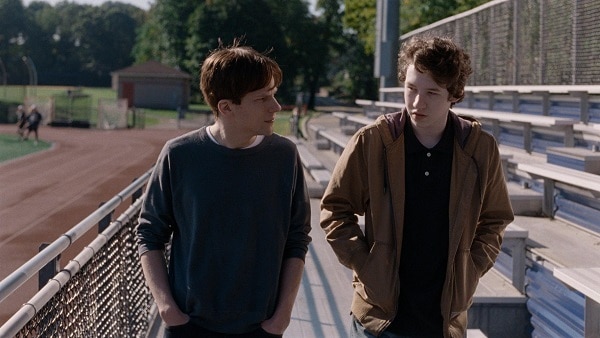 Part of the genius of Bombs, and what gives it a decidedly literary spin, is how the perspective constantly shifts between characters.  Conrad, for instance, believes his mother was the victim of extreme misfortune.  In a heartbreaking internal monologue, he wonders what Isabelle was thinking when she realized death was imminent.  Perhaps she fell asleep and awoke to find her nightmare approaching, or maybe a deer wandered innocently into her path.  Each character has their own theory regarding Isabelle’s demise, and those theories speak volumes about the beholder’s motivations and conscience.  Trier knows that the fragmented nature of life leaves gaps… gaps we eagerly fill with our own self-serving fiction.

Adding further fascination to the story is a structure that enjoys manipulating time. The story pivots on a posthumous gallery opening for Isabelle’s iconic photographs; Jonah must leave his wife and newborn baby to sift through his mother’s unpublished and disorganized work.  It’s a clever framework that affords a look into the past with Jonah, Gene, Conrad, and even Isabelle.  Each glimpse appears, on the surface, to be unrelated, but this abstract collection of moments builds to a greater understanding of the emotional fragility of these characters.  Rarely do movies reveal so much without telling us anything. 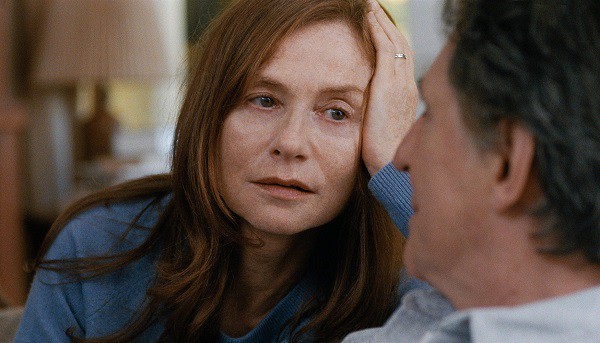 Sometimes, the same event is played out from the perspective of two different characters. One bravura scene finds a concerned Gene following Conrad home after school.  Conrad’s strange gestures, like sprinting suddenly from a convenience store or splaying his body across a random grave, appear to be the impulsive acts of a disturbed teenager.  When the same scene shifts to Conrad’s perspective, however, each gesture takes on a new meaning that lends genuine insight.  Time and time again, Trier illustrates that no matter how well you know someone, true understanding is unattainable from the outside.  Isabelle is the object of everyone’s obsession, after all, because she had the uncanny ability to capture this elusive essence in her photography.

Of course, Louder Than Bombs isn’t a perfect film.  Several scenes with Conrad feel forced, as if Trier suddenly realized he was directing an indie drama that needed heavy-handed flourishes.  Jonah’s character is somewhat secondary to the action at times, making his decisions feel more arbitrary than Conrad or Gene’s.  It would be interesting to explore the dynamics between Jonah and his wife, whom he avoids through all manner of diversion.  These are small quibbles with a story that otherwise modulates its tone and narrative perfectly. 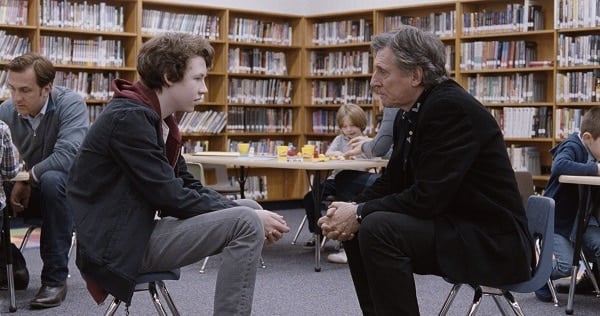 Each actor captures the humanity in their character with a modicum of words. It’s the exasperated silence of Gabriel Byrne or the desolate gaze of Isabelle Huppert that leaves your heart aching.  Even Eisenberg dials back his hyperactive persona to fit the understated mood. Louder Than Bombs is the type of keenly observed script that gives even the most inconsequential character something to do.  When Conrad walks home a seemingly-unattainable girl from his English class (Ruby Jerins), an otherwise unimportant scene becomes a powerful commentary on status and growing up.  Great scripts have a way of imbuing the mundane with crushing significance.

There are literally countless images and scenes from Louder Than Bombs that will leave you transfixed.  It’s the elevation of familiar material to the sublime through gifted, fearless filmmaking.  Though probably not splashy enough to distinguish itself on a larger stage, Louder Than Bombs is an affective family drama that deserves our attention and praise.