In recent times, newly-unearthed crimes have resulted in extraordinary levels of disillusionment with organized religion, particularly with the Catholic Church, and genre cinema has mirrored this anger with startling impact. In the face of this, the 2010 Fantasia Film Festival has put together a troubling spotlight entitled “Between Death And The Devil,” featuring six films focusing on the abuse of faith, the horrors of ideology and the corruption of Godliness.

Here’s a quick look at their lineup of 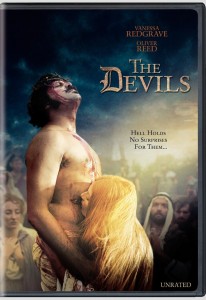 The incredible lineup is led by Ken Russell’s The Devils (1971) – one of the greatest films ever made, The Devils originally carried an X rating—and it had to be cut to receive that. The X-rated version that appeared in the U.S. was two minutes short of the U.K. release print. Even the U.K. version was cut—Fantasia labels it the bravest, most powerful, most ferociously confrontational film ever to lay assault on the criminal opportunism and hypocrisies of the Church.

Adapted from Aldous Huxley’s “The Devils of Loudun,” the story revolves around a liberal-thinking priest in 17th Century France, whose womanizing exploits make him unpopular with the Catholic clergy and whose political views make him a liability for Cardinal Richelieu. He is denounced and accused of consorting with the devil and having sexual activities with the nuns in the town’s convent, most notably Sister Jeanne, an unsatisfied, humpbacked nun in love with him.

Fantasia will not only proudly screen the most complete cut of The Devils ever seen, but will also be bringing in Russell himself, who will present the film and receive a lifetime achievement award. Managing to win a Best Director for a Foreign Feature prize at the Venice Film Festival despite being banned in Italy itself, The Devils is not to be missed. It is safe to say that over the past ten or so years, British director Christopher Smith has emerged as the new King Of British Horror with films like Creep, Severance and Triangle. His fourth feature Black Death, which borrows merrily from The Wicker Man and Witchfinder General, received positive reviews in Europe and is sure to be one of the strongest horror entries of 2010.

Set during the time of the first outbreak of bubonic plague in England, a young monk is tasked with learning the truth about reports of people being brought back to life, a mission that pulls him toward a village ruler who has made a dark pact with evil forces.

Fantasia calls Black Death a nightmarish morality play that frequently shifts concepts of right and wrong. This medieval thriller with hints of the supernatural, is creepy, occasionally violent, and carries an underlying message about the dangers of fundamentalism and religious fanaticism. Philip Ridley, iconoclastic director of The Reflecting Skin, is back with Heartless, his first film in 14 years. With great support from Eddie Marsan, Timothy Spall and young newcomer Nikita Mistry, Jim Sturgess stars a a man born disfigured with a heart-shaped birthmark pulling across one side of his face. Taunted and alone, he agrees to do some very grisly favors for the Mephistophelian “Pappa B,” who promises to remove his birthmark in exchange for…well, we’ll just have to wait and see.

Described as a delirious London nightmare that lands between Lynchian weirdness and British kitchen-sink realism.

A celebrity priest who also happens to be a fraud and a sham exorcist has a massive crisis in ideals when he comes across a genuine case of demonic possession in this eerie, subjectively shot shocker by Daniel Stamm. Co-produced by Eli Roth, word has it that this indie horror film makes first-rate use of religious doubt and religious extremism to concoct a novel horror-thriller clever enough to seduce unbelievers while raising some hairs and screams.

From the maverick writing/acting/producing/directing team behind Jack Brooks: Monster Slayer comes The Shrine. The film follows a group of young journalists who investigate a cult said to practice human sacrifice, but their ambitious ways lead them to becoming the cult’s next victims. Deciding to turn completely away from the comedy-horror sensibilities that made his previous film an international cult hit, director Jon Knautz choose this time to craft a deadly-serious shocker of pagan practices and ritual murder.

Last on the list is Possessed directed by Lee Yong-ju, who cut his teeth as an assistant director on Bong Joon-Ho’s masterpiece Memories of Murder.

Unfortunately his directorial debut shows he learned little from the Korean master. The film received poor reviews from major film festivals and is labeled a formulaic blend of Korean horror and police procedural dramas.

Synopsis: Big sister Hee-jin is trying desperately to find her missing sister. According to inhabitants of the apartment block, the girl is possessed by spirits. Meanwhile, her evangelical mother believes her to be the chosen one. When several neighbors commit suicide, it gets increasingly difficult to stay rational.