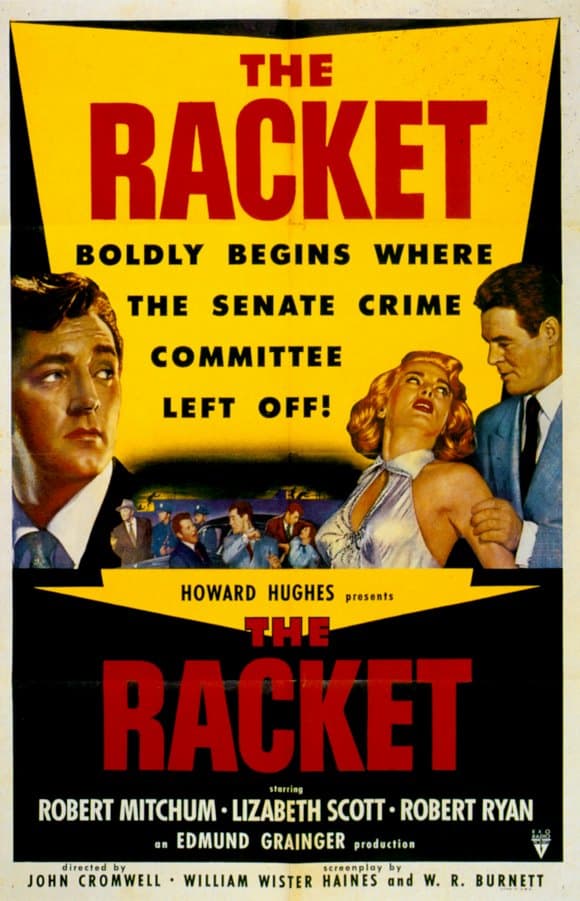 Nick Scanlon (Robert Ryan) and Captain Thomas McQuigg (Robert Mitchum) could not be more different in creed even if they tried their hardest. The former is a well known and established member of a sophisticated, well funded racketeer organization that has stakes in the looming election for county judge. The latter is an incorruptible police captain, frequently transferred from one precinct to another because his fellow colleagues don’t take too kindly to his straight shooting ways. McQuigg’s most recent relocation lands him in the one precinct where Scanlan’s operation has yet to make important inroads. Enter a multitude of individuals working for both sides of the law that will play small and large roles in bringing the long standing Scanlon-McQuigg rivalry to a boiling point: honest officer Bob Johnson (William Talman), crooked detective Turk (William Conrad), district attorney Mortimer Welch (Ray Collins), lounge signer Irene Hayes (Lizabeth Scott) and the newspaper reporter in love with her, Dave Ames (Robert Hutton).

1951’s The Racket is, in fact, a remake of a 1928 film of the same name, which itself was a cinematic translation of a stage play that starred, guess who, a young Edward G. Robinson, whose scintillating performance encouraged movie producers to predominantly cast him as a gangster in his early film roles. To any and all that bemoan the current state of creative drought in Hollywood with incessant remakes as serving evidence of a dearth of originality, the practice has been going on for a long, long time already. In any event, remake or not, it stands to reason that The Racket tackles on a subject matter that can be rather confounding for unsuspecting viewers hoping to relish in a good old fashioned yarn about two tough guys having a blistering tête-à-tête from start to finish. Make no mistake, the battle between the film’s chief protagonist and antagonist does transpire, and the scenes in which both actors face off against each other explode with tension, only that director James Cromwell and the duo of screenwriters painstakingly depict nearly every aspect of municipal corruption they see fit in order to properly, if in somewhat convoluted fashion, present the facts of the case to the audience.

See also  31 Days of Horror: 'The Bride of Franskenstein' comes alive through much technical wizardry 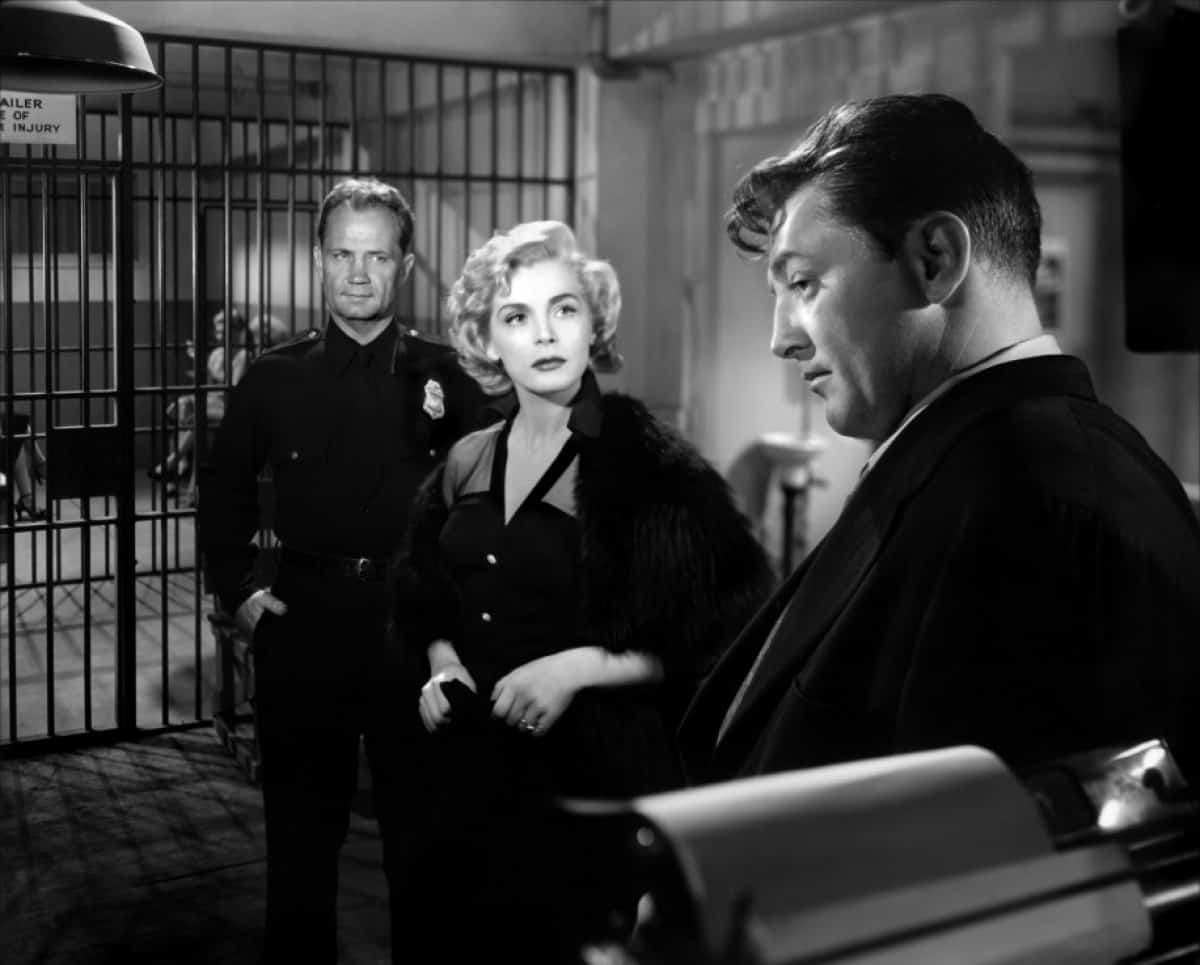 What viewers are therefore presented with is a film for which their attention is demanded. It is often argued that movies of this ilk are decorated with very complicated plots, plots via which tremendously rich, cynical, themes are extrapolated. Cromwell’s picture is just that, and in about 90 minutes, divulges a bevy of details about who is buying off who, who needs to have their jaws broken in order to toe the party line, references to a character never once seen (the ‘old man’ making all of the decisions behind the scenes), with individuals on both sides of the battle field concerned. It is only fair to say that at times The Racket is a bit difficult to follow, especially when new characters previously unknown to the viewer are mentioned in conversations between fast talking people that know all in the ins and outs about corrupt cops, politicians and judges. Some might go so far as to find the film a bit dry given the number of times two or more people are arguing about getting things done by bumping off so and so before meeting another such and such.

There are gratifying rewards to be reaped however, at least for those willing to lend the picture their undivided attention. First and foremost is an appreciation of the complexities involved in trying to stage fixed elections and buying off policemen. It isn’t always as simple as knocking on their door and threatening to kill their families. Cover-ups must be devised, secondary and tertiary people must be in the know and, in some instances, either intimidated or bought off too. Above all else, there must remain a semblance of law and order, a thin veneer of proper procedure that the unsuspecting public can easily buy into, otherwise the crooks resemble, well, crooks, and that would never fly. Is the script a little dense at times? Yes it is, but for those with the requisite patience, The Racket is really quite fascinating to watch.

The second benefit about the intricacies fashioned are the human-based consequences, from the dangers presented to law enforcers that actually strive to perform their duties undeterred, to the people that at one time were in good favour with the criminals who suddenly find themselves at the wrong end of a police arrest…or of a gun barrel. Two characters stand out most of all, those being officer Bob Johnson and singer Irene Hayes. While neither share very many scenes together, they both represent people from different ends of the spectrum that get caught up in serious hot water as a result of causing the big boys behind the scenes to bristle. Johnson is an honest cop, willing to put his life on the line to do what is right, and his courage ultimately costs him dearly, reinforcing the old saying that nice guys do in fact finish last. On the other hand, Irene was smooching with a gangster close to Scanlan, but quickly finds herself with no allies except a naïve reporter that has fallen head over heels in love with her. The best thing that can be said about The Racket is its thoroughness in presenting the extent of corruption and its personal effects. 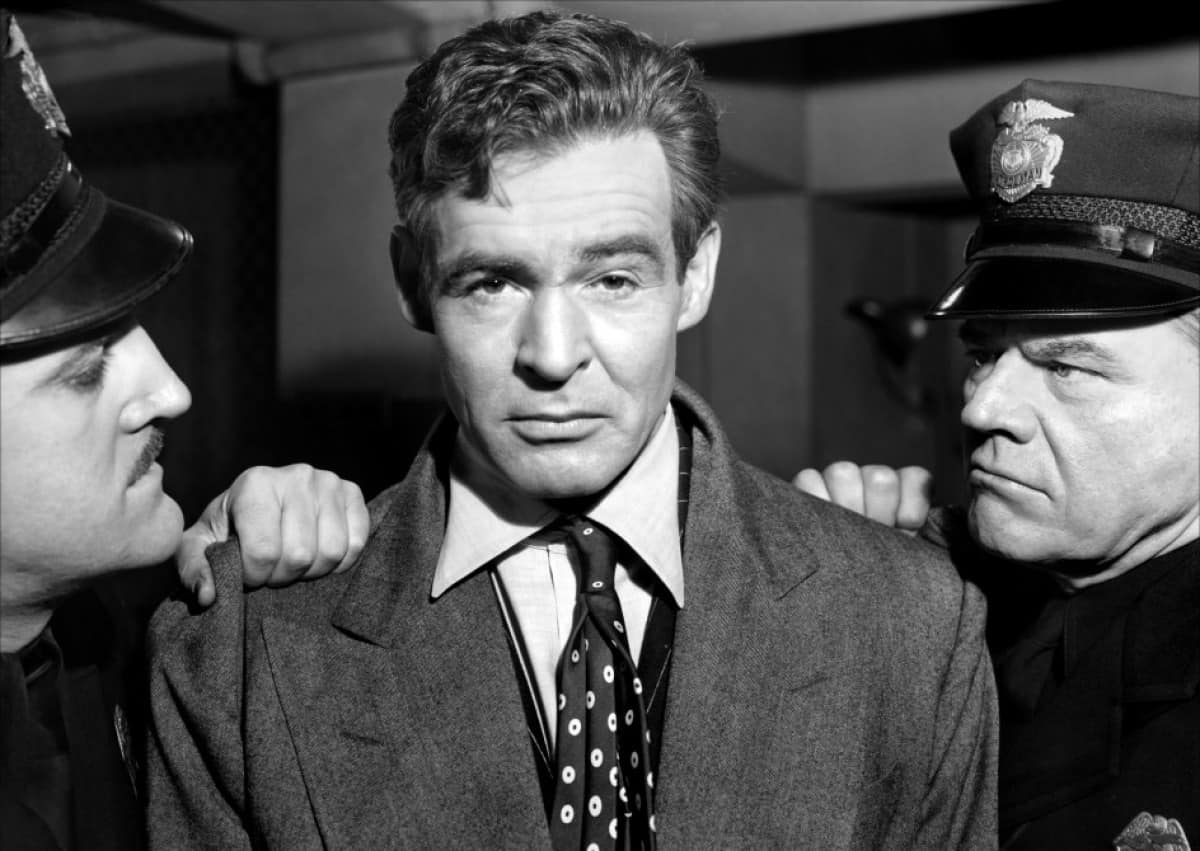 It goes without saying that any movie that stars both Mitchum and Ryan is worth an aficionado’s time. Both do admirable work here, albeit not their best material. Ryan was consistently excellent at playing rough characters, yet was even better when said tough guy exterior was mitigated by deeper psychological and emotional turmoil within (On Dangerous Ground being the finest example). Mitchum, while just as good here, is also that much more interesting a performer when his roles swim in murkier waters. His Racket role is the virtuous, no-nonsense police captain. He plays the part very well, but he’s more fun when playing more easily corruptible figures.

If there is a sticking point, it is the inconsistency is the visual presentation. Less fault should laid at cinematographer George E. Diskant and more on the fact that the movie resulted from the directorial efforts of many people. The source of the issue begins and end with the fact that, as is gloriously stated at the very start of the movie, The Racket is a Howard Hughes production. Cursory research reveals that Hughes was notorious for meddling with movies after the original shooting schedule was complete, demanding that new scenes be included to alter various plot points (this probably explains some of the script’s dryness, in fact). Nicholas Ray (On Dangerous Ground) and Tay Garnett (The Postman Always Rings Twice) were extraordinary directors, but when taking care of a handful of scenes each, in addition to not only the efforts of the original director John Cromwell but also those of two other directors, the result is a movie that lacks some cohesion. Remarkably enough, the overall story is still solid and easy enough to follow, but from an aesthetic point of view, some scenes are stunning to behold, such as McQuigg’s chase after two thugs in a car parking complex engulfed in shadow and the subsequent rooftop fist fight, whereas other are very flat, like that climax at the police station.

Dense but replete with intriguing and dramatically rewarding nuggets, anchored by a strong cast that delivers splendidly, and occasionally beautiful to look at, The Racket stands as a reasonably accomplished procedural. For the obvious reasons stated already, it lacks a unifying texture, but that problem, while at times evident, is not enough to drag the entire movie down. If anything, even if the plot is a little thick, Robers Ryan and Mitchum are themselves reasons enough to stick around.

See also  The Artful Roger: A Thank You To Roger Ebert