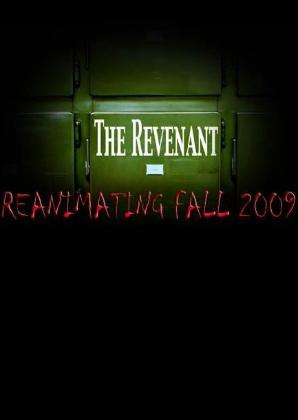 This kind of assertion gets thrown around too much, but The Revenant has a real shot of becoming a cult classic. It has enough gore and violence to satisfy the horror set, but it also has a sharp wit, a surprising heart, and a unique story.

Directed by Kerry Prior

Undead horror has had an unprecedented revival in recent years. Zombie fever has proved surprisingly resilient, and this recent vampire craze shows no signs of abating. It’s easy to become cynical about the sheer amount of zombie and vampire entertainment going into production, but amidst the glut of sub-par cash-ins, some inspiringly original films have managed to find an audience. The Revenant, if there’s any justice in this world, will be one of them.

The film opens at our protagonist Bart’s (David Anders) funeral, where distressed family and friends gather to mourn. In attendance is the central cast: loud-mouth best friend  Joey (Chris Wylde), girlfriend Janet (Louise Griffiths), and Janet’s friend (and Wicca) Matti (Jacy King). The three share some drinks, Janet and Joey share a night of passionate remorse, and Bart wakes up in his coffin. The film that follows is hard to categorize. With its mix of dark comedy and genre reverence, it shares a common bond with 2004’s Shaun of the Dead, but The Revenant plays more like a twisted comic-book origin tale than a horror film. This is in part because it’s approach to horror is so unique. Bart may wake up dead, but he’s the same person he always was, with no impaired brain function, insatiable flesh craving or glam outfits. And what is most immediately refreshing about Revenant is the fact that writer/director Kerry Prior doesn’t feel the need to label Bart’s affliction. The obligatory research is done upon Bart’s return, and the creature Bart most resembles is definitely a vampire, but only a very few of the established rules apply. As such, there’s no baggage that comes with Bart’s story–it’s not a vampire tale, it’s a Bart tale. And the sense of discovery and surprise the film derives from this ends up being one of its greatest assets.

It wouldn’t be fair to go into specifics, but over the course of the film, Bart grows into a hero of sorts. What’s particularly satisfying about the transition is how natural it feels; Bart is just a good guy, and faced with some new problems, he simply chooses a morally conscionable route. This is no Boondock Saints–though there is some top-notch lampooning of that film– as the story is really about Bart discovering what he is and simply coming to terms with it. The central theme here is power, how it changes us, and the toll it takes. Above all, though, The Revenant is hilarious. David Anders and Chris Wylde both turn in great performances that give their characters depth while keeping the audience in stitches. Griffiths and King aren’t given nearly as much to do, but they both hold their own. There’s also plenty of horror-comedy here, including a truly inspired severed head scene and a brutal spat between Bart and Joey that is nothing short of transcendent. The film handles dramatic scenes surprisingly well, balancing the serious and light admirably, but it’s brilliant when it manages to hide a serious moment under layers of sight gags and profanity.

The special-effects deserve special mention as well. It looks like Kerry Prior has an effects background, and it definitely shows in the presumably low-budget magic his team worked here.

This kind of assertion gets thrown around too much, but The Revenant has a real shot of becoming a cult classic. It has enough gore and violence to satisfy the horror set, but it also has a sharp wit, a surprising heart, and a unique story. If you’re feeling a bit of undead malaise, here’s your cure.