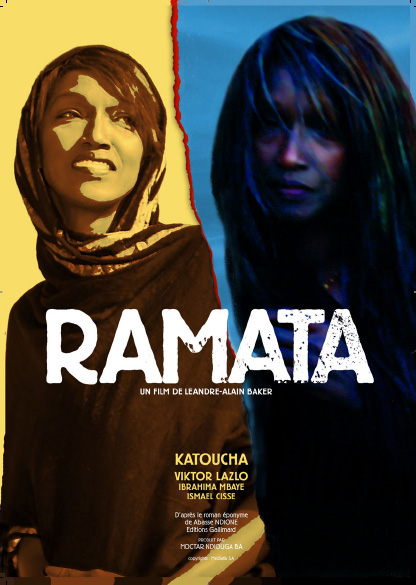 A rare African co-production that forgoes European assistance, Ramata is a sombre tale of love, loss, and despair. Directed by Léandre-Alain Baker, and based on the novel by Abasse Ndione , the film follows a tragic aging beauty on her downward trajectory. Ramata, 50 and still endowed with breathtaking beauty, is on the eve of celebrating her 30th wedding anniversary and the birth of her first grandchild, when fate drops its card. Whisked away on a late-night spree in a stolen taxi, Ramata finds herself in a seedy bar in a dark neighborhood of Dakar, where she gives in to temptation at the hands of the young Ngor Ndong. What follows is the not unpredictable fall from grace, that costs her her husband, home, and honor. Whether her husband, a powerful and proud Minister of Justice, is unable to deal with Ramata’s infidelities or the blow to his reputation is unclear, adding to the themes of power, class, and appearance carried throughout the film.

Far more interesting than Ramata’s social descent is the dark, muted portrait of love, fate, and Africa itself. The director explains that he chose to turn away from usual portraits of Africa as eternally and brilliantly sunny, and inspired himself with a darker color pallet accentuated by shots of shadows, interiors, and night. Much of what happens here is cast against this pallet, and the bleakness of the story resounds perfectly. There’s a sleekness to Ramata – her skin, her clothes, her car – that one associates with a charmed existence, but slowly, carefully, it is inverted, and her violence against virtue is woven in. The resulting tapestry finds its strength in a woman unwound, maddened with despair, and hysterical with unrequited passion. Add to this a malediction twisted in towards the end of the story, and the final element of surprise, and you have a delicately crafted film well worth watching.